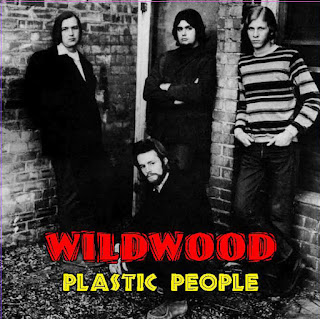 Disaster Amnesiac would not hesitate to give a bro hug to SF Bay Area/NorCal Rock historian Alec Palao, especially after spending a few weeks digging into Alec's standout release of the great late 1960's-early 1970's Stockton, CA band Wildwood. Wildwood's early Heavy Rock sound has plenty of elements that make for a satisfying listening experience.
Take, for example, the organ playing of Mark Ross. His keyboard sounds dominate a lot of Wildwood's melodies; one can pretty easily assume that he did a lot of the initial writing for the tunes. That said, while his organ sounds are very much present and centered in the mix, Ross also does a great Rock Band job of not trying to dominate the overall group feel of said tunes. This kind of heavy organ playing, starting with groups like Vanilla Fudge, then on through subsequent developments such as Steppenwolf, the Doors, Bloodrock, Uriah Heep, and Deep Purple, before pretty much dying out by way of overt virtuosity, is somewhat sadly missed. Especially when one hears his hooks on tunes like Mary Midnight or Swimming. The organ provides really nice melodic color and punch therein.
If you're more of a vocally-centered listener, you'll probably be more effected by singer/bass player Frank Colli. His vocals, delivered in a full bellied, macho, deep tenor, are of a quality now associated with the likes of Nickelback or Creed or "Grunge" parody moves. Palao name checks Ray Charles as being an influence on them. Disaster Amnesiac hears maybe even a bit of Tom Jones style croon. Along side of the Wildwood reissue, I've been digging into last year's great In the Red Records retooling of The Consumers LP. It's pretty fascinating to reflect upon the differences that characterize au currant styles, just a few years apart. That comparison aside, Colli's voice works well within the claustrophobic, heavy, arcane Wildwood sound. His bass playing sounds typical of the post-McCartney style: not simply plunking away at the back of the mix, but turned up and driving, very much an active part of the overall rhythmic/melodic Rock feel.
Guitarist John Turner plays great rhythm throughout, often twinning lead lines with Ross's organ licks (Steel Cathedral), or getting gritty on road jam Gotta Keep Movin'. His solos are tasty and concise, never veering too much out into the Raga Rock modes that would have been somewhat easy to make at that time. Hear Choo Choo Thunder for proof of that. Turner's sounds always serve the songs' darkened moods, even as they step out from the rhythm section and wail in solo feature mode.
Also of service to Wildwood's tunes is drummer Tim Mora. Mora's style features a simplified swagger, leading from a heavy right foot bass drum pound. The simplicity comes from his uncluttered playing atop the kit. Mora's playing is remarkably restrained, and all the more eloquent for it. A comparison to Zen master Simon Kirke is in order, Mora's lack of fussiness being only a few clicks more than Kirke's. He also rocks a great cowbell, along with clear ride cymbal playing.
Taken as a whole, Wildwood's sound is a dark, organic, much heavier form than most of their contemporaries (1968-69), and a fine example of what was then emerging as the next development in what were Golden Years for Rock bands and their unique approaches to music making.
As a bonus, Plastic People features a second disc, made up of Wildwood tracks that sound a bit more "produced" (not as gritty or compelling), Wildwood precursor The Mal-T's (suburban surf, made nascent heavy by said right foot of Mora), and strange tunes by band compadre Chalker (billed as a a nutty associate; his tunes remind Disaster Amnesiac a lot of Detroit acousti-loon Nicodemus). All these are added bonuses to the meat of the matter, Wildwood's late 1960's incarnation, a fine, early Heavy Rock band.
Did these guys ever play with Sacramento's Public Nuisance? Now, there's a show!
Posted by Mark Pino On Drums at 3:22 PM

Sounds like a really great set, including the early surf stuff. Am now in the process of searching it out UK-side . . . thanks, DisAm!

Hey, Row! It's really good! Stockton in the house!

Stockton in the house indeed! Thanks, Mark for such an insightful and thoughtful review- it's as if you were there 40 Plus years ago. Great ears- much appreciated!

Thank you Mark, Great review. Spot on my brother.

Mark and Frank-thanks for taking time to read and respond! You guys had a great, ass-kickin' band. Major kudos.

I agree fully with your review. This is one of the best archival releases I have ever heard and I genuinely think Wildwood could have been big. Shame.

I am going to use the track 'Plastic People' in the impending post/comp on my blog: aftersabbath.com

Rich-I just now saw your comment, and have bookmarked your blog! Cheers!