As I'm sure most are aware, the San Francisco Giants won the 2010 World Series. Their road to this monumental victory was not an easy one, and it was traveled by a classic band of misfits, worthy in all ways of Johnny Damon's 2004 Red Sox "we're idiots" sobriquet.
As amazing as it was to watch the Fall Classic unfold, there was an event that occurred in the NLCS against the Philadelphia Phillies which in some ways, seemed even more amazing to me. Giants' game 6 starter Jonathan Sanchez had nothing. No control. No command. He looked lost from about two batters into the game.
In the second inning, one of his pitches hit Phillies second baseman Chase Utley. This beaning, whether intentional or not, had great significance for the game 6, and for the Giants' eventual historic Championship win.
Utley and Sanchez had already established a history of antagonism; Sanchez threw behind Utley in an at-bat in 2009. There was no love lost between the  two. As such, Utley, while taking his base, reached down for the ball and flipped it toward Sanchez. Sanchez and Utley "exchanged words" once Utley reached first base. It was clear to me that "fuck you" was uttered by Sanchez, as he walked off of the mound toward the agitated Utley on first.
Eventually, the benches cleared, and play was stopped for at least five minutes. During the melee, Giants reliever Jeremy Affeldt did not join the fray. FOX Sports cameras at one point panned to the bullpen, showing  Affeldt calmly throwing  warm-up pitches. By time the  brawl had been stopped, he was ready for relief. Sanchez was promptly pulled, and Affeldt proceeded to pitch superbly, giving the Giants the relied they needed, and keeping them in a game that they needed to, and eventually did, win.
A question: did Sanchez deke the Phillies into losing their collective composure, just long enough for Affeldt to warm up, incredibly earlier than he probably expected to, thus giving  the Giants a chance within a game that was rapidly slipping from their grasp? The answer to this one is probably lost to history, but I've pondered it a lot since that Sunday night in October, 2010.
Whatever the truth of the matter really was, there were Codes at play, ones that Jason Turbow and Michael Duca set out to describe in The Baseball Codes. For example, Affeldt's choice to remain in the bullpen could be seen as a violation of one of the codes expounded upon in the Baseball Codes.
The Baseball Codes sets out to shine light upon the unwritten rules of baseball, rules that players' careers live and die by. Much like life in greater society, these codes provide both guidance and boundaries to the interactions that make up daily life. One could argue that without codes, people are often left clueless as to how to make their way through the tasks at hand, whether in baseball or any other pursuit.
Dekes, tagging etiquette, sign stealing, rookie vs. veteran dynamics, retaliatory tactics,  and a plethora of other baseball codes are explained and examined in depth within this very entertaining book. The authors did a great job of researching these inner workings of baseball, with anecdotes and opinions from several generations of players, managers, and broadcasters.
The insider information within this book provides many revealing glimpses into the sport that I have come to love so much, the sport that best exemplifies how life really works in U.S. society.
Posted by Mark Pino On Drums at 6:14 PM No comments:

I picked this one up after reading Byron Coley's review of it in the Wire, in which he compared it to the work of Doug Snyder and Bob Thompson.
Happily, these two players do seem to dance together in much the same way that the early 1970's Ohioans did, locking guitar and drums parts within an improvised setting.
Touchton's guitar sound often reminds me of Sharrock at its most unadorned (i.e.guitar to amp without pedals). At other points, his sound makes me think of Wire or other post-Punk bands, filtered through a Free Jazz envelope.
Backer's approach to the kit is sometimes note-dense and busy, sometimes sparse, always very responsive to the moves that Touchton makes with his ax. At one point, given a space of  total silence from Touchton, he starts to quote Han Bennink's great Nerve Beats concept!
The format of this release (two short tunes on a short tape) and its bare bones packaging, give it an endearing d.i.y. feel. The tunes' brevity makes it very approachable. I've often thought that improvised and noise music are rapidly becoming truly Folk mediums, and this tape fits very nicely into that concept.
Posted by Mark Pino On Drums at 12:57 PM 1 comment:

Some years back I had a conversation with a tenor sax player who stated bluntly, "I'm not feeling Anthony Braxton".
I, however, am very much feeling Mr. Braxton. Disaster Amnesiac is a fan.
As such, it's been easy and enjoyable to dig into the four discs that make up Old Dogs, Braxton's duo recording with long-time cohort Gerry Hemingway. Clocking in at well over four hours, Old Dogs is a king sized dose from these veterans. Both have built up lengthy reputations as top flight composers of Jazz/Creative Music, along with being improvisers of the highest order. It is their improvisational side that gets aired on this document. As stated in the liner notes, the only given parameter was that they played as long as a large hour  glass was running. These old dogs take full advantage of this given freedom, touching upon all sorts of different feels, spaces, and approaches within the duo context.
Each disc contains one lengthy piece, in which Braxton and Hemingway range from playing silence filled passages to dense and furious exchanges.
In improvised music, the listening thrill comes from paying close attention to the sounds being generated by the respective players' approaches. One of the great things about Old Dogs is the amount of such sounds that the duo are able to conjure up within each piece. Braxton utilizes seven different reed instruments, and Hemingway adds laptop samples, marimba, and electronic drum pads to his acoustic kit. Despite the scant number of players, the tonal options are quite varied.
These two have made careers out of researching and performing "extended sounds", and they utilize this research to the fullest extent on Old Dogs. Braxton ranges from repetitive arpeggio playing to primitive bleating, from complex overtone blowing to simple key slapping, all the while staying within his signature stylistic melding of players whose sounds he adores (Ayler, Gilmore, Allen, Coltrane, Marshe, Desmond, etc). Not to say that Braxton lacks a personal tone; one can tell it's him playing  pretty quickly, especially when he digs in with the alto sax. Hemingway's kit playing is amazing. His is a highly personal and masterful approach to drum set, defined not so much by the extent of options to be hit (size) than by choice of which kind of object to do the hitting (color). He uses sticks, brushes, mallets, hands, towels, anything to coax the right sound from the skin and wood of the drums or the metal of the cymbals and stands. Also of note is his use of space. Even within his densest poly-rhythmic thickets, there is always a feeling of room, of each note given just the right amount of time to ring out.
The material on Old Dogs is amazingly varied, highly listenable, and very fun indeed. If you're at all interested in improvised music, you'd do well to try and feel it, too.
Posted by Mark Pino On Drums at 8:04 PM No comments:

To my great pleasure, Fancy Space People have announced that their LP will arrive here on earth shortly. An advance landing has occurred by way of a free download at their Facebook page:
http://www.facebook.com/pages/Fancy-Space-People/256599767850
If there is a better band on Planet California, I'm not aware of them. So many great elements coalesce within Don and Nora's vision: Glitter-stomp beats, Morricone chants, Psyched-out guitar lines, pauses worthy of Laughner getting spaced-out at Pirate's Cove in 1975, all framing Nora's wonderful warble.
They claim that they have come to save the human race. All I know is that I'll be saving a few bucks in order to buy the LP when it descends from the Heavens.
Posted by Mark Pino On Drums at 8:01 AM 2 comments: 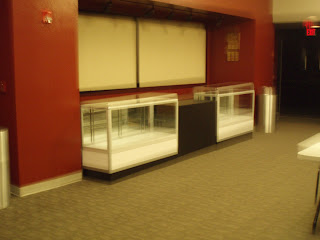 Having missed Jandek's SF Bay Area shows a few years back, I was determined to make the trip Davis for this one, despite scant advance notice.
Davis Veterans Memorial Hall seemed to be the perfect venue for this show. The feel of this small theater, with its 1950's design and intimate vibe, gave the proceedings less an air of "Rock show" and more of that of a recital. Given Jandek's very non-show biz approach, that seemed fitting. 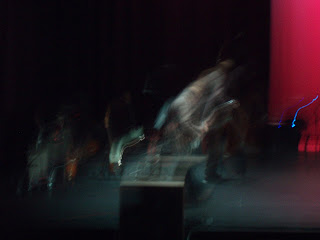 The band consisted of Jandek on keyboards (Yamaha keyboard and Korg synth), accompanied by Davis musicians Christian Kiefer on guitar, Alex Jenkins on drums, and Greg Brucker on double bass.  This trio proved to be amazingly adept accompaniment for the Corwood Representative.
When I've listened to Jandek's recordings, they have often seemed to be made up of improvised music coupled to his Outsider poems of longing and loneliness. Not so at Davis, at least musically. The set's tunes were pretty clearly worked out header figures, with either Brucker or Jandek generally leading them in with small sound kernels, after which Kiefer and Jenkins would commence with their accompaniment. Jandek's keyboard sound was somewhat reminiscent of the 1960's approach of Sun Ra; he proved pretty adept at coaxing chiming bell tones out of his Yamaha and more smeary tones from the Korg. Kiefer's playing was a joy to hear. He alternated between a high, lonesome twang and blasts of pure post-Rock noise (on banjo, even!), all the while keeping his tone and playing approach very "Corwood". Brucker utilized loops and deep, long, bowed tones to provide an often surreal undertone. Jenkins, using a tiny kit of floor tom, djembe, trash can, and small percussion, was particularly amazing, in the amount of tone and texture he was able to coax from his battery.
And the overall group sound? A delicious blast of primal, primitive ESP-type scree, at times quiet in order to accommodate Jandek's poems, at times blaring away to bring their impact home. The cacophonous passages hit Ayler/Godz levels of pure improvisational fire and grunge, and the vocal passages allowed for Jandek's words to have their full despairing and alienated effect.
After almost two hours of playing, the group finished off with a solemn, chime-ey instrumental, and Jandek slowly closed his poetry book. They walked off, the house lights turned on, and the assembled crowd shuffled out, for the most part silent, for the most part smiling. 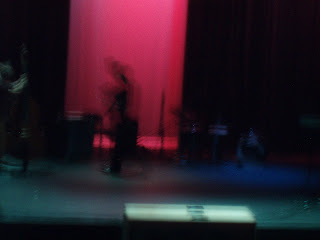 Posted by Mark Pino On Drums at 8:41 AM No comments:

Recently I traveled to Britain. It was a lovely trip, and London is still blowing my mind, three weeks removed.
Along with staying at a great little hotel downtown, my wife Melissa and I stayed with our friends Debbie and Joel, who live in the wonderfully named suburb of Harrow on the Hill. Joel asked me at one point to list and email him my top twenty songs. At first I balked, but Joel can be a very convincing guy!
This list represents what felt like an honest attempt. My main criterion was: "what songs can I recall that I've either played obsessively or can listen to at any time?"
I hope this list will reignite my long-ignored music writing blog.