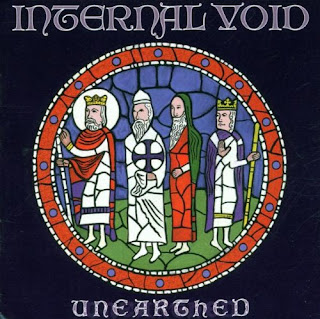 What does light mean to you? Does the way an environment's light falls effect your perception of music? Disaster Amnesiac finds these questions to be relevant while enjoying Internal Void's incredible offering from 2000, Unearthed. It goes back to listening to music during the 1980's, mostly as I tooled around the suburbs of Northern Virginia in a beat up Datsun with a functioning tape deck. There were times, especially in autumn, when hues of the sunlight and their attendant falling upon the environment would mesh with music in  a sublime perfection. Over the ensuing years, Disaster Amnesiac has often felt those same feelings when I hear bands the unique sounds of Maryland Heavy Rock, as practiced by Internal Void, Obsessed, Spirit Caravan, and others. There is just something about the way that the groups that come out of that scene shape their melodies and harmonies that evokes the light of the Eastern Seaboard of the U.S., at least for me.
Those kinds of "insights", obviously purely subjective, may not translate well into a good review, so please allow Disaster Amnesiac to try and be a bit more objective as I attempt to enthuse about how great an album Unearthed is.
First off, guitarist Kelly Carmichael utilizes such great, heavy tones within this set of tunes. Opener With Apache Blood kicks things off, showing his melodic strength before turning into some bruising riff crushes. It sounds as if he put a lot of work in to getting a really sweet tone, perfectly fuzzed but still clear and focused. This action continues on tracks like Pint Of Love and Too Far Gone, as Carmichael puts the lessons of Iommi and Weinrich to great use. Disaster Amnesiac is fascinated by his Allman-flavored sweetness on In A Bit Of Jam, and figures that Kelly is the kind of guitar player that would be well appraised of Dicky Betts' love of Charlie Parker, and be conversant with them, too. Within the Heavy Rock form, there's just no excuse for underdone guitar playing. On Unearthed, Carmichael is seriously cooking.
Obviously, a Rock band also needs a moving, breathing rhythm section, and Internal Void was certainly blessed with one at the time of Unearthed in Adam S. Heinzmann on bass and Ronnie Kalimon on drums. The latter  puts on a veritable clinic in Rock drumming. He's heavily involved in all of the arrangements, and just slays on tunes such as Blindside, Chapter 9, and Beyond Anger, to name just a few. This involvement is always grounded in superior time keeping, and it's simply amazing. The total kick ass drumming on the album alone is worth the price of admission. Listen and marvel. Heinzmann does not slouch on top of his battery mate's chops; the way that he bridges the drums to the guitar riffs has all of the physical push and pull that's necessary with the approach to Heavy Rock. His harmonies with Carmichael's riffs is so sweet: listen closely to With Apache Blood.
Internal Void singer JD Williams utilizes all of the talent emanating from the instrumentalists within the band as a launch pad for a fine performance of his own, delivering lyrics that are Doom'ed, wry, definitely on the darker side, but that never come across as despairing. Knowing is a good way to describe them; fully aware of, and seemingly effected by, the "permanent down" that Bill Ward mentioned, but never submitting to the darkness. His vocal tones, somewhat reedy alto mostly but at times gutturally slung out, fit in with these moods, musical and lyrical, perfectly. Disaster Amnesiac always marvels at his delivery on Too Far Gone and Chapter 9, but, as they say, it's all good throughout.
Time passes: Unearthed is almost twenty years old. Light fades: as Disaster Amnesiac peers out the window this evening, the sun sets, its waning light coloring the sky over the SF Bay in an orange hue, somewhat reminiscent of similar ones seen on freaked out late afternoon drives in doomed Prince William County. Heaviness endures: snag a copy of this great record from Internal Void and hear that for yourself.

Posted by Mark Pino On Drums at 5:10 PM No comments:

Greg Ginn-Let It Burn (Because I Don't Live There Anymore); Cruz Records, 1994 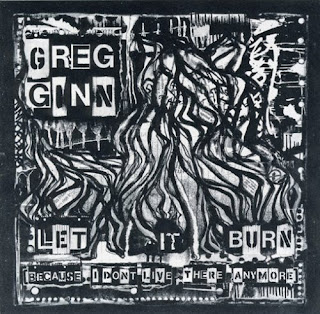 If for no one else than Disaster Amnesiac, the requisite amount of time has passed with no real news from Greg Ginn and SST Records. I find myself wondering, "what's up with Ginn?" a lot these days. The past silent stretches have often been the result of fucked up contracts with distribution companies or conceptual re-ordering of the musical variety; Disaster Amnesiac can't help but wonder, though, if the internecine war of three years back within the SST/South Bay gang put such a damper on Greg as to make him cease musical activity all together.
Being the Ginn obsessive that I am, I've had to turn to older releases for the need Ginn-tar fix that has been an almost daily habit for over thirty years now. Thankfully, as we all know, there's TONS of that floating around, a prime example being his 1994 solo LP Let It Burn (Because I Don't Live There Anymore).
For the longest time, Disaster Amnesiac has pondered the title of this great release. Is it a sarcastic riff on the "Indie-Nation" heroes The Replacements Let It Be title? A very unsubtle jab at the then-crumbling micro-world of SST and his possible true feelings about it? Obviously, only Ginn knew for sure, and he's not one to bother talking about those types of aspects of his body of work. Song title such as Drifting Away, I Don't Want It, and Lame Excuses have always struck this listener as possible clues to the overriding theme, and the the lyrical vitriol of Taking the Other Side and Destroy My Mind seem to back this up. Whatever Greg was thinking about when he penned these lyrics, it was most definitely pissing him off to a huge extent.
In speaking of the lyrics, the subject of Ginn's singing voice, pretty much debuted here, must come up. It's not as though Disaster Amnesiac has ever had a conversation about it, but I've pondered what others have thought of it. I like it a lot. Way more warble-ey than Rollins', obviously, and without the hard confidence of Henry's Flag declamations, but fine for Punk Rock statements and said vitriol. The lyrical subjects aren't pretty, so why should the singing be so? For the Ginn fan, it's just kind of fun to hear him take a turn at the mic, too.
If you've ever seen the footage of Black Flag in Decline of Western Civilization, you'll recall that while the rest of the group was being interviewed at the Church, Greg had his Mosrite in hand and was doing scales during part of that clip. I've always figured that that portion was telling re: Ginn's work ethic when it comes to, especially, the guitar. Say what you want about him, but in many ways, he's all about the music, and moving it forward. Another fascinating aspect of Let It Burn is the ways in which Ginn's developments at that time are on full display. In a fine interview with Mark Prindle in Citi-zine, Greg described his early 1990's fascination with the Techno of that time, and how he'd play along with radio broadcasts featuring that style. On tunes such as Military Destroys Mind/Body, In Your Face Motherfucker, and Hey Stupidface, he fuses Techno drum and rhythm programming to his burning solo riffs. I've been listening to this LP for almost twenty years, and never tire of its blending of Hardcore Techno with Hardcore Punk Rock musical aesthetics. Ginn's guitar voice is diminished not one whit within these moves, and his bass playing is funky and loopy within its moves. The more traditionally rocking tracks such at Let It Burn, Taking the Other Side, Exiled From Lame Street, and Drifting Away all feature more burning guitar solo statements, exemplary tight riffs, and really moving bass/drum rhythm section interaction. I Don't Want It blazes at levels equal to any of the great mid-late period Black Flag pieces, as does Destroy My Mind with its cool cowbell hits and odd, psychedelic voices floating in the background. Indeed, Let It Burn is, across the board, just as finely rocking as any Flag.
Who knows what the future holds for Greg Ginn and SST Records. Disaster Amnesiac has been patiently holding on for any news from them for the past couple of years. It seems as though, like many other labels and performers of that generation, the output is slowing down. Still, it'd be great to hear some new stuff from him and whichever cohorts he may have at this time. Until that happens, and hopefully soon, Disaster Amnesiac will have to enjoy the great merits of releases such as Let It Burn (Because I Don't Live There Anymore). There's scads of fun sounds within it and just about any other project he gets going. Still, I'm kind of begging for more, here. Any time you want, Greg!