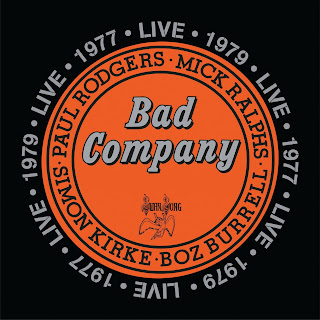 Admittedly, and in light of the recent law suit by whoever runs the Randy California estate vs. Led Zeppelin, Disaster Amnesiac felt a bit cynical upon hearing about this release. I just imagined the financial team at Swan Song (is there such an entity?) casting about for new revenue streams in order to pay back that filthy lucre gained from Plant's least favorite wedding song. It seems as though Zep may have prevailed, though, and, luckily for Hard Rock fans, we still get this great release of two stellar shows from the mighty Bad Company.
There is a photo in the CD booklet from Live 1977 & 1979, featuring recordings from Houston TX and Wembley, UK., that is instructive: it features the four members of Bad Company, live on stage in pretty close proximity. All of the elements of the composition show a really stripped down approach, and, indeed, that's really what the band is famous and/or notorious for. Oftentimes, their sound feels skeletal to the point of Minimalism, and oftentimes this is what people either love or are annoyed by.
Disaster Amnesiac is in the former camp, all the way. What I love about Bad Company's sound is the amount of room that they always left for the listener's perception to fill in. The band keeps that vibe going on both of these sets. What seems to be important documentation here is the way in which their tunes had gained in strength after they'd become a heavily touring band. Tracks such as Burnin' Sky, Shooting Star, Bad Company, and others have this additional weightiness to them herein. All of their signature tunes groove with more depth as Simon Kirke adeptly shows how much a restrained approach can move a band's sound. Mick Ralphs really shines as well. Disaster Amnesiac has gained new appreciation for his playing as I've listened to 1977 & 1979. The tones that colored his riffs were deep and quite tasty. Both Ralphs and bassist Boz Burrells' sounds feel so much bigger and meatier in the live context. Speaking of beefy, one must really hear Co.'s incredible version of Hey Joe. All that is great about Paul Rodgers shines brightly on this version, captured in Washington D.C. on a "special occasion". His emotive, masculine croon is bolstered by a way gone solo, as his pals pound the song home behind him. Rodgers is one seriously talented Rock Star, and much of the joy of hearing Live 1977 & 1979 comes from digging on that fact.
The 1979 portion features a few tunes that were relatively new at that time in Oh, Atlanta and Rhythm Machine, and these feel somewhat underdone. However, the also new-at-the-time Rock 'n' Roll Fantasy totally redeems them. What a kick ass song! Disaster Amnesiac is old enough to remember when it was a hit tune, and has always loved it. Again, showcased within the live setting, it features added weight and groove, and absolutely slays.
Times are tough all over, even for the Giants of Heavy Rock, presumably. I'm not sure that the blokes in Bad Company or Swan Song are all that desperate, though. Still, if you're a fan, your initial monetary investment in Live 1977 & 1979 may pay off big in aesthetic dividends. 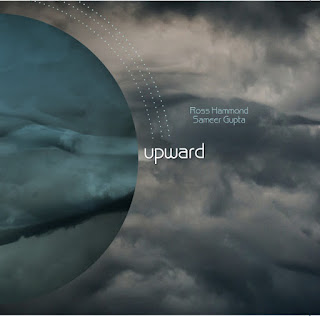 Upon receiving Upward, Disaster Amnesiac felt just a bit of trepidation regarding reviewing it. Any music that features tabla gives me a feeling of hardcore reverence, and there was definitely worry that I'd be amiss in describing the tals and tones from Sameer Gupta's playing on the disc.
Thankfully, those fears were swiftly allayed by the sounds of Upward. The music that Hammond and Gupta make together is so warm, inviting, and easily enjoyed, there's just no way that a listener could feel many other emotions than joy when its sounds are spinning.
Along with Sameer's tablas, Ross plays 12 string acoustic guitar, and the combination is incredibly beautiful. The eight tracks that comprise Upward all share a generally calm and magisterial feel. The duo sound as if they're not so much playing to impress as they are to really communicate emotional depth, one that pulls from any number of musical streams. Disaster Amnesiac has often felt as if I were privy to an eloquent, learned conversation as I've listened; indeed, my emotional landscape has been lifted upward by their duo exchange. Not to say there isn't some fiery playing: when Hammond hammers down with great slide tones, it's as if lightning were hitting the Punjab (or Oklahoma) Plain, and Gupta's statements on Being and Becoming feature so much of the diverse sound and incredible complexity that make tabla drumming somewhat daunting for this listener. Still, an overarching feel of aesthetic wisdom, one that seems to disregard overt shows of prowess, instead focusing on deeper, much more musical interaction, takes the day. These two just know, and their sounds on Upward leave no doubts about that.
Thanks for pushing me up and out of my comfort zone, Sameer and Ross. Hopefully your sounds will lift up many other listeners as well.
Posted by Mark Pino On Drums at 8:31 AM No comments: 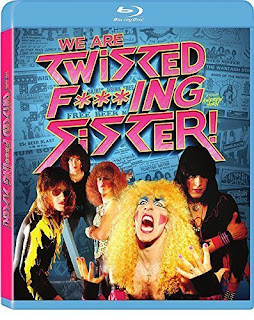 3274 shows are a lot, and, according to the initial footage of Andrew Horn's We Are Twisted F***king Sister!, that's how many that Twisted Sister played up until their big break, which happened live on the British airwaves and led to their signing to Atlantic Records.
The film gives a deeply detailed, first hand account of the group's circuitous march to Rock stardom. Disaster Amnesiac marveled at guitarist Jay Jay French's blunt recounting of all the steps that he had to take, over a decade of bar band slog, in order to achieve his dream. Along with his capacity as guitarist and song writer, he managed this band of unruly rockers for years, clearly not an easy task within the Darwinian milieu in the New York City area. With his pragmatic, getting things done at any cost vision, he struck this viewer as a more talkative Greg Ginn! Not to turn this post into an unwitting Black Flag tribute, but second Sister singer Dee Snider, with his witty eloquence, actually made Disaster Amnesiac think of Henry Rollins. Surely these two must know each other by now?
In Snider, the band clearly had another driven, take no prisoners type of guy, and the combination of the he and French seems to have solidified that fact that Twisted Sister was going to achieve their goals at any and all costs. We Are Twisted F***king Sister! additionally features compelling, almost color commentary style footage from the rest of the group, Kenny Neill, Eddie Ojeda, Mark Mendoza, and A.J. Pero (RIP) who add small details and insights to flesh out the somewhat longer clips of French and Snider.
Along with these insider views, the film smartly utilizes interviews with several members of the band's early, rabid fan base. These were the people that made occurrences such as a 22,000 person attendance for a free show in Long Island possible, along with filled-to-capacity theaters all over New York, New Jersey, and Connecticut. The fact that Twisted Sister was able to meet these kind of numbers without the support of any type of label or even real management, for years, stands not only as a testament to their hard work, but also to that of their fans' dedication. Disaster Amnesiac found this nod to them to be very classy.
As for the "from the stage" bullying that Snider et al meted out to those in the crowds that didn't share in the enthusiasm.....not so much. I guess that they did what they had to do, but, watching Snider's recounting of that dynamic, I felt a bit disgusted. Maybe they could have let their tight Street Rock have the desired effect upon potential new fans?
That criticism aside, by the later portions of We Are Twisted F***king Sister!, Disaster Amnesiac was all in, rooting for the band as they navigated their last few, still fraught with missteps, moves into the upper echelons of Rock stardom.
Bands are often about drama, belief, and overcoming. Twister Sister had all of these, in huge doses. We Are Twisted F***king Sister! is as good an inside view of the messy and tough world of band life as I can recall seeing.
Posted by Mark Pino On Drums at 9:31 AM 1 comment: