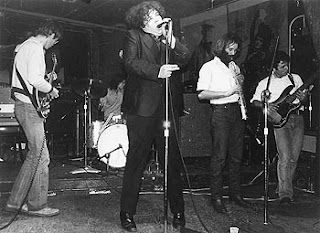 While it seems unlikely that they will be able to surpass the sheer volume of digital live releases from Fugazi, the folks at Hearpen and Pere Ubu have not been slacking in this regard, and their most recent, Manhattan, is well worth the time spent listening to.
Documenting a two-set evening from 1977 at Max's Kansas City, Manhattan shows the band with feet in two separate periods of their evolution, and standing solidly within both. On their earlier, Peter Laughner era tunes, the band sounds tight and accomplished; they clearly know tunes such as 30 Seconds Over Tokyo and Final Solution. They stretch out and play within the arrangements, showing complete mastery over them. It's pretty striking for Disaster Amnesiac to hear the Nuggets and Krautrock elements within the primal Ubu sound. I swear that I heard the verse riff from Journey to the Center of the Mind pretty clearly played at one point, and Scott Krauss busts out some serious motorik drumming at one point during Final Solution. The great thing about Pere Ubu has always been their singularity. They can digest diverse influences, throw them into their mix, and still sound completely like themselves.
Speaking of influences, the Dub, Reggae, and Industrial ones that helped shape the post-Laughner, Modern Dance iteration of the band show strongly within those tunes in the set. While not as totally baked as their earlier counterparts, songs like Nonalignment Pact and Street Waves sound confident and near-complete, and the band sounds very much engaged in working out their changes within the new, late 1970's Ubu template.
It would be somewhat challenging to list Underground Rock bands from the 1970's Punk era that skillfully fused instrumental know-how and prowess with that era's raw nerve and emotive punch. Pere Ubu most definitely qualify as having both aspects in spades. Listen to Tom Herman's incendiary solo during My Dark Ages or the tight, wiry rhythmsection stomp of Tony Maimone and Scott Krauss for ample proof of that assertion.
Allen Ravenstine's Avant Garde coloration of the the tunes with reeds and synths, and David Thomas's one-of-a-kind vocals do much to make Pere Ubu's sound unique. Thomas's sly, understated humor during between-song banter and his refusal to encourage throwing opening act Dorian under the bus (at the insistence of some yutz in the crowd) are particularly compelling for this listener. Thomas can have such a larger than life persona, and it's nice to hear him as a mere mortal.
Manhattan is a fine document of one of Rock's strongest bands, during one of many periodic peaks. Disaster Amnesiac hopes that Hearpen will continue to unearth and unleash more tapes from this, and other, Ubu eras.
Posted by Mark Pino On Drums at 2:48 PM No comments: