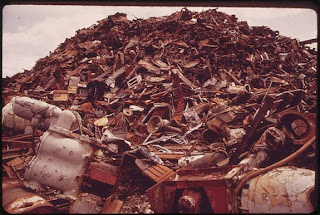 As usual, Disaster Amnesiac has let far too much time go past without an edition of the Up Half-Known Roads series. It's not as though I've been lazy, far from it. I was just marveling at the fact that the month of May has already for the most part slipped by. Good lord, how short is this mortal coil? Enough kvetching, though, and allow me to introduce this installment's theme: solo metallic/Post-Industrial percussion! Of course by now, just about all of America must be familiar with the concept, by way of, say, the Blue Man Group. This installment goes way beyond the likes of them, hopefully, dipping into the darkened caverns of Post-Industrial U.S.A. and pulling up some fine examples of the genre that whatever readership I currently have the pleasure of serving may not be on to. If you're already familiar with these artists, kudos. If not, hang out a bit for some clanging! 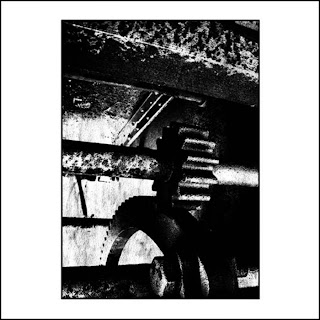 Hal Hutchinson-Wreckage Installations & Metalworks; Crucial Blaze, 2014
It was an initial hearing of this CD, several months back, that first sparked the idea for this post. At the end of his detailed liner notes, Hal Hutchinson describes the sound on Wreckage Installations as being examples of "true Industrial sound", and Disaster Amnesiac is very much inclined to agree. Hal took field recordings of scrap metal, all clanging and banging together, then mixed them together with looping processes. The resulting seven pieces (three somewhat longer, four shorter) provide all kinds of compelling sounds for the attentive listener. I've heard the voices of ghosts, strange familiar/unfamiliar melodies, rushing rivers, all manner of tones within these carefully crafted matrices. One thought that keeps coming back is the way in which Hutchinson's music on this disc shows layers of voices, much like those of any symphonic movement or attentively written song; there are low baritones, tenor and alto voices, and high soprano sounds. Wreckage Installations and Metalworks proves to be a very enjoyable listen, very much due to the obvious care with which it has been formed. The physical edition, assembled with equally great care and featuring really cool art, seems to still be available at the Crucial Blast website, but it's limited. Cop one and then let it color your mind with Rust Belt Rainbows of sound. 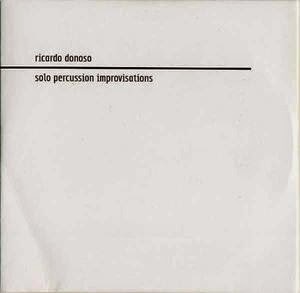 Ricardo Donoso-Solo Percussion Improvisations; self released, no date given
As opposed to the sheer bombast of the Hutchinson disc, Ricardo Donoso's Solo Percussion Improvisations is tons more quiet and subdued. Disaster Amnesiac figures that this is due in large part to the methods used in order to make these pieces. As the title says, they're improvisations. The tracks have that kind of questing feel that features on so many improvised pieces; it's as if the listener can feel along with Donoso as he explores various surfaces for the sounds that lay hidden within them. These sounds include high pitched scrapes from cymbals that float somewhat menacingly in the auditory spectrum, bubbly rubbing ones (from plastic drum heads?), long bowed tones, chains rattled and whirled on surfaces, and complex drumming patterns on actual drums. One important aspect of improvisation in music seems to be that of the player or players showing their inner thoughts and insights, and what Disaster Amnesiac loves about Solo Percussion Improvisations is the way in which Donoso, through pretty simplified means, does just this. One can feel oneself in the room with him as he, somewhat quietly, explores those innermost recesses of the Clang. 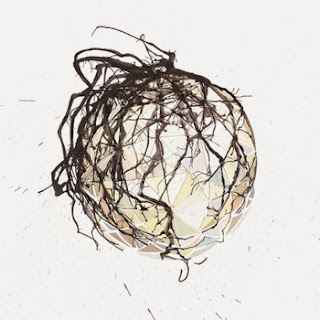 Ben Bennett-Spoilage; Experimedia, 2012
Last up for this Clanging Edition we find Ben Bennett's great Spoilage LP, on which the very talented percussionist coaxes any and all manner of sound from a long, meticulously detailed list for instruments. Much like the Donoso disc, Spoilage's performances sound as if they are real-time improvisations. Bennett does a really fine job of layering their various sounds as he works. Disaster Amnesiac has had the pleasure of seeing him do his thing live, and can attest to the veracity of this. He essentially utilizes a pile of sound making devices, and whirling them around on a surface, creates these maelstroms of sound. This is not to say that he's not a gifted technician: I've marveled at his sticking control, as it is really something to behold. On Spoilage, there are tracks on which he plays frame drums that prove this point. Bennett also uses a saxophone mouthpiece fitted with a drumhead-reed to accompany his drumming, adding even more layers of listening interest for the listener. There are also whirling, rubbing, and scraping sounds to delight at. SF Bay Area artist/musician/dancer/shaman Bob Marsh has described Ben Bennett as being something like one of America's foremost practitioners of genuine Butoh, and Disaster Amnesiac is inclined to agree with him. He uses dramatic silences, long pauses, in a way that is congruous with that form's aesthetics. There are long stretches of said silences embedded with parts of Spoilage which add to the dramatic tension feeling of their clang. This LP also has incredibly funny and sardonic track titles, my favorite being "I'll Call You When I Get Creamed By a Motorist". Ben, call me when your next release happens!

Believe it or not, Disaster Amnesiac does get intellectually involved in these posts. Hell, I probably get more food for thought than anyone else does with them! As I've worked on this one, it has occurred to me that there must be hundreds, if not thousands of individuals in the world who are working on musical projects and sounds similar to these. I often feel that the Noise genre and its many offshoots are a new form of Folk music in that way. If you're seeking out a few new clanging sounds from solo percussionists,  or perhaps an entry point into the genre, you might consider starting with one of the above. Tons of compelling sounds comin' from them, if you're willing to listen.

Posted by Mark Pino On Drums at 3:43 PM No comments:

The Other One: The Long Strange Trip of Bob Weir; Netflix Originals, 2015 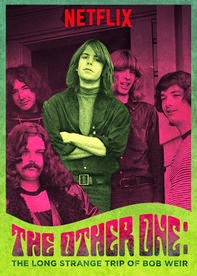 Mrs. Amnesiac and myself just finished watching this brand new film about the man who is most likely the most recorded musical artist of all time, and Disaster Amnesiac has to say that it's pretty damn good.
The person that emerges from this portrait is one that is eloquent, thoughtful, and bluntly honest. I find myself wishing that so many other Pop Culture Icon types shared these traits with Mr. Weir.
The Other One is filled with great archival footage of the Grateful Dead, naturally, and I'd be willing to bet that most Dead Heads, along with more casual fans, will thrill at its visual treats. There are also beautiful shots of rural Marin County and San Francisco, which, when paired with Grateful Dead music, show how reflective of the physical aspects of the San Francisco Bay Area their music really could be.
Additionally, there's a really heart wrenching interview with Trixie Garcia, in which the weight of her dad's life and its tortured ending really cuts through. Seriously, you'll be moved. Thankfully, Weir comes in to save the day with compassionate insight into the character of Jerry, and his matter of fact musings go far to assuage the raw pain that comes through Trixie's breakdown.
Obviously there will be many more blog posts, tweets, and Facebook statements about The Other One: The Long Strange Trip of Bob Weir, but I just had to get a quick one in while the impressions are still vivid.

Posted by Mark Pino On Drums at 6:58 PM No comments: 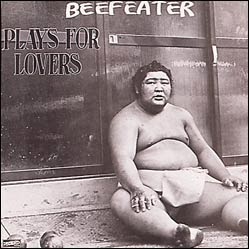