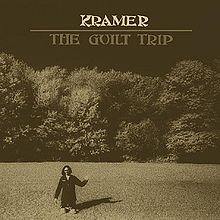 It started with a Lida Husik CD. Disaster Amnesiac was rooting around for some tunes to listen to during a long day of driving, and her great Bozo disc made the cut. As it played, I started marveling at Kramer's engineering, and then began pondering Kramer's musical output, until, at the end of the day, I was digging into his powerful 1991 solo record, The Guilt Trip.

As Disaster Amnesiac remembers it, Kramer and Shimmy Disc were at the vanguard of the Psychedelic Music movement of the later 1980's and early 90's. While so many music scenes were solidifying their sounds into pretty easily pinpointed aesthetics, Kramer and his crew were conducing guitar-based experiments into divers manner of approaches. I recall marveling at the hazy, stoned vibes from Bongwater, and the somewhat sharper focus of the Psych Pop of B.A.L.L. Then there's the dreamy ouvre of Husik. And on and on. I recall also being entranced by their soft, grainy, sepia visual aesthetics. These, and, probably with much hindsight for this listener, the ways that Kramer engineered these groups, all combined for a very unique identity emanating from the label and its foreman. An identity that was shrouded in, for me, a very poetic sense of mystery and "differance".

Disaster Amnesiac may have heard about The Guilt Trip when it was released, but I haven't heard it until this recent time spent with it. A shame, really, but most definitely a better late than never scenario. There is just so much music here!

Let's start off with the all-important lyrical arc to The Guilt Trip. It doesn't take a brain surgeon to figure out that the story of a really horrible break up is told on the recording. That, and what seems to be a subtext that is Moby Dick related. As regards the former, Kramer does an incredible job of putting this human experience to words. It's all there: heart rending pain and agony, absurd personal revelations, surreal insights, violent thoughts, feelings of abandonment, sudden unexpected joy; these, and probably a lot more that Disaster Amnesiac is missing. His treatment of the topic is just spot on. If you've not had this experience, you're lucky. If you have, there's a ton of relatable lines on The Guilt Trip. As for the latter, I can't quite seem to place anything for certain, but there are quotes about whales, and titles that have references to them, and stories about them, so.........

Then there's the music. The band, made up of Kramer on bass, Alan Licht and/or Samm Bennett on drums, and Randolph A. Hudson III on guitar, puts down a great performance of Rock trio dynamics. Their playing together is so tight but loose at the same time, and each one of them sounds so adept with their instrument, yet so non-schooled at the same time. They freak out together on the instrumental passages, play great simple parts during the lyric-focused songs, and just rock out in such a great, organic manner throughout. All this, and they never sound as if they're aping any other groups. One can hear myriad influences: Psych Pop, Psych Rock, Blues, Country & Western, but that said, these very adept players take them and make their own group sound with them. It's quite great to hear, and Disaster Amnesiac wishes that they'd have made more recordings. Kramer seasons all of these moves with intriguing found sound snippets at times, giving voice to several seemingly important players in the drama of The Guilt Trip.

All told, the music, lyrics, and overall package of this recording are constantly dynamic and immanently listenable. Disaster Amnesiac is really happy to have finally dug in to The Guilt Trip. I hope that Kramer has recovered from that amour fau!

Post Script: for additional reading about The Guilt Trip, I highly recommend Lexicon Devil's great blog post about it from 2008.

Posted by Mark Pino On Drums at 7:51 PM No comments: 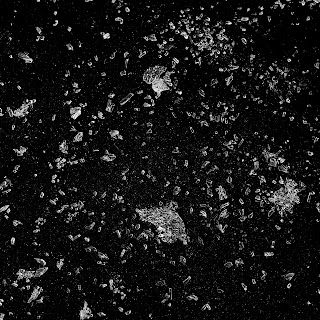 David Winogrond has always been an important figure in the Disaster Amnesiac experience. I first interviewed him several years back, and since that time he's kept me abreast of his ongoing musical pursuits, especially with Youth Chairs, his sweet Pop Rock group.

A month or so back, David sent me a copy of their most recent effort, the song A Million Pieces of Glass. With its Laurel Canyon chorus, Mod Beat ending section, and poignant lyrics, it should be a radio hit single. It's that catchy, and all the more so for its intelligence and craft. Disaster Amnesiac wishes that that would be so.

David told me about the method of Glass's production. Not surprisingly, it was put together by the members of Youth Chairs at a distance. This method obviously is not new, but, seeing as that it was for most of this group, Disaster Amnesiac was pretty curious about how their experience in doing so went. Questions were emailed to David, who in turn distributed them to his band mates. Answers were forthcoming. They are here now. Most of all, I love their witty take on the experience, and respect their flexibility within a new group learning curve.

Q: I'm assuming that Youth Chairs have never produced music in the way that A Million Pieces Of Glass was produced. How did the decision to do so come about?

David: The pandemic. We wanted to continue recording new songs but rehearsal & recording studios were closed. Basic song demos in the past were also done like this, but with basic drum machine parts just to help establish a feel and I'd take it from there. But in this case, we decided to turn this into a more elaborate demo. It got more interesting from there, so we decided to release it. In early versions, I was playing my knees with my hands. That wasn't quite cutting it, so I bought some midi drum pads and learned how to use Garageband.

Kim: In the past I’d sung musical ideas into my iPhone so that seemed like an option for recording for me given that the rehearsal studio was closed. Necessity is the mother of….Zappa?

Q:  Once the decision was made, what were the logistics like? How did all the parts fall into place?

Jon:  Did you see the cover photo?

Q: Did any funny occurrences take place during the production of A Million Pieces of Glass?