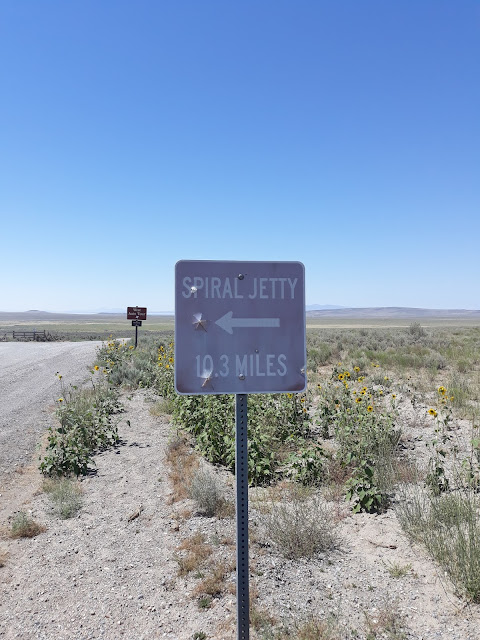 Well, needless to say that 2020 has presented a paucity of opportunities for Disaster Amnesiac to get out and experience anything resembling culture. Surely it's been the same for everyone else, so I won't waste a reader's time parsing the whys and wherefores.
Simply put, I got the hell out of my house for a while! A couple of weeks spent cruising around the North West afforded a chance to get out to Rozel Point on the Great Salt Lake to see Robert Smithson's masterful Spiral Jetty.
Disaster Amnesiac had been wanting to see this earthwork, has been fascinated by it, since about 1997 or so, when I read of it during a self-taught art class, assigned by a VERY talented and deep woman by the name of Heidi.
Amidst all of the chaos, uncertainty, bitterness, and disappointment raging through my county in 2020, it really did feel like a miracle to have actually gotten there.
The drive in to see the Jetty must be included, even if briefly, in the description. I'm definitely not the first person to say "you have to work to get to it", and this is certainly true. Perhaps the road has gotten a bit more easily navigated since Robert Smithson first plowed the Spiral Jetty into existence in 1970, but, still, it's bumpy, hot, and dusty. Our host from the night before driving out to it admonished us to grab extra water for our trip, and it was indeed needed. One certainly would not want their vehicle breaking down out there, as it's a long way out from the nearest communities.
As for the Spiral Jetty itself, it did not let Disaster Amnesiac down. As one drives around the last bend of Spiral Jetty Rd. and into the small parking area, it appears to the viewer. Right away, it becomes apparent just how well-integrated into its environment the Jetty is. Although it asserts itself in a powerful way, the Spiral does nothing to overpower the elements around it. The water of the lake, the mountains in the distance, the salt bed upon which it sits, all of them frame it as it spirals gracefully among them. I marveled at the earthwork's seeming delicacy within the rough terrain of it surroundings.
The Spiral Jetty is characterized by constant change. Disaster Amnesiac has looked at photos of its initial installation, and noticed how the water of the Great Salt Lake was pretty high around the basalt rocks which form its frame. Articles from the structure's reemergence in 2004 show it as having been encrusted with salt and surrounded by red brine. The Spiral Jetty that I got to see featured the basalt having gone back to black and sitting within a mostly dry bed of salt. I pondered the mystical, symbolic implications of such changes as I walked the structure, picking my way along the bumpy, uneven path of its raised earth. Surely, Robert Smithson, by all accounts a very deep thinker, would have wanted the viewers/participants of his masterpiece to do so?
After the process of walking the Jetty was completed, Disaster Amnesiac spent some time taking in side views of it. As my feet crunched upon the "icy" salt bed, I again appreciated the way in which its form adds to the views of its surroundings, while never dominating them. From any angle, the Spiral Jetty just fits perfectly within the space in which it was placed.
Finally, I scrabbled up the the hill of Rozel Point to take my last glimpses at the Jetty. From that vantage, the view was perfect and awesome. As I stood back and beheld Smithson's masterpiece in all of its ever changing, ever static glory, Disaster Amnesiac spent several minutes pondering the fixed nature of it. It would take a huge amount of effort to even begin to remove the Spiral Jetty. It's going to be there for a LONG time. If Smithson's intention was to leave a permanent mark upon the the physical world, I'd say that he succeeded. The fact that he did so with such a sublimely realized piece as the Spiral Jetty is a testament to his vision. The mind boggles at the thought of what his process for this piece must have entailed.
2020 has proven to be a year of pretty low valleys for Disaster Amnesiac, as I'm sure it's been for millions of others. At the very least, I will be grateful that in this year of apocalyptic turmoil, I finally got my long awaited chance to see and interact with the Spiral Jetty. While culture remains cancelled in my country, I'll be happy reminiscing about my experience at Rozel Point, basking in the glory of Robert Smithson's vision.
Below: some views of the Spiral Jetty from Rozel Point 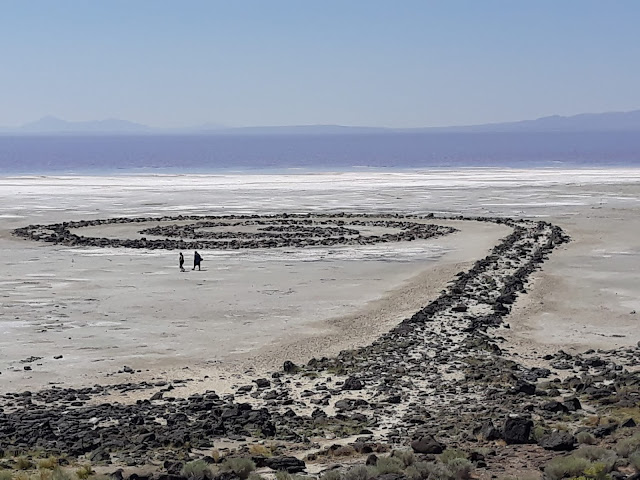 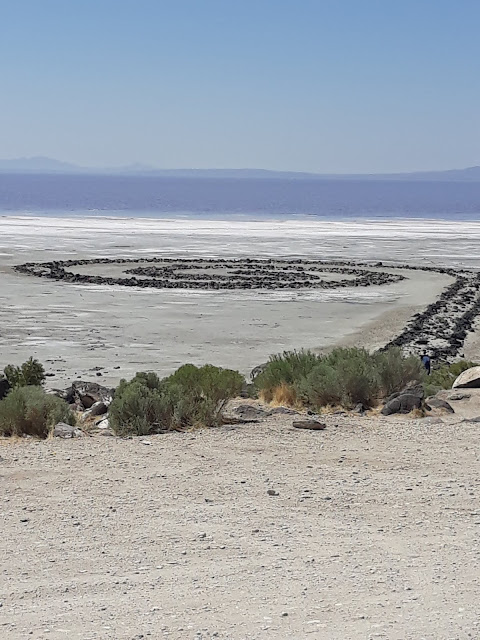 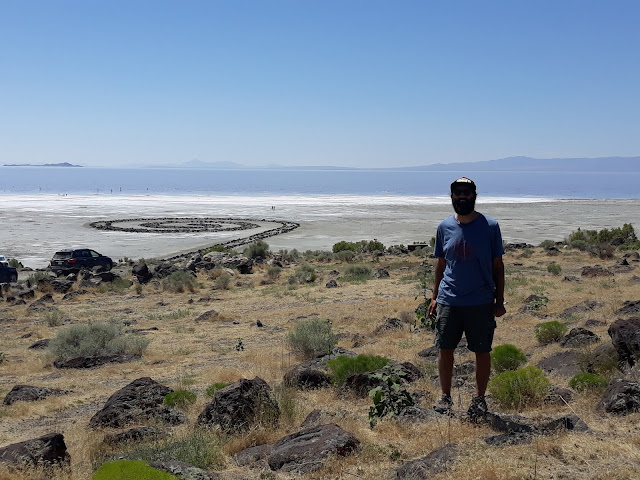 Above: Disaster Amnesiac, happy to be at the Spiral Jetty!
Posted by Mark Pino On Drums at 3:11 PM No comments: