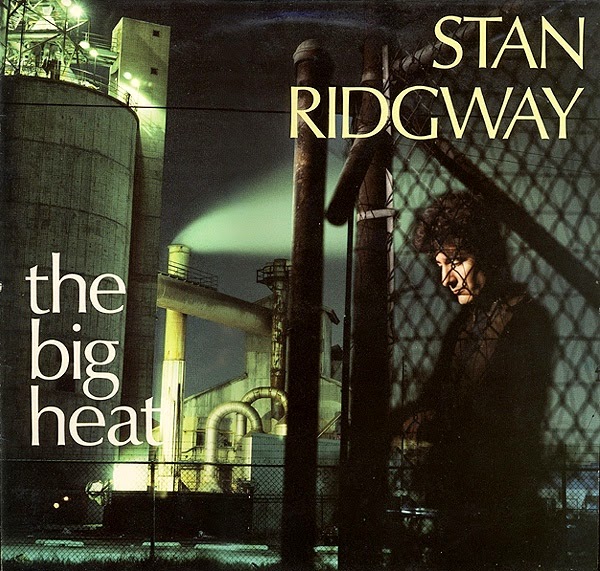 A few days back, Disaster Amnesiac finally got around to watching Thom Andersen's Los Angeles Plays Itself, and was completely blown away. Seriously, it's the only three hour film aside from Drawing Restraint 9 that I've felt sad to have finished and could have watched for another hour, at least. Andersen's eloquent pastiche of films from all eras of the 20th Century, and his cuttingly insightful narrative voice over makes for a tremendously satisfying film.
Upon completion of this surely initial viewing, Disaster Amnesiac promptly got in my car and drove to Goodwill, absolutely convinced that I'd find some kind of musical analogue for the film magic that had just been witnessed, and, sure enough, Stan Ridgway's 1986 LP The Big Heat leaped out from behind the usual Hugo Winterthaler and Olivia Newton John fare.
Right off the bat, I realized that the industrial scene that Ridgway poses in front of on the cover could very well have been shown at some point in Plays Itself. That, and its murky greenish light, so evocative of the Los Angeles night-time combo of haze, sea air, and halogen lamps, not to mention Ridgway's long time status as a City of Angels raconteur, and I knew that the desired crate digging magic had been achieved.
Naturally, this synchronicity would have been moot, should The Big Heat turn out to be an unlikable LP for this listener; thankfully, that's pretty far from the case.  Disaster Amnesiac has long been a fan of Wall of Voodoo, not only for their Country/Western/Punk Rock/Industrial/Dada musical production, but just as equally for Ridgway's lyrical moves. This being a Ridgway solo spotlight, it stands to reason that those moves would take center stage. As with Wall of Voodoo, his lyrics tell tales reflective of the often surreal, sometimes seedy, and endlessly fascinating undersides of cultural production and the American life that seems both supportive and reflective of it. Stan makes common cause with all sorts of typically American and specifically Los Angeles/Hollywood characters: private dicks in The Big Heat, speculation engineers in Pile Driver, traveling salesmen in Salesman, and an almost Paul Bunyan-sized mythological hero in Camouflage. His wry, off hand delivery of these culturally erudite texts will be familiar to any Wall of Voodoo fan, and Disaster Amnesiac suspects that they'll be equally compelling. Stan smartly retains his signature delivery that made Mexican Radio and Lost Weekend so successful.
The real difference with his former band comes within the musical/instrumental approaches on the LP. Ridgway seems to have not necessarily moved away from the Wall of Voodoo sound, but supplemented it, expanded it with more purely Pop touches. The Big Heat definitely has a brighter sheen than Wall of Voodoo's work; at times the thing screams out "1980's!!!!", but for the most part it holds up as a tight, timeless, musical Pop statement. One just has to admire the song craft aspects shown, along with the fine playing from the author and his cast of players; Disaster Amnesiac heroes KK Barrett and Mike Watt even make appearances on the 1960's stomp of Drive, She Said and the showbiz rant Can't Stop the Show, respectively. I wonder if the former is KK's last recorded drumming performance? These and other players give the The Big Heat an assured, professional vibe, along with the eclecticism that comes from a rotating cast of characters. Stan seems to have made some very astute choices as to which cast members played what and where they did that playing on the tunes.
At the end of the LP, he out-Voodoos Wall of Voodoo, with Camouflage sounding as if it was a Call of the West outtake (although Disaster Amnesiac is pretty sure that there were no Marines in Vietnam in 1965, at least any with boots on the ground). This small bit of historical inaccuracy brings me back to Los Angeles Plays Itself and its premise: the entertainment industry will never reflect reality in a completely "real" way. Reality is simply fodder for product/production, a fact that we're all well-appraised of by now. Andersen gave praise to those from Hollywood that at least tried to show some semblance of truth within their film offerings. Disaster Amnesiac figures Stan Ridgway deserves similar praise for The Big Heat, as within its Pop tableaux are contained many fine sounds and stories that have held up well over time; their lyrical and musical craftsmanship could serve as models to those that would throw their hat into the entertainment industry rings.