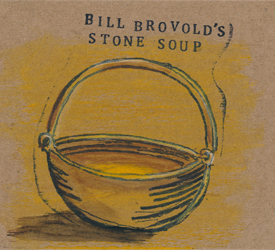 Along with some really fine discs of new music, a recent package from Public Eyesore contained a promo sheet announcing the label's 20th anniversary. Great job Bryan! The music that you've been documenting for the last two decades is always so compelling and groovy. Kudos!
Disaster Amnesiac is breaking with habit by starting off the reviews out of sequence, having delved immediately into Bill Brovold's Stone Soup's Michael Goldberg Variations, a disc of music that is generally quite introspective and quiet. Bill Brovold, per the liner note, utilized the input of artists Michael Goldberg in creating a piece of music that is Minimalist without being meandering or even repetitive. A four or five note motif is played on an acoustic guitar, around and along and beside which various guests are heard adding their own musical additions. Guitarist Mark Ormerod goes first, finger picking some lovely guitar lines, notable for their at times fret buzzed tension. What sounds like an amp being hit for subtle feedback and viola-like theremin sounds from Scott Burland come next. Disaster Amnesiac is fascinated by the very unique sounds Burland coaxes from his theremin; the instrument really is developing by leaps and bounds, and Scott pretty clearly is on the forefront of that. Bill's former band leader Rhys Chatham appears next with cool flute sounds wordless vocalizations that evoke very primal feelings as they wrap around Brovold's continuing guitar float. Really sweet e-bow riffs on electric guitar, too. Things seem to get back to the aesthetics of the first track as Fred Lonberg-Holm uses cello with implements in order to get shorter percussive attacks followed by long drone bow  sounds. This track feels like it go on for a great deal longer, but, in keeping with the overall mission of Variations, it fades into Leonardo ProtoPeople's synth pops and crackles as they fuzz and distort, pointillist additions to the guitar that has transformed into a sumptuous current. Kieth Moline seems to have added both audio processing and guitar to his version of the piece: the repeated guitar riff rings more, colored by buzzing strings and hollow echoes. The track feels like a natural half way point as it up the energy with its other worldly dynamic flashes.
Stone Soup settles back down into an easier boil with Frank Schultz's lap steel bends and turns. The instrument surely brings out a bit more of rural, Western U.S. feel as its Schultz's lines emerge over and atop the motif, cooling it off from its previous interactions and setting up the second half of this disc. Guitarist Nick Didkovsky treats his sounds with great psychedelic tape delay flashes that circle somewhat beneath the Goldberg Variations riff. These allow the buzzing of its strings to be highlighted. It's as if Nick wanted to frame it, rather than add, and even as his playing gathers intensity, it remains settled in a "support" role. Quite an astute aesthetic move. Tracks 9 and 10 segue right into each other, with the former featuring Toy Pop artist Frank Pahl, who adds chiming percussive hits from what sounds like a plastic toy piano. The latter has Karen Haglof spinning out sweet six string Psychedelic, and Disaster Amnesiac is moved to hear echoes of Golden Gate Park 1968. NEVER a bad feeling as far as I'm concerned! This track rolls like sublime fog careening down into the Western Addition. The paired guitar sounds of Beth Wilusz and Erik Gustafson flutter ghostly on Michael Goldberg Variations' penultimate track, ascending and descending subtly around the now transformed central riff, which takes center stage and holds it right on through to disc's end, a second feature for Mark Ormerod. This short piece has small, two note riff, somewhat higher notes giving a last counterpoint. A quick fade, and its work is done.
Disaster Amnesiac's initial experience with Bill Brovold's Stone Soup had me listening to it on a San Pablo Bay cold Saturday, ducking in and out of its sonics as I watched marine layer mixing with ash from horrible fires a couple of hundred miles north of my residence. Michael Goldberg Variations provided the perfect soundtrack for this bittersweet experience, with its pensive modes. It features music that most certainly could be utilized either as good background or for more foreground intensive listening. Either way, Brovold and Co. have clearly done their job. Enclosed within a lovely hand printed and colored cover, this disc just exudes effort and integrity. No surprise, seeing as that it's out on Public Eyesore! 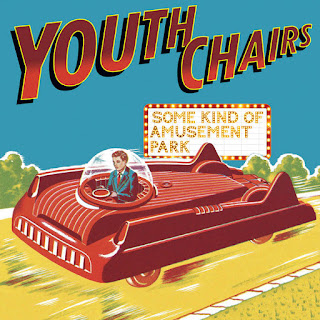 It's always a pleasure for Disaster Amnesiac to hear from David Winogrond. I've been in contact with this great, under appreciated drummer for about ten years now, and when he gets in touch with news of his current musical moves, I feel very happy just knowing that he's soldiering on. A couple of months back, David let me know that Youth Chairs would be releasing new material, and despite a pretty terrible lag on my part in posting, I've known that it would get the Disaster Amnesiac treatment. Hopefully that's a good thing for them!
Some Kind Of Amusement Park begins with the stomping Hot Rod To Nowhere, which features Gabriele Morgan on vocals. It's interesting to note that Youth Chairs utilize two vocalists on this release, Gabriele and Kim Dart Hurwitz, both of whom were in the band's initial early 1980's runs. Really cool to see this type of cooperative compromise! Gabriele's voice is a bit more gritty, and it works perfectly for this track, with its early 1960's U.K. Country Blues feel. David's drumming locks in perfectly with Larry Jacobson's slashing guitar chords and John Richey's understated bass playing. When the band band launches quickly into a post-bridge ascending unison riff it's a thing of beauty! Hot Rod really hooked this listener's attention.
Youth Chairs bring the sound a bit closer to their Los Angeles home on When Amy Says. The tune has that post-Punk energy that fueled many bands in Southern California, with nodding hints towards Bakersfield and maybe Ventura and Pedro aesthetics. Guitars jangle a bit more, and Kim's vocals feature a bit more naivete perhaps. David's swishing cymbal sounds and crisp fills drive this great piece of Pop Rock energy.
Gabriele's more deeply dramatic voice starts off You Made Me Believe. Disaster Amnesiac again finds it fascinating to compare hers with Kim's. They're both great, mind you. Just very fun to dwell on the differences as these songs roll by. The former has a voice perfect for the sentiments of this damn fine love song. Larry strums some effective acoustic guitar and Lisa Haley helps out with lovely viola, while Richey and Winogrond keep things simple and clear in the rhythm section. A very pretty, uplifting, optimistic track.
Youth Chairs bring the energy back up for the spiky Kim feature, Next Best Thing, which fuses most of the stated influences into a very catchy chant about misunderstanding within love relations. Any song that features the line "...the weed is on your nightstand/and the rest is in your head..." is fine with Disaster Amnesiac, that's for sure. Such a damn catchy chorus and bridge, to boot.
Gabriele takes the mic again for the world weary sentiments of Your Perfect World. This tune cannily fuses sunny Dream Pop keyboards from John Kaysing with righteously dissing critiques of some shiny scene. Was this written during Youth Chairs' initial forays? Surely these types of insights are perennially available to the observant person. The approaching of wrapping this message into such a lovely Pop sound is real neat.
Next up, we have the deceptive Don't Make Me Your World, and it is so because while it's Gabriele singing, she sounds a lot like Kim. Or is that vice versa? This track has a loping, almost Ska feel at times, greased by more cool keys from Kaysing and David's tight fills and swift hi hat sticking patterns. Disaster Amnesiac keeps thinking "the Who" during this song's bridge, and envisions a strange carnival during its brief non-sung musical interlude.
Some Kind Of Amusement Park's penultimate track, Paper, kicks in with more fine jangle from Larry's guitar before Kim's return to the mic is pushed with power chord authority. Tight arrangement keeps things moving on this track, leading to more of that great Los Angeles (not Hollywood, mind you) cymbal bell bar stomp action. That sweet jangle gets reinserted there for more Youth Chairs ear candy.
The album ends with a tom tom lead ode to cross country travel, New York Gray, in which Kim utilizes a bit more dramatic leanings to describe a rather ambiguous affair that takes place in the Big Apple. Kaysing's keyboard solo has Disaster Amnesiac thinking about Doug Yule's great playing on that third Velvets LP. Gray most definitely has that bitter sweet feel, and having recently been to NYC, I'm relating. Life's full joy and sadness, and a track such as this adeptly illumines this fact.
Full of Pop vim and Punk Rock vigor, Some Kind Of Amusement Park continues the odyssey of Youth Chairs in a compellingly listenable way. As stated, Disaster Amnesiac always relishes hearing from David Winogrond. Sounds this catchy and energetic just sweeten that deal even more. Nicely done, Youth Chairs!