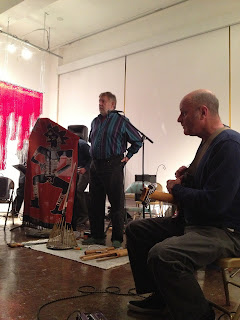 On the way from car to venue, Disaster Amnesiac and my pal Andrew marveled at the new-ish yuppie looking lofts that are going on and around 6th St. in SF. Yes, that is finally happening. Where will the area's perennial down and out go, once that particular shift has been completed?
Thankfully, the Luggage Store remains ensconced on Market! 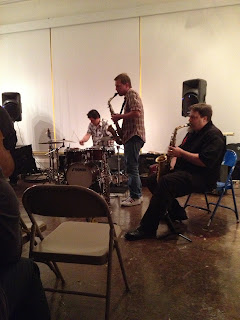 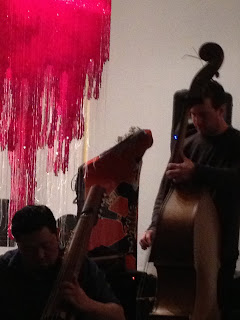 Above: Sung Kim and David Dupuis; strings oscillate
Below: Timothy Orr bows the drone down 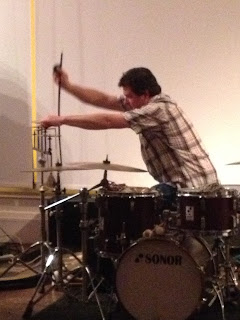 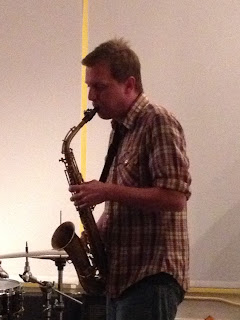 Above: Brian Pedersen trills
Below: Key West in flight 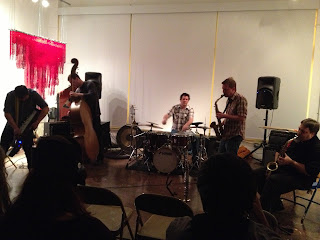 After a brief intermission, musical instrument innovator Richard Waters ushered in his group. The group delved quickly into the psychoid realms, coaxing long, shimmery tones out of Waterphones, strings, metallophones, saws, etc. Waters focuses on music that is quietly intense; the Luggage Store's space seemed almost too big. Disaster Amnesiac was wishing we would have been sitting with them in a living room! 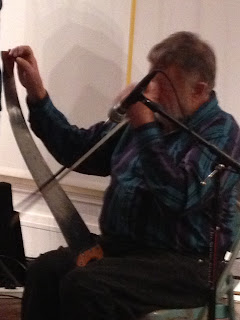 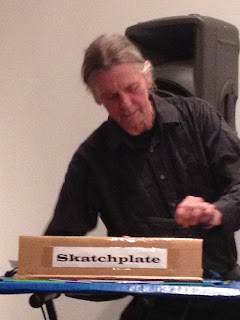 After a few searching numbers, the Waters invited special guest violinist Tom up ( I did not get his last name). Tom's presence seemed to give the group a rhythmic focus, and their jams got a bit more visceral, almost rocking at times. Waters seemed to enjoy the energy that Tom brought with him. 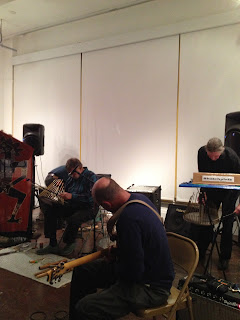 Above: Mike Knowlton digs in on guitar
Below: Gary Knowlton behind the veil, David Michalak on lap steel 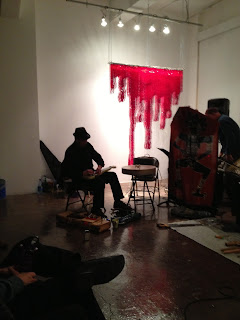 Below: Tom and his groovy violin 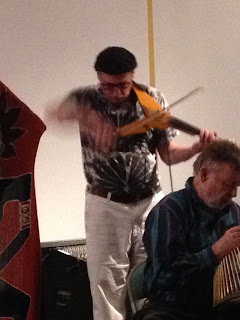 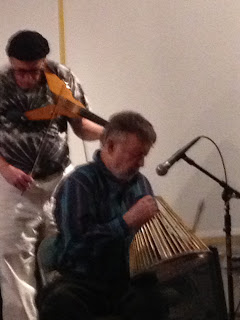 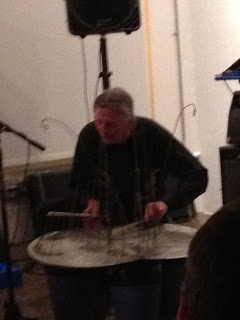 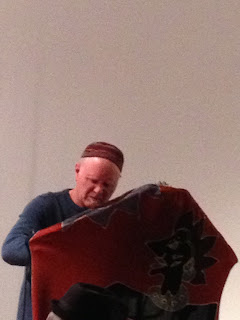 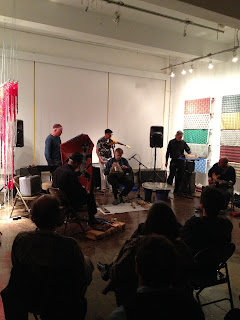 Above: Richard Waters, his friends, their sounds

Back out on 6th St., after the show, Disaster Amnesiac and his pals watched as a fiery Lunar New Years lamp was lit and floated gracefully up into the clear night air of February.
Posted by Mark Pino On Drums at 7:04 AM No comments: 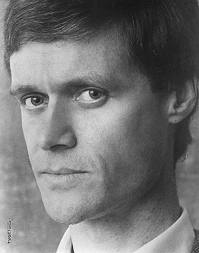 Kim Fowley dedicated this first volume of his Trilogy to his never-found Frankenstein's Bride, but Disaster Amnesiac is here to say that self-described Lord of Garbage sure found all manner of other folks with whom to work with, on, around and over.
Lord of Garbage intersperses Fowley's reflective poetry with a sharp recounting of his life from 1939-1969. The poems are great, rhyming, impressionistic vignettes that color his biographical descriptions of time spent being rejected by Hollywood B-list parents, kicking around tough foster home situations, battling not one but two bouts with polio, missing Rock-n-Roll's initial white-hot flare up due to military conscription, and then diving headlong into a self-reliant modus operandi as a music industry mover. Any reader that does not come away with at least an understanding (Fowley probably wound not want sympathy, anyway) of what makes his give no quarter/take no prisoners/fuck you-pay me perspective tick should be advised to turn back to page one and read the whole damn thing again.
Along the way we meet the likes of Joe Meek, Sky Saxon, Steppenwolf, Mark Lindsay, Sandy Nelson,  Ambrose Slade, and Jimi Hendrix, just to name a few of the artists/collaborators that Kim came into contact with during his first decade in music industry hustle action. He gives witty, honest assessments of them, along with all of the other producers, A/R people, actors, actresses, saints and bozos that populate his crazed Rock-n-Roll world.
Disaster Amnesiac enjoyed reading volume 1 immensely, and is looking forward very much to the two subsequent volumes, already in the can. Pun intended.
Posted by Mark Pino On Drums at 10:37 PM No comments: 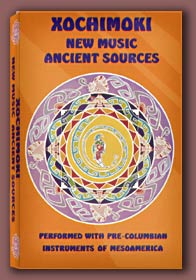 The projected Mayan Apocalypse of 2012 came and went without much fanfare (at least in this dimension of the Omniverse), but thankfully, early in this new Baktun, Mrs. Amnesiac scored this cassette at local garage sale, dutifully bringing it home to her record junkie hubby. New Music Ancient Sources takes the listener into the aural jungles that dwell within the minds of Xochimoki's Mazatl Galindo and Jim Berenholtz. The duo primarily use pre-Columbian flutes, teponaztli drums, shakers and rattles, along with ritualistic singing and chanting to conjure up paeans to the temples and topographies of ancient Aztlan. This being New Music, they do allow the occasional guitar into the mix; the one song utilizing said stringed instrument is heavy in a Mu sort of way! Judging from the liner notes (presented both in English and Espanol), the sung language is Nahuatl, but it reminds Disaster Amnesiac of Portuguese. The duo make good use of layering techniques to craft celestial Mayan chorus at times, reminiscent to this listener of the best Popul Vuh jams. The drumming and rhythm-heavy sound of most of the tunes on New Music give it a pulsing and moving feel, making it transcend the New Age genre that I suspect most folks would file it into. These recordings would sound right at home at a tiki bar or at Werner Herzog's pad, let alone that of a white robed yogi's. I crave a supergroup made up of Xochimoki and Elizabeth Waldo.
Posted by Mark Pino On Drums at 9:21 AM 2 comments: 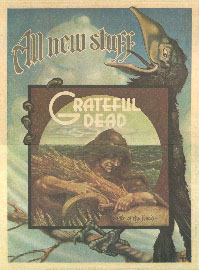 Year two of the Dave's Picks era has commenced, and Disaster Amnesiac can absolutely see why this smokin' recording from UCLA in 1973, legendary among Deadheads and Dead fans, starts off 2013's offerings from Lemiuex.
In the initial PR announcement for this recording, Dave described the concert's clear highlight: a massive, monster jam of Playing in the Band>Uncle John's Band>Morning Dew>Uncle John's Band>Playing in the Band, and, having listened to its over forty blissful minutes several times, it's clear that this suite is something special, the band ranging from mode to mode, by turns moved by and moving with Jerry Garcia's lysergic six string explorations. Disaster Amnesiac recalls a quote from Jerry in which he stated that he desired to bring a level of respect to Rock-n-Roll akin to that afforded to the likes of John Coltrane. There's a ton of that same kind of exploratory energy that 'trane brought to his live dates, here on the 11/17 show, much of which is generated during the extend Playing suite. Garcia plays spidery lines, sweet strums, fast banjo licks, and emotional screams. His performance here is a clinic in Psychedelic guitar playing, a career high point, no question.
First set Jer-tune Here Comes Sunshine is almost said monster jam's equal, as far Dead high water marks go. We're talking the second song here, and Garcia is already primed, taking his mates on a twelve minute bliss ride, the tune's beautiful chords leading into minutes of loose jamming. In the Garcia parlance, the golden yummies come out with the quickness.
As usual, I'd opine that the ballads meant a lot to Jerry, maybe more than the jamming, even, and the versions of Row Jimmy and Stella Blue are both standout, sparkling renditions, played with sensitivity and plenty of space.
Bob Weir seems to have wanted to veer away from his Jazz Fusion side at this particular show, instead going with his cowboy repertoire. They're all here: Me and My Uncle, El Paso, Mexicali Blues. Disaster Amnesiac sometimes skips ahead during these songs, but damned if even they are tight and succinct, moving along at brisk clips, going long enough to generate heat from the Dead but not lingering long enough to go complete cornball. I still can't say it enough: Bob Weir's playing is Garcia's equal when it comes to idiosyncratic uniqueness. When the band stretches, Weir's guitar sound, while not as overtly flashy and shimmering as his brother Jerry's, proves just as compelling a listen.
When preparing for this post, and listening to Bill Kreutzmann's drumming over the course of this release's 3 discs, Disaster Amnesiac considered giving it top billing, or perhaps only dealing with it and leaving all other instrumentalists for another time. It's that good. Rockin' Mr. K simply kicks ass throughout: swinging, shuffling, driving the tunes and their jams with an easy grace that subtly masks a powerful and singular Rock drummer. Bill will never get the kudos given to the likes of Bonham or Moon or Peart, but his drumming is their equal as far as personal style goes. It must have been a pretty tall order for Bill to muster up the attention and creativity to keep up with Weir and Garcia, let alone Lesh, and yet, there he was for years, setting them up never getting knocked out. At times, the music on Dave's Picks v. 5 sounds like a suite for drum set with accompaniment. It's instructive that there is not even the usual drum solo feature to this show. He played so much, there must have been no need felt for one.
From Marin Jr. College, Mr. Philip Lesh on the bass provides his usual ranging, woody sounds to the songs and the jams. Of all of the tones that distinguish the Grateful Dead's sounds over the years, it may be the timbre of Lesh's early 1970's playing that Disaster Amnesiac loves the most. Thankfully on v. 5 it is fully present in the mix. Lesh never relegated his playing to mere support, and, particularly in the Playing suite, he is front and center, mixing it up with Jerry, responding, jabbing, laying back and then attacking with his characteristic ferociousness.
Another factor of the 1970's Dead sound that is proving to be a deep well is the keyboard playing of Keith Godchaux. It is said that he was a very quiet man, but, his presence within the music is anything but that. Keith's acoustic piano sounds great when he boogies on tunes like Deal and Ramble On Rose and also when he dives in with rest of his compadres during the spacier sections. His sound defined the band as much as any other member in the early 1970's era.
Disaster Amnesiac must of course mention Donna Godchaux, and although her presence is somewhat lacking on the discs (what could she have been doing for close to an hour during the Playing jam?), she does manage to hit her trademark wail after the bridge section of the tune, and her Country training works wonders in The Race is On.
If Dave's Picks v. 5 is any indication of the high quality Grateful Dead live recordings that the folks over at Dead.net are preparing for 2013, Disaster Amnesiac suspects he's going to be mighty pleased with his subscription. The 11/17/1973 show documented therein is quintessential and powerful, documenting the band at a high point in the middle of an era that was chock full of them.
Posted by Mark Pino On Drums at 4:19 PM 2 comments: