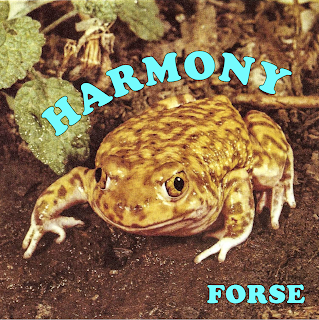 So this last summer, Mrs. Amnesiac and myself painted our garage. Naturally, I wanted to listen to music during this process. We chose a lot of CDs by guys and girls strumming acoustic guitars for ballad types of forms, and these mellower types of vibes really fit into the process, along with enhancing the desired mood. Over the course of several of these painting sessions, Disaster Amnesiac was reminded how cool the simple, stripped down approach to music can be.

This reminder primed me for Harmony, the 2020 release from Forse. The 13 tracks that make up this digital/cassette release are all written and performed by this one guy. He seems to be coming from the Jonathan Richman school of naive, self contained song writing. This is not to say that Harmony's songs are simple jacks of Richman or any other, for they are not. His singing style is sweetly naif as it invites the listener to sing along about issues such as finding employment in I'm Looking For a Job and simply being content in Alright, Sincerely. Listeners with children will find a great family singalong in Put Your Finger Everywhere (think boogers...ear wax...), and the star obsessed, within the global musical underground, will love Henry Flynt and Moe!/Salaryman. Disaster Amnesiac hopes that the latter is about Oakland based drummer/composer Moe! Staiano, that's for sure.

Harmony's musical sparseness is astute. Forse generally keeps things pretty simple, with cleanly strummed guitar lines or simple keyboard progressions providing the musical backdrop of the songs. This simplicity makes for an inviting vibe throughout. The instrumental - provides a fine example of what Disaster Amnesiac is talking about here, as does opening track She's Afraid Of the Dark and penultimate piece Something You Have To Change. He's not afraid to use tastefully placed overdubs and multi-tracking on many of the pieces on Harmony, though, and these give the album a band-produced feel. I actually had to send Dischi Amici label head Vasco an email to clarify that Forse is indeed one person! Said simplicity makes for a fun, hassle-free listening experience. You'll surely find yourself singing along as meanwhile these riffs will be sticking to your perception like paste onto paper.

With Harmony, Forse has crafted a very catchy, user friendly album of very enjoyable Loner Pop.  Cop it, press play, and prepare for some smiles, no matter what you may be doing or undoing. 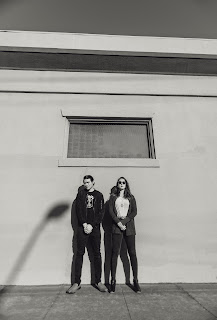 SF Bay Area duo Grex's new album, Everything You Said Was Wrong, has made its way into Disaster Amnesiac's listening rotation, and I'm very glad for it. As I've heard the 16 tracks of this great release, I've often had thoughts about Fusion. Mind you, it's not a Fusion of the 1970's variety. In terms of said style for Grex, I have to say that it feels to Disaster Amnesiac that they are working on more of a 21st Century Fusion. The tracks within Everything You Said Was Wrong show thoughtful, crafty blending of elements that shape music currently, at least as far as I can perceive it. Hip Hop, Jazz, Free Improvisation, the various strains of Dub, Heavy Rock: all of these and more rise to the surface. That said, it's a delight, the way that keyboard player/vocalist Rei Scampavia and guitarist/vocalist Karl Evangelista, aided on the LP by percussionists Nava Dunkelman and Robert Lopez, mix these various elements into a sound that is very much their own. It's easy to hear and feel their unique band voice. Surely, that's not an insignificant achievement within the music industry, and Grex should be acknowledged and rewarded for this. In Disaster Amnesiac's view, there are tunes on Everything that could and should be hit singles. The musical craft and intelligence shown on tunes such as Beepocalypse, Husk, Gone, and Goodnight would seem so refreshing on my Youtube feed of current industry offerings, if for no other reason save the knowledge that there's music like this out there. Then you have the gorgeous Satie-like craft of Walking Ayler in Tarzana and the spooky Trip Hop of Boo Ghost or Margot Tenenbaum providing lateral moves into more abstract zones, by turns cerebral and concrete. The way that it all hangs together, all the while within a clearly defined band voice, man, I like it. A lot. As such, Disaster Amnesiac wanted to reach out to Grex, ask some questions, and get the skinny on this fine release from the minds of its creators. Hopefully its title does not refer to things said inside of their musical world, because they are doing just about everything right therein.

For people who aren't familiar with Grex, please give a bit of background. What are Grex's origins?

Grex was formed in 2009 at Mills College. I had been studying under (the great) Fred Frith and Art Ensemble of Chicago co-founder Roscoe Mitchell, both whom of emphasized the importance of rigorous practice and personal discipline. Rei and I formed Grex as a kind of amateurish escape - a way of rediscovering the joy of the creative process away from external pressures.

In biological terms, a "grex" is an entity - a slime mold - composed of several smaller organisms. Rei selected the name. We thought it appropriate for this project, which was always intended to be a converge of disciplines, genres, and interest.

Grex songs are very unique. I am curious as to what your song writing processes are. Do you have multiple methods of song development? What goes into the act of crafting a Grex song?

Karl: Thanks so much for saying so!

Our creative process has has gone through a series of very significant changes over the course of our time together. At first, Rei and I co-composed in a very literal sense, writing lyrics in alternating couplets and assembling harmonic structures one chord at a time. These days, one of us will write either most or all of a song independently, applying finishing touches in rehearsal.

The one significant (practical) change you may detect on Everything You Said Was Wrong is the dominance of samples and electronic sounds. Every sample on the record was first “performed” in real time (i.e., nothing was programmed in the pedantic sense, and we refrained from using quantization), and a lot of the record was written using drum and percussion elements, rather than guitar or keyboard parts, as a base.

As I've listened to Everything You Said Was Wrong, I've marveled at the lyrics. Karl's seem to be from a declaratory place, while Rei's seem more like Symbolist poetry at times. Please describe some of the influences or aspirations in your lyrics.

Karl: Grex has traditionally traded in surrealism and lyrical abstraction, and Rei’s lyrics in particular  (on “Beepocalypse” and “Feather Chaser”) continue this practice. Even the songs that I (Karl) wrote for Rei’s voice - like “The Other Mouses” and “Ikki” - are meant to sound evasive and, well, lyrical. We borrow liberally from a tradition of poetic irony that encompasses both classic psychedelic rock (including Pete Brown, who was Jack Bruce’s lyricist) and more contemporary songwriters like Fiona Apple, St. Vincent, and Mitski.

Karl’s leads are a new element, and they’re the end result of a long process of navigating the balance between aggressive abstraction and political grousing. At this time in history, it feels necessary to speak directly and explicitly to social concerns, even if your language is itself kind of elliptical and stream-of-consciousness. The male verses are hip-hop (n the plainest sense), and we take our cues from the likes of MF Doom, Death Grips, Quelle Chris, Moor Mother, and Odd Future.

Also regarding lyrics, I get a sense that you're both pretty literate. Some of the lyrics give me an almost Cyberpunk feeling. Are either of you Sci-Fi fans?