Disaster Amnesiac has been aware of Jackie and Matt McDowells' individual musical projects, Inez Lightfoot and Sagas, respectively, for a while now, but this is the first I've heard from their duo, Sun Cycles. Woods Creek Demos features an Appalachian trance/drone sound, conjured up from the interlocked guitar playing of Matt and Jackie's mountain dulcimer and raw fiddle sawing. The former gets deeply, darkly emotional and expressive on Seven Smokes (ably abetted by the fiddle), while the latter plays heavily percussive and rural on Black Dogs and Winslow Hill. Northern Latitudes strikes Disaster Amnesiac as having as much on an L.A. lope as that of Fairbanks, while Cat Litmus brings shruti to Allegheny County. Adding to the rural feel of the release are the down to earth vocal styles of the McDowells, Jackie's soprano on Pretty Saro's Old World waltz in particular.
These demos seem to have been cranked out all in a day, but the sound is pretty far from haphazard. These tunes' Appalachian Psych emerge from deep, ancient musical wells. I know that I've enjoyed hiking along their trails.
Posted by Mark Pino On Drums at 8:37 AM No comments:

Disaster Amnesiac can recall a period, back in the early 2000's, when I was pretty obsessed with Toiling Midgets' web page. I checked it a lot, and it said, for years, something to the effect of "more coming soon". I was dearly hoping for archival recordings to be posted, but, years passed, my circumstances changed, and I just stopped going to that particular URL.
Having remained a big fan of Toiling Midgets, I was happy to see their presence on Facebook, and pretty well delighted to see that, in recent months, they've set up a Bandcamp page, and are finally getting archival, as well as new, sounds up for public consumption.
Out of the current five archival releases at toilingmidgets.bandcamp.com/, Disaster Amnesiac just had to start with God's Man, six pieces of prime Toiling Midgets tune-age from 1989. It strikes me that these songs are kind of transitional ones, as they were waxed right in between the Ricky Williams and Mark Eitzel eras. More on that in a bit.
One of the compromises that bands make seems to be that, if they have a lead singer, this individual will inevitably become the main focus of most audiences; some bands just dispense with the lead singer altogether, something Toiling Midgets have done more than once. That said, in Williams in particular, they really lucked out as far as having compelling front men goes. Still, the sense I get is that, save for one tune here, they wanted to stick with their all-instrumental format with this material.
God's Man can be broken down into two halves. The first  half, comprising about two-thirds of the release, feature Toiling Midgets in their more Dead Beats mode, with the sublime twin guitar harmonizing of Paul Hood and Craig Gray swooping, chiming, clicking, and wailing. Forget Page and Beck, or Downing and Tipton, it's Hood and Grey who have perfected the twin guitar attack within a Rock band. On songs like It Is Home and The Brush, their playing is by turns harrowing and gorgeous, and always a thrill. These instrumental tunes get their rhythmic push from the late, great Tim Mooney's tom tom/tambourine heavy drum patterns and Lisa Davis' tight, plectrum-strummed bass lines. Toiling Midgets have always had their own, distinct and distinctive rhythmic feel, and it's very much on display on God's Man. Seeing as how they've had so many bass players, this is mostly due to Mooney's prodigious talents behind the traps; from the consistency of the bass sounds, though, it's clear that they have always chosen bassists who understand and fit it with their musical conceptions. The bass often carries the melodic frame of their tunes, as Mooney's drumming propels them forward and the guitarists' go off from there.Take a listen to the title track for ample proof of that.
Returning to the "transitional" theme, Disaster Amnesiac gets that sense from God's Man's second half, the tracks Mr. Spine and Wet Ash. These two feature a bit of the more heavily produced sounds that would emanate from 1992's Son, in that the orchestrations feature horn, string, and vocal sounds. Tom Mallon's Wet Ash Orchestra, presumably made up of synthesizer patches, plays the tune on Wet Ash, while Paul Hood's vocals presage the coming cries from Mark Eitzel in the early 1990's. The two tunes sound to me as if they are thematically linked, a small suite of sorts. Along with sounding a lot like Eitzel, the overall theme on Wet Ash has a lot of his trademark depressive feel. Of course, Toiling Midgets have always had a darker, ominous edge to their sound, so it's not that big a stretch. Interesting, nonetheless.
The band did a great job with the sound of this release. It is listed as having been sourced from cassette recordings, but all elements are clear; it's a fine, listenable mix. It's clear that they put some TLC into this one's post-production.
"All good things in their good time" would be an apt descriptor for Toiling Midgets. In their 30 plus year career (!), they've not been as prolific as many of their fans have probably wanted them to be. If you count yourself within that demographic, you'll probably be excited as Disaster Amnesiac is, about their rapid (for their pace) on-line release schedule. Hail the Micro Age!
Posted by Mark Pino On Drums at 1:26 PM No comments: 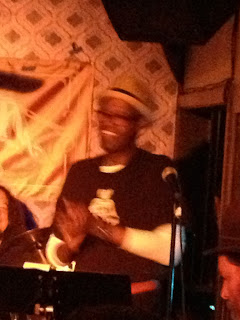 Disaster Amnesiac was delighted with and moved by the massive GROOVE of Tenth Planet, Malcolm Mooney's Can re-up at the very tiny Oakland bar, the Layover.
The group did a fine, hour long set of Can's Trance Psych tunes, conducted by Mooney's great stage presence and genuinely Beat Poetry sense.
Man, what a rhythmically exciting show!
I give myself bonus nerd points for being the only person in the joint rockin' a tie dye, but, hey, it's all about the music, anyway, and did I mention the GROOVES? Yes, massive indeed! 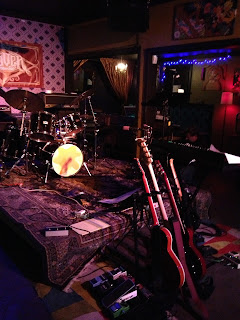 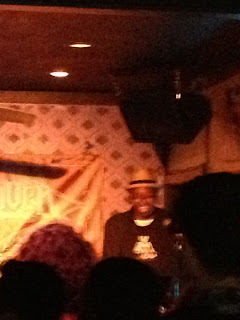 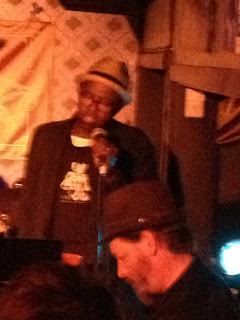 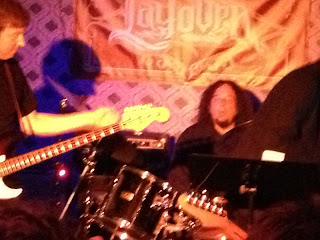 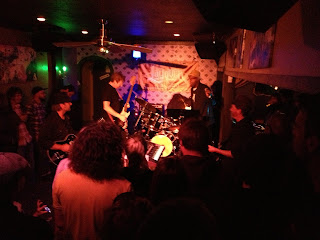 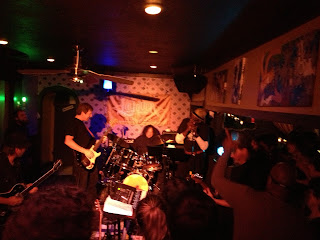 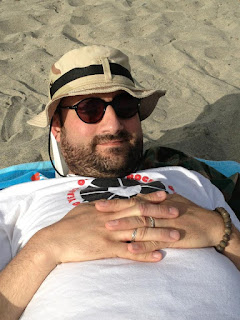 Disaster Amnesiac is a term that I nicked from Mike Davis; it appeared somewhere in his essential L.A. book, City of Quartz. The city and its environs, so well documented in that 1990 masterpiece, has often sparked my imagination, be it the music or the film culture or the visual art scene. While Disaster Amnesiac feels comfortable and very much at home in the SF Bay Area, it is often the emanations that come my way from points south that turn me on.  As I sit here today in El Cerrito, the fog of San Francisco Bay cooling my head, I feel compelled write a few words of impression, the impressions of an enamored, admitted tourist.
Mr. and Mrs. Amnesiac's main reason for our brief stay in Oceanside was the fulfillment of a final request of a now deceased relative. Rick C. had spent a few of his later years there, and wanted some of his ashed spread at Ponto Beach. Seeing as we were his only relatives in California, the task fell to us. I just loved the various aspects of beach culture that I saw while staying there: the bright pastel signage, the ever-relaxed and somewhat dazed surfers, the old cars, the ominous June Gloom effect, the Marines from Camp Pendelton, the beach hotties, the grizzled yet somehow just as fabulous beach bums, the evangelical types. It all made for a perfect California swirl within my head. Yes, I know that this may sound like the narcissist raving of a Cali hash head; hell, it most definitely is that. Still, California is my state, so, despite being, really, some 300 miles (483 KM) removed from it, I celebrate, cherish, and love it. Disaster Amnesiac was so glad to be immersed in it, if only for a few days.
Having driven down to SoCal, and having basically done a brief afternoon driving tour of LA proper, I can say that it was a fine way for myself and my wife to take in Tinseltown. We sat in interminable traffic, were jostled by crappy paving, and got cut off by overly-aggressive drivers. We also thoroughly enjoyed taking in the vista of the city from Sunset Strip, swooned at the blue waters of Malibu Beach, marveled at the endless rows of glitzy shops and huge movie advertisements, imagined ourselves watching Hair Rockers crash and burn in Hollywood (I also recited Jack Brewer lines to myself when looking at Pedro Harbor from Santa Monica), felt the very Conservative vibes of Simi Valley and the hidden-away migrant ones of Fillmore and Santa Clarita.
As we headed north, back over the Grapevine, we felt as if we knew our fellow Californians of the southern variety a bit better, and also felt better for it.
Previous to this trip, the  last time that Disaster Amnesiac had been in the  LA area was in 2003. My last action that time featured me splashing around in the water of Malibu Beach, my un-lotioned skin burning in the sun, yelping like a joyful dog as the salt water escaped the sea, into my mouth and out. I really hope that it's not another decade before I get back to SoCal.