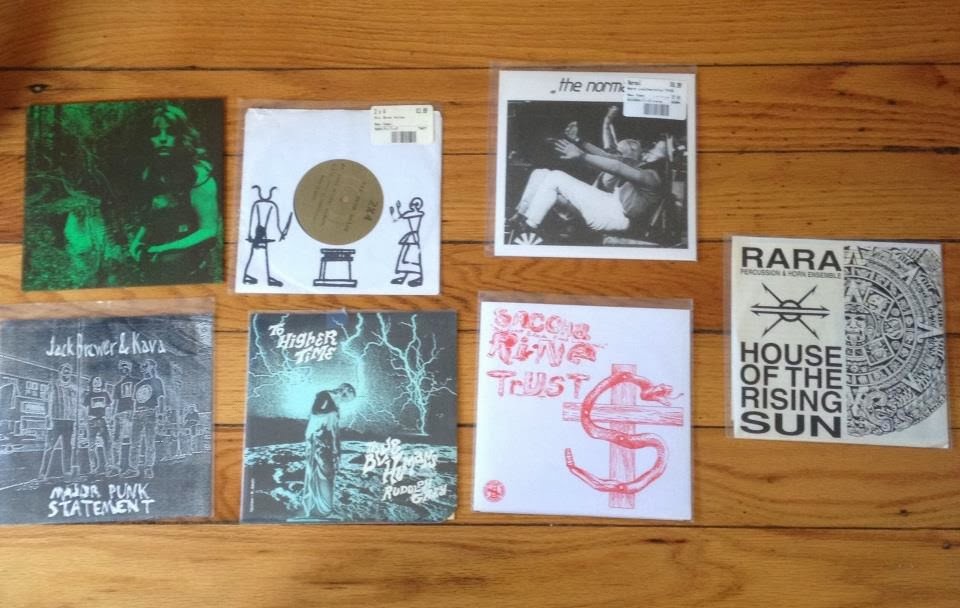 Disaster Amnesiac is very grateful to be employed at a place where I get not only Thanksgiving Day off, but the  next day as well. I figured the down time would be a great opportunity in which to dig into a few 7" record purchases of the last five years or so. These seven discs were chosen pretty much at random, but it would be a bit of a fib if I said I haven't wanted to describe and enthuse about all of them at some point.  Alright, grab a slice of pie or some left over grub from yesterday and enjoy!

A.H. Kraken-Gianna Michaels/Je Suis Ton Marecage; Sweet Rot Records
It seems like the brilliant Metz Punk Rock scene of the mid to late 2000's has tapered off production a bit, but Disaster Amnesiac still very much enjoys the raw and rippin' sounds from groups like the Anals, Plastobeton, and the mighty A.H. Kraken.  Here we get two trebly tom tom pounders from these Alsatian kings, skull pounding repetitive riffs with slightly cooler and less angst-ey vocals than on the LP. Sort of like a tighter version of Mars's early No Wave crush.

2X4-Six Drum Solos; no label listed
This one's always been a head scratcher to me. I ordered it from Chi's venerable Dusty Groove Records, but can't recall what exactly sold me on it. If you like the sound of relatively simple beats played on a rather beat up old drum kit, you'll find sounds to enjoy here. Disaster Amnesiac wonders if this one is intended mostly for DJ's to use. There is scant info listed on the equally primitive cover here. The world's full of mysteries, and 2X4 counts as one of 'em.

The Normal-TV O.D./Warm Leatherette; Mute Records
Of course, this is thee Post-Punk jam. It's so nice to hear the crisp, computerized percussion of this one, paired with the dour lyrical delivery and swirling, whirling synths. Disaster Amnesiac has somewhat embarrassing personal memories of doing the Spooky Dance to these tunes as a Goth-like adolescent creature at some dorky club in Mannheim, but I'll spare you the details of that and just say that this 7" is an English musical high point for sure.

Jack Brewer & Kava-Major Punk Statement; Carducci.2 Records
I was stoked to be able to find this early 1990's Underground gem on eBay for a relatively cheap price a few years back, being a fan of all things from all principles herein. Wilmington Poet Laureate Brewer gets all confrontational with some Chicago cue ball and brilliantly titles a track We're All Created By the Same God or Martian, while Kava gives Art Punk a good name with whirling energetic rhythms and crazy guitar skronk. Quoting Sonic Youth seems a bit beneath Jack's spieling skills, but he quickly ramps things up to his high levels of Word on the title track.

Minutemen/Saccharine Trust split; Water Under the Bridge Records
Greg Ginn gets thanked on the  liner note of the Minutemen side, and Disaster Amnesiac must wonder if that will be the case of subsequent reissues of this one, in light of the past summer's internecine war of the South Bay. The music included here features the cream of early 1980's comps, with D. Boon and his pals showing up with some pop culture philosophizin' on 9:30 May 2 and two tightly Wired bass-ey instrumental blasts to follow. Marc Bolan's Prelude sounds like they may have been drinking Pabst with the Plugz before they went into the studio to lay these tracks down. Saccharine Trust's side features their early, arty Punk grit, pushed energetically by Rich Wilder's awesome drumming on two tracks and free form piano jangles from Spot on a third. Baiza's in the house of course, what with his cutting SG tones and great art. Pettibon? Check.

That'll do it for this installment of the Disaster Amnesiac Chronicles. Can I also say that I'm thankful for every view over the past five years? I will, and I am. Until next time, have a great weekend! 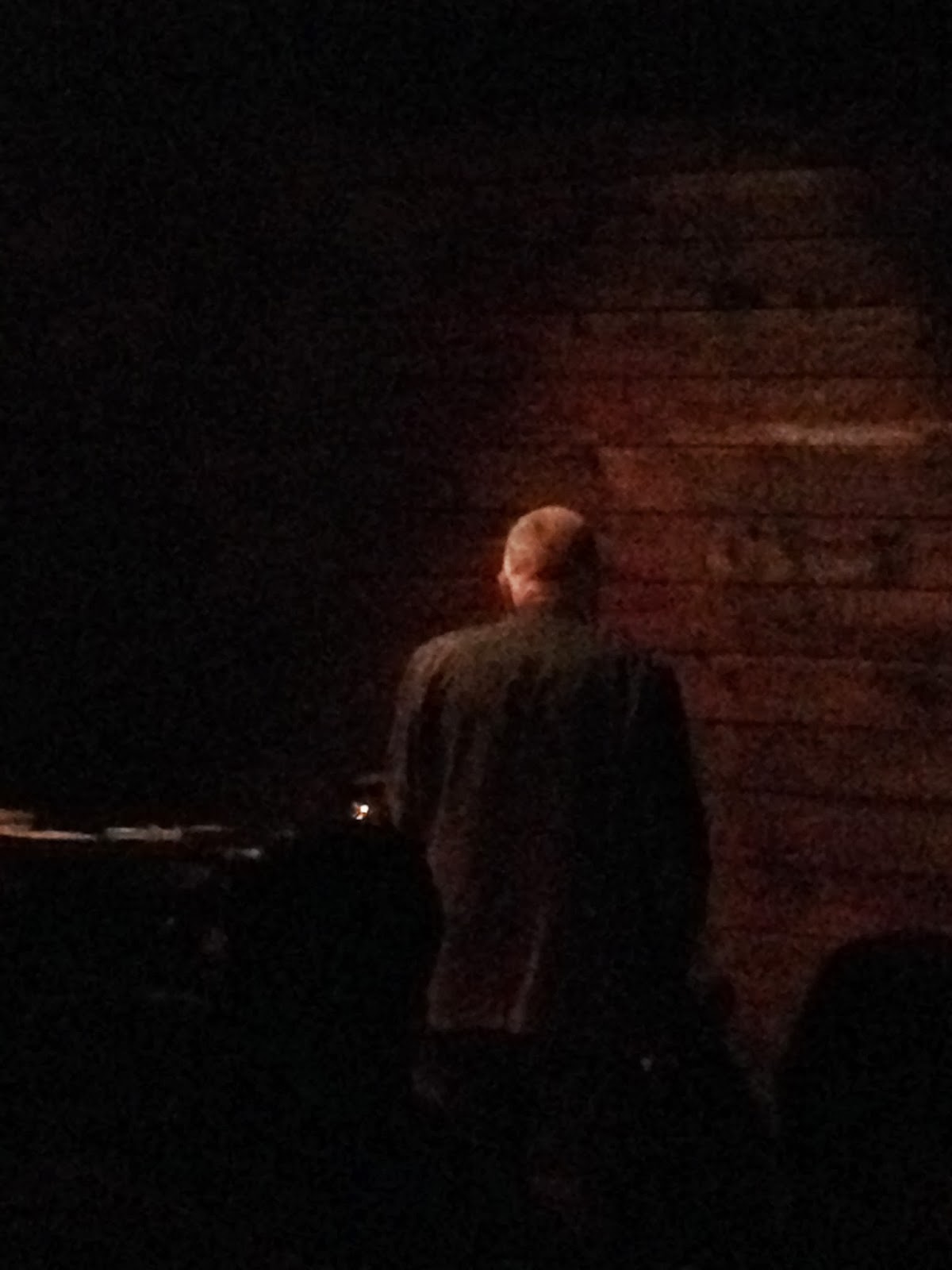 While crossing Broadway Ave. en route to Duende last night, Disaster Amnesiac had memories of listening to the bikes of the Hells Angels one summer evening in 2007, as they converged to celebrate the fifty year anniversary of the Oakland chapter.
I've gotta say that Peter Broetzmann and Paal Nilssen-Love's deeply energetic playing would probably give that rumble a run for its money, what with its full force balls to the wall blasting action. They came out swinging and pretty much did not let up for their entire one and one half hour set. Paal laid down a continuous poly-rhythmic road upon which Peter blew with abandon. Disaster Amnesiac is not sure that you could find a better drummer than Nilssen-Love; his energetic force really propelled the mens' duo exchange to intense heights of improvisational frenzy. Broetzmann's tenor, clarinet, and soprano playing invoked Ayler's ghost and Coltrane's sheets, but of course he's his own man, uncompromising in quest for improvisational Freedom. His tones just shred.
To whomever is booking at Duende currently, I tip my cap! Bring more Improvised Music Giants to Oakland! 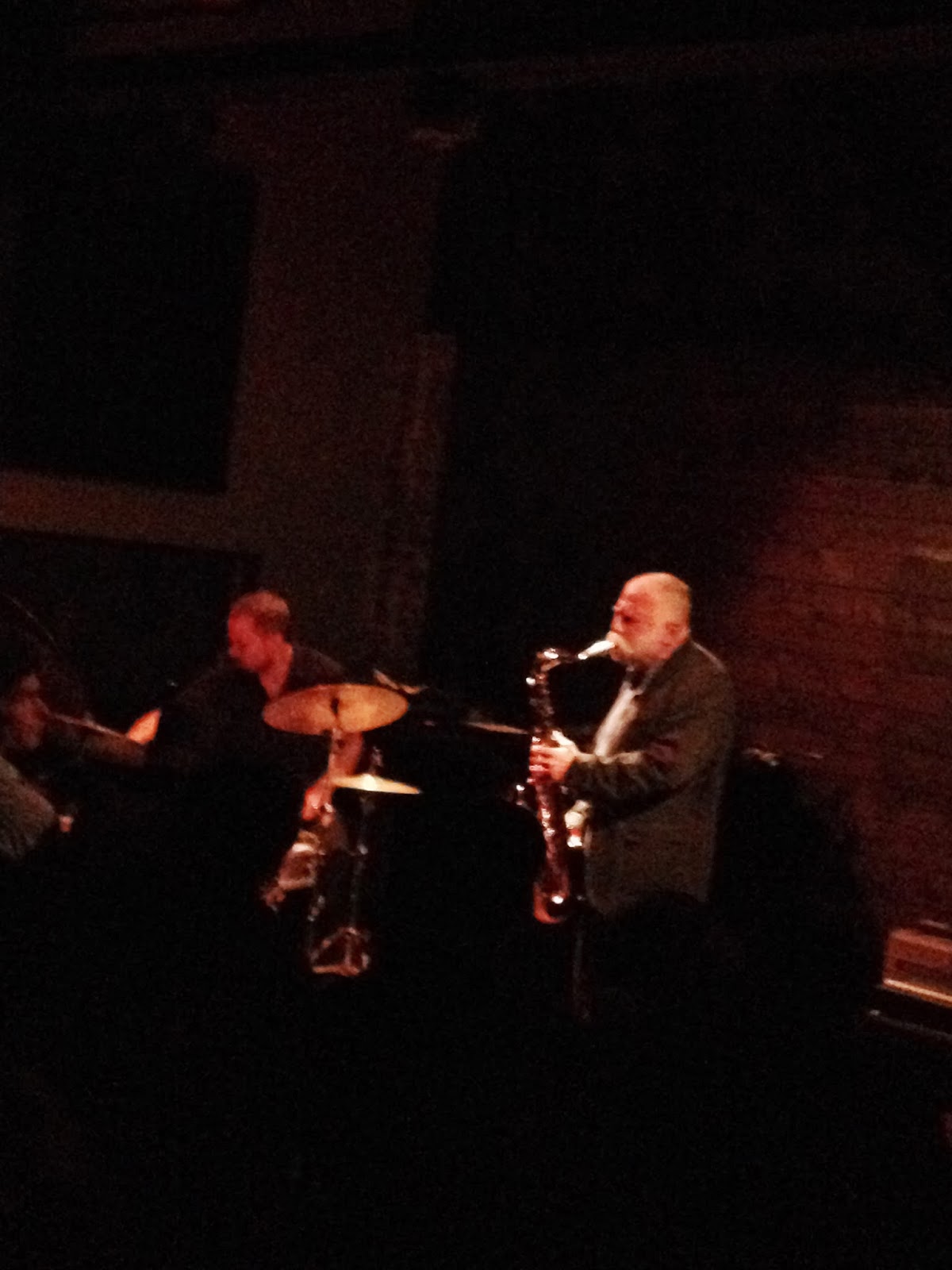 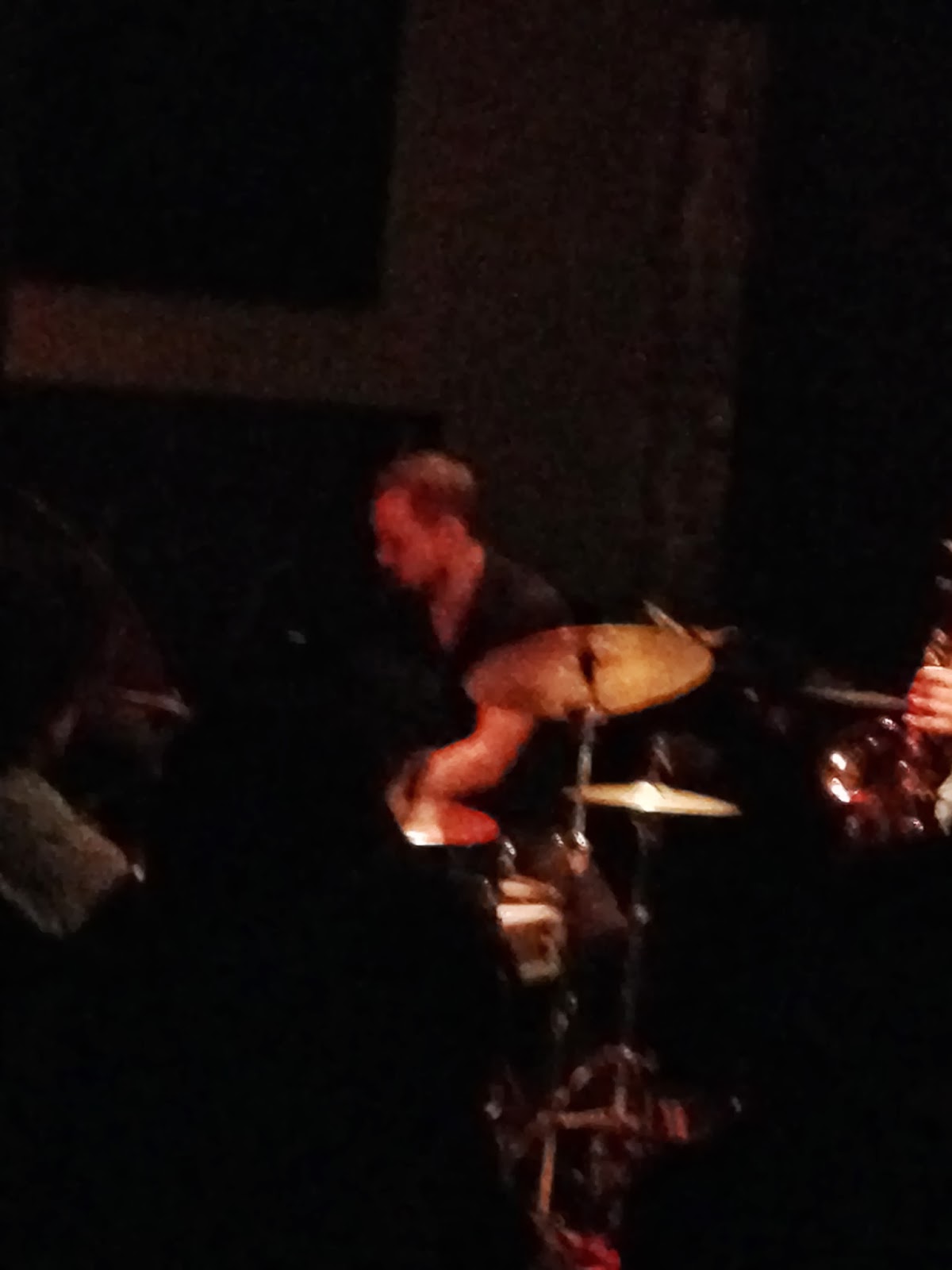 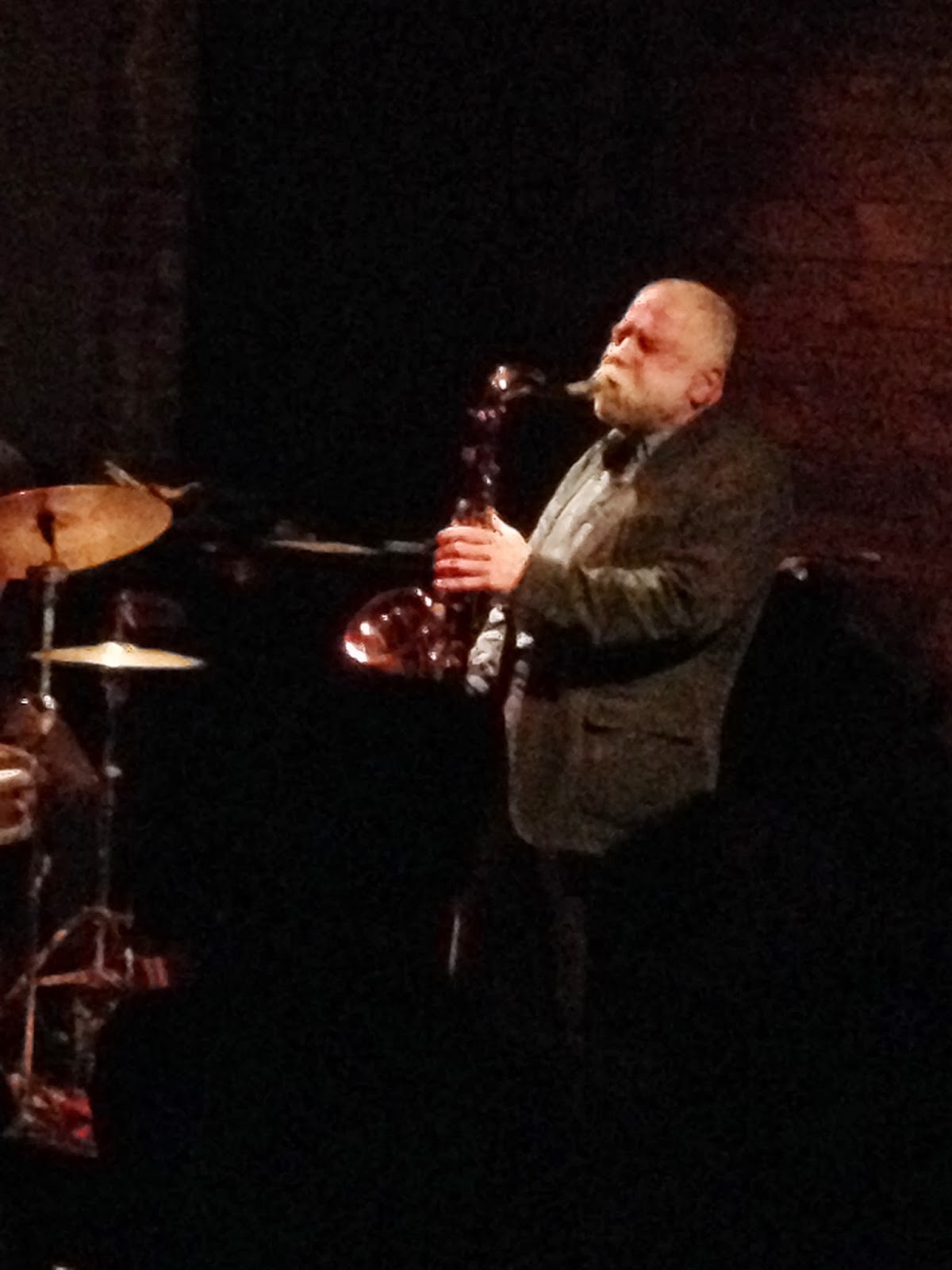 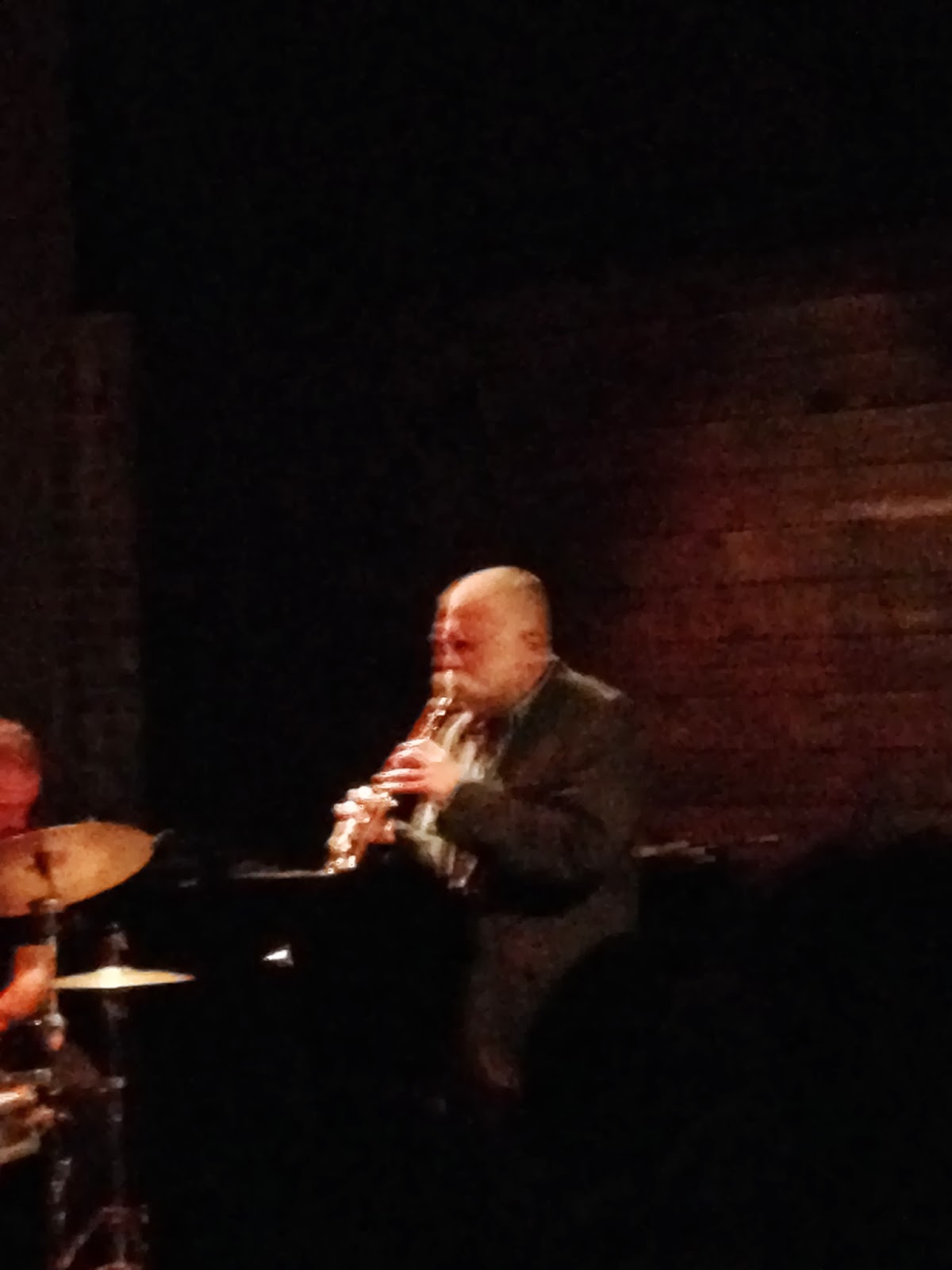 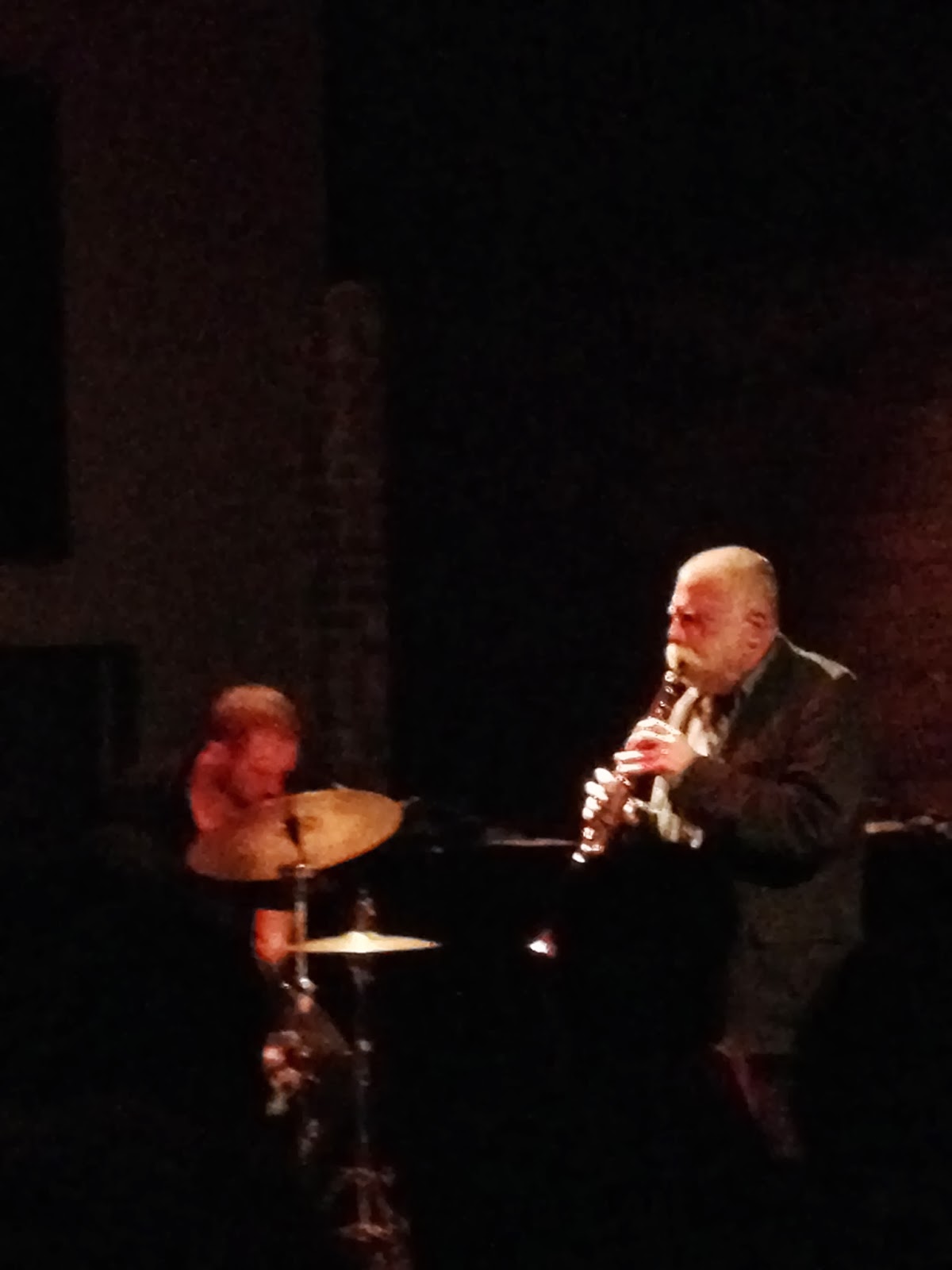 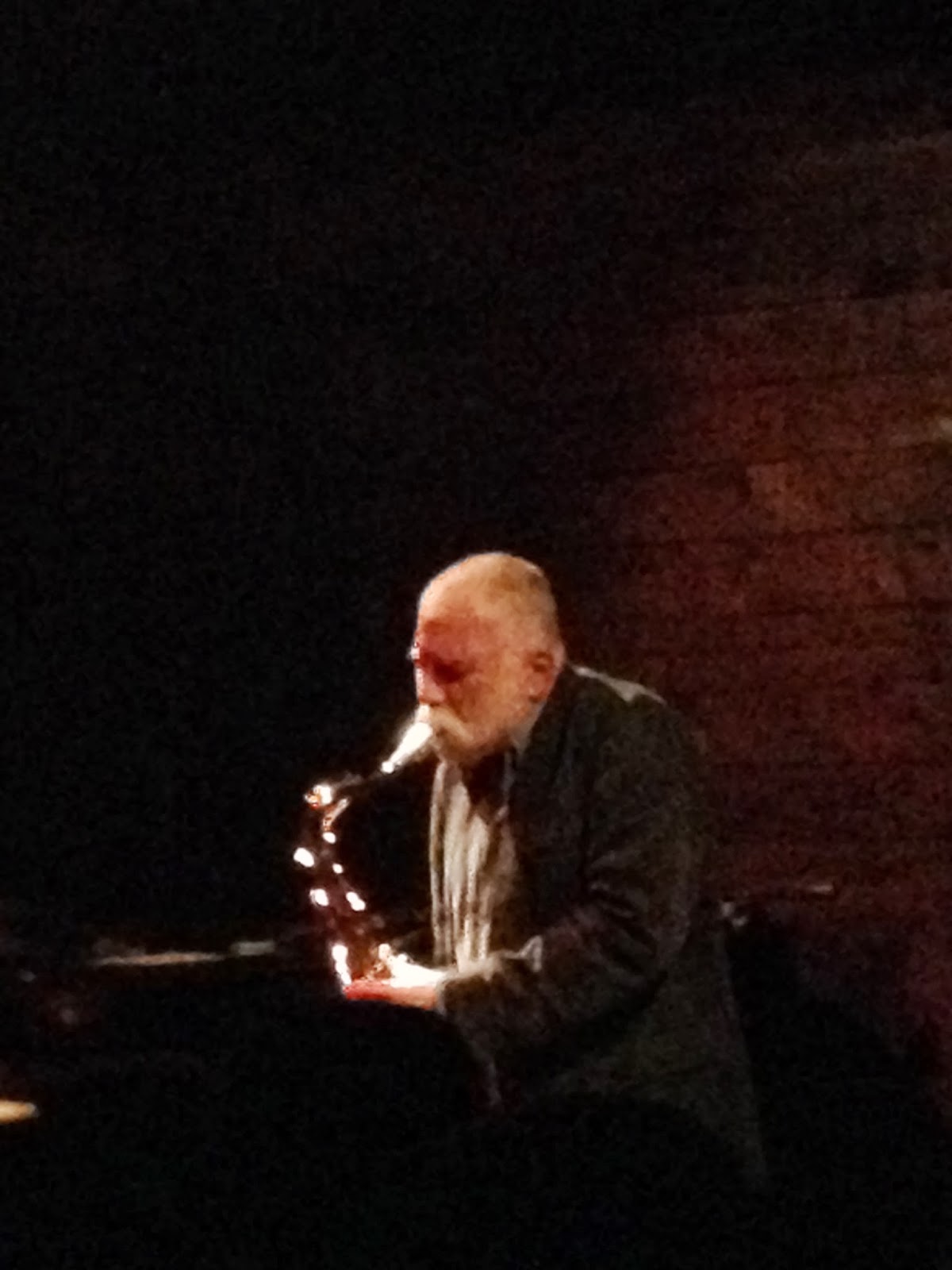 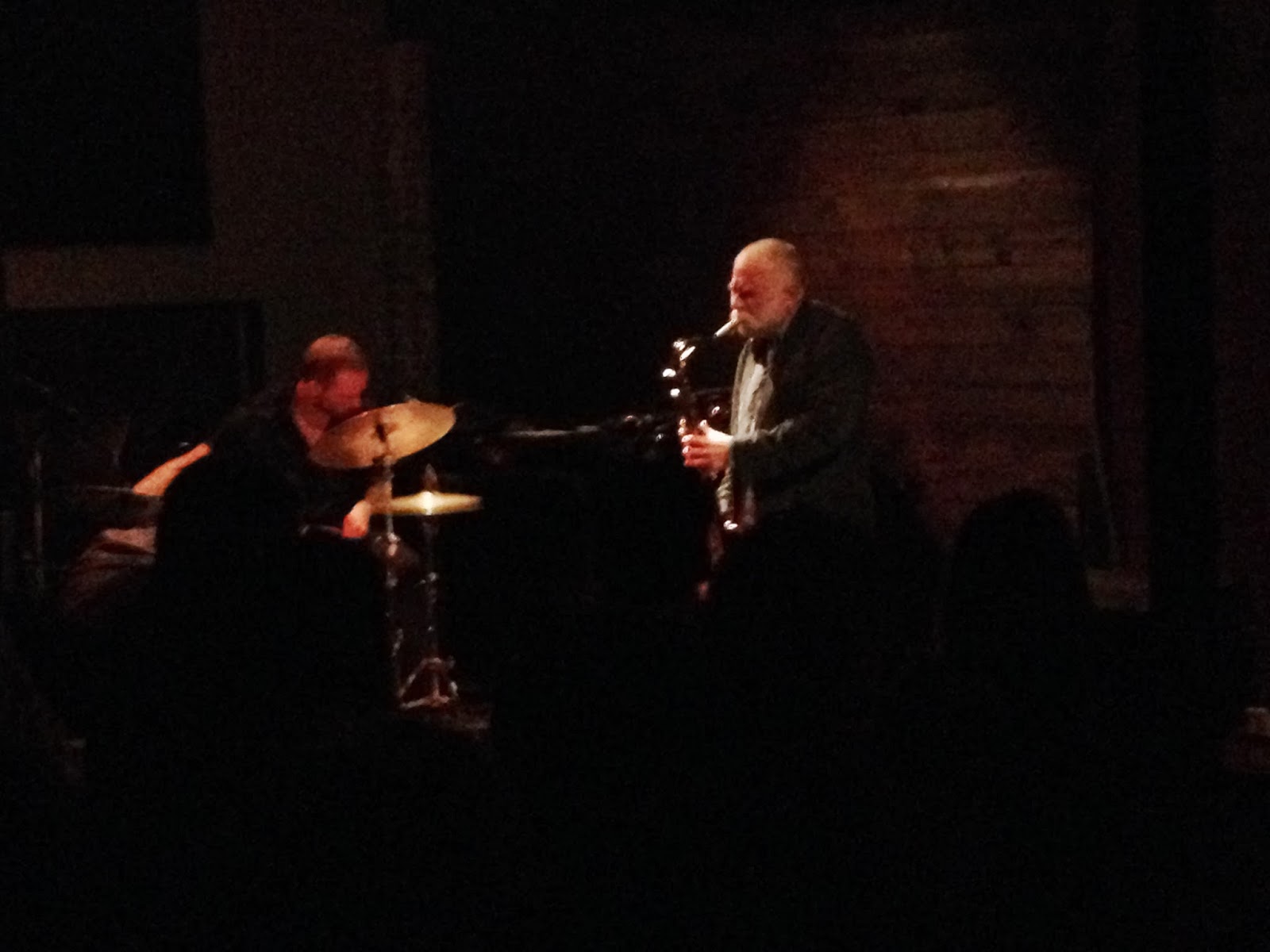 Above: Broetzmann/Nilssen-Love Duo shake the walls of Duende down!
Below: Broetzmann exits 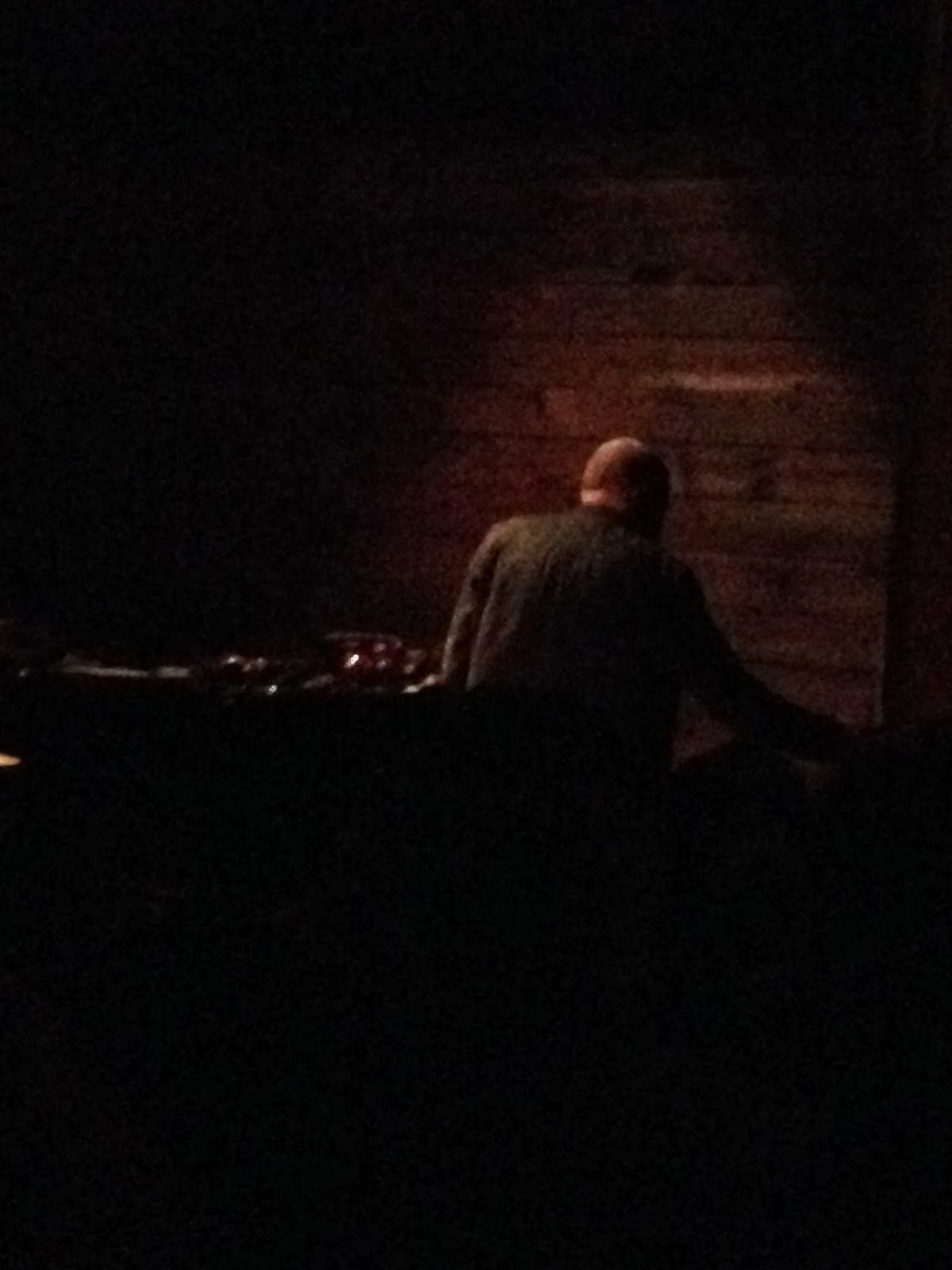 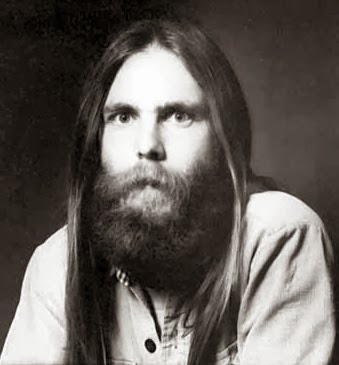 OK, OK, you can go ahead and count Disaster Amnesiac as a convert to early 1980's Grateful Dead appreciation. After listening to the tight, hot set from Atlanta's Fox Theater from November 30th, 1980, I've got to agree with Deadheads: the band had plenty of juice in the earlier part of that decade.
Juiced in many ways by their new-ish (at that point) keyboard player Brent Mydland. This, the first edition of the Dave's Picks run to feature the late Antioch, CA native, shows him invigorating the band. Disaster Amnesiac feels as if, with his addition, the Dead got not only a shiny new palette of sounds from his passel of keyboards (in contrast to Keith's primarily acoustic focus), they also got an "on key Donna", a harmonizer that could actually do so with a ton more precision than Mrs. Godchaux. There are so many examples of this new found excitement over the course of the Dave's Picks Vol. 8's three discs, so I'll just mention a few, such as his glassy fills during Lost Sailor or his Glass-ey Minimalism during Playing in the Band's ferocious middle jam section. The band sounds tightly focused throughout, even when spacing out during the fluttery Bird Song or knocking out the requisite cowboy jams of Me and My Uncle>Big River, and I can't help but feel that this clarity was in no small measure due to Brent's presence. Even ballads such as It Must Have Been the Roses and China Doll sound un-shambolic and on point.
Further examples of this set's robust vigor can be found in Loser's broad, heavy groove (topped off with an emotional solo from Garcia that drops with precision right back into the chorus), Cassidy's Allman Flavored twin guitar harmonic focus (a result of playing in the Peach State?), and Samson and Delilah's tight rhythmic strutting. Dave's Picks Vol. 8 features a band that is greased, primed and stompin'.
Disaster Amnesiac has seen at least two references to this show's Scarlet Begonias>Fire on the Mountain  suite as being one of the top examples of same, and, while I tend to like the more shuffle-based Scarlet of the 1970's, as opposed to the cut time feel found herein, its middle jam, featuring blazing Jerry/Brent duo exchanges and a precision pull into Fire from Phil, is most definitely a high point for the song(s).
Bob Weir has been quoted as saying that the 1980's were his favorite period of Grateful Dead musical production, and hearing his great slide playing on Little Red Rooster and the rockin' showmanship he brings to Around and Around (what's with the faux Brit accent, Bob?), the listener can hear him as he takes the reins of the band in many ways. If Garcia was The Leader, Weir was The Worker, the increasingly more effective mover and shaker of the whole thing as time progressed.
It would be difficult to mention any one tune on which the drummers sound great, in that they sound tightly locked throughout. Kreutzmann and Hart's tandem battery was really working for this show, and Disaster Amnesiac has thrilled at the Hart bongo-beat tom tom runs as they skitter over Bill's fluid ride cymbal sticking. Their solo feature is filled with interactive, often really quiet talking drums/tar chatter that leads into the full Beast onslaught. Powerful.
Despite being in the thick of The Heineken Years, Phil also sounds focused and present,laying down thick bass rumbles during tunes' changes and keeping pace with Jerry and Brent during the jam portions. Phil was having a good show, the band was having a good show, in 1980 even!
It's clear that there are tons of people who have been in on what was a secret to Disaster Amnesiac: the Grateful Dead could be just as powerful in the early 1980's as at any other time in their storied career. Take a listen to Dave's Picks Vol. 8 (if you can find a copy, it sold out in minutes!), and hear a sublime, powerful mixture of their formula as it unveils new aspects, grounded in what was at that time fifteen years' road experience and kicked into gear by new blood.

It had been a while since Disaster Amnesiac had looked into Aboombong's musical output, but I'm certainly glad to have done so recently, and downloaded his brilliant recent release, Adumbral: Etudes Dans le Controle Imprecis. Consisting of seven tunes, each designated by the letter K and then a number (Braxtonian influence?), Adumbral provides the listener with seven unique electronics/drums fields into which he or she can journey. Take for example the electronics as percussion of K1 and K4, during which Aboombong seems to make distinctive rhythms from his arsenal of electronics gear. Or, one might be more inclined to mentally fracture within the glitchy starts and stops of K7 before it ascends into Kraut-ey rainbows of sound. Long time fans of Aboombong will probably want to hear some of his great trap kit-centered beats: these can be found within K6 and K10, both wrapped within spare electronic zones. K6's later morphing into somewhat harsher sounds is particularly groovy to this listener. The album winds down with the desert mysteries of K11, in which the drums and electronics fuse into wisps of discrete movements over shifting sands of atmosphere. Lovely.
Adumbral comes wrapped in a gorgeous cover, an abstract, colorful calling card for a great statement from the experimental powerhouse known as Aboombong. Disaster Amnesiac is really looking forward to new releases from him, but, how will he top this?
Posted by Mark Pino On Drums at 1:13 PM No comments: