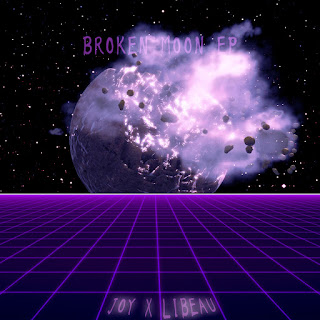 The call came in, and Disaster Amnesiac has answered. Mind you, I have ZERO idea of how Joy X Libeau got my contact info. That said, somehow a promo package of their EP Broken Moon ended up in my email inbox. This Electronic Music duo speaks in said package of collaborating with fashion boutiques and retail shops as means of getting their music heard. Disaster Amnesiac is the last person that would fit into the demographic for those types of spots, mostly on account of being a grubby dude just months short of the Big 5-0. It strikes me that this in itself is a pretty savvy way for a group to get their music heard, that's for sure.
And the music of Broken Moon? It's a really cool Electronic style worked up from the barest of tools: two analog synthesizers, one drum machine, and an Akai MPC. The resultant six tunes feature Minimalist beats and sounds that frame spoken lyrics from one guy and sung ones from one woman. Disaster Amnesiac really enjoys these songs, especially for the sparse Electronic Music modes which they feature. For me, they bring to mind some the early Hip Hop that I was exposed to as an adolescent, along with various strains of Dance Music that I am aware of from being on Boomkat's Manchester-based email list and reading Wax Poetics pretty avidly.
Small sounds pop and bleep into beats that swing in very cool ways, the synthesizers provide dramatic washes above them, and the lyrics are smart and intriguing, along with being astutely delivered. A fave line, "...shame has crumbled the tower/shame has dusted my prowess..." really resonates on multiple levels for this listener.  There's a kind of downtempo darkness within most of the tunes, but the music that frames them provides some light, and, with it, balance.
Broken Moon is a soulful statement that succeeds with creative use of self-imposed limitations. Disaster Amnesiac is puzzled as to how Joy X Libeau figured out to get these tunes to me, but I'm certainly glad that they did and that I got to hear them. .

Posted by Mark Pino On Drums at 7:07 PM No comments:

Over the long course of time in which Disaster Amnesiac has been blogging, there have, of course, been several ideas for posts that have been considered, forgotten, or outright abandoned. Some have been comprised of ideas even sillier than those that have posted, others have just kind of slipped away. Being a bit of an obsessive type, I have a short list of releases that have not ever been attempted but not completely abandoned. Presented here are a few from the "H" section of the stacks.... 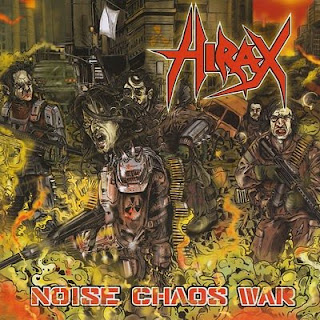 Hirax-Noise Chaos War, Thrash Corner Records; 2010
If memory serves correctly, Disaster Amnesiac downloaded this compilation of then recent short releases from Hirax right upon its release. Having been familiar with the band since their first LP in the mid 1980's, but also having pretty much tuned them out since that era, I was pleasantly surprised with the group's developments. First and foremost, singer Katon W. De Pena's voice sounds very pleasingly leavened throughout. His high notes are not quite as high, which really works within the Metal setting, at least for this listener. He also affects more of a growled approach throughout, and, again, within this Thrash style, it's much more effective and cool. Tight rhythm section arrangements, exciting Thrash guitar riffs, and balls out post-Slayer guitar solo riffs put Noise Chaos War pleasingly over the top for this fan of the style. Disaster Amnesiac wishes that I could find individual players to credit for these moves, but online lists of the various guys who could have executed this work are baffling. Suffice it to say that Noise Chaos War presents a group, unified around their visionary Metal guy leader De Pena, that knows exactly what it wants to do, and does it in to a T. Since my initial listening to this release, I've had the pleasure of seeing Hirax live, and they certainly do kick out the jams with aplomb. If you're ever in the mood for expertly done American Thrash Metal, Noise Chaos War will set your head a-bangin'. 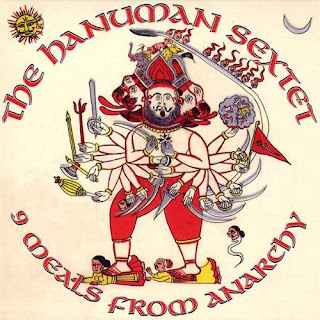 The Hanuman Sextet-9 Meals From Anarchy, Resonant Music 007; 2010
Here's another one that Disaster Amnesiac grabbed relatively soon after its release. I can't recall how or where I heard about it, but I can recall being really excited by the sounds that Hanuman Sextet achieved on 9 Meals From Anarchy, and I definitely remain so. The sound of Anarchy is a really sweet, juicy mixture of woodwinds, guitar, electronics, electric harp, bass, and multiple percussion. All of these elements mix in a really fine, harmelodic way throughout the disc. Aspects of various world musics, Jazz, Rock, and Improvised Music are all thrown into this mix, and it works really well throughout for this listener. Whenever I play 9 Meals From Anarchy, I delight in the polyglot blending of its tunes, and marvel at how well that they all hang together. The levels of improvisational musicianship and song writing is very high here. I'm not sure of where most of the players in The Hanuman Sextet have ended up. If you do, please let me know. Their stuff is solid, as 9 Meals From Anarchy amply demonstrates. 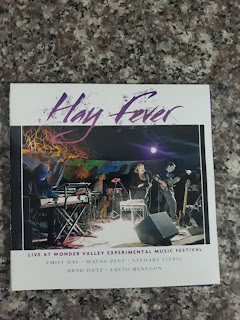 Hay Fever-Live At Wonder Valley Experimental Music Festival, self released; 2014
Last up we have Live At Wonder Valley Experimental Music Festival from Emily Hay's Hay Fever. Flute player and vocalist Hay leads a quintet of some of Southern California's eminent improvising musicians through five tracks in which their sounds frame her Fluxus singing styles. Hay uses a kind of odd scat approach that is often processed electronically, and the result is otherworldly. The group's sounds bubble, click, and shimmer around this action. Hay always sounds as if she's having a blast, freaking out underneath the desert sky above the Palms Restaurant outdoor stage (where this set was captured), and the band responds accordingly. What Disaster Amnesiac has always loved about this disc is the ways in which the band achieves this kind of bent out of shape, twisted Prog feel as Hay bugs out within and around it. It's truly, and deliciously weird. Live At Wonder Valley presents a group of musicians who are mining a VERY singular sound; this music is incredibly original and delightfully odd. Its sounds really do seem to come from musicians who are totally committed to personal, unique expression. That they manage to pull this off as an improvising quintet is remarkable and great. Find this gem of a disc at all costs!

So there you have it, a few of Disaster Amnesiac's long-contemplated raves for some long-admired releases. I'm currently listening to a more recent release, which I hope to enthuse about soon. Until that time, be kind and don't forget to dig some of your favorites if you've got the inclination to do so.
Posted by Mark Pino On Drums at 6:40 PM No comments: