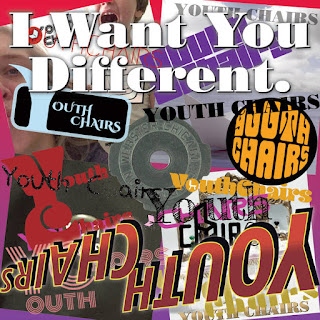 David Winogrond and his pals in Youth Chairs continue their interesting Renaissance this year with two new tracks of classic Pop Rock jangle!
First up, we have the the gritty guitars of Larry Jacobson pairing with sweet vocal delivery from Kim Dart Hurwitz and Gabriele Morgan on I Want You Different. Disaster Amnesiac really digs the way Youth Chairs utilize both of their vocalists on this tune. What an astute move, both personally and creatively. Regarding the latter aspect, it just works on a harmonic level. It just strikes me as a neat bit of flexibility in the case of the former. Different's 1:49 duration swings by with a classically Los Angeles Pop sensibility, showcasing a sweet little solo riff and a tom tom pounded bridge. Wall of Sound fans, take note, as it checks all of the boxes from that particular aesthetic. Really good stuff, Disaster Amnesiac just wishes that it was a bit longer! 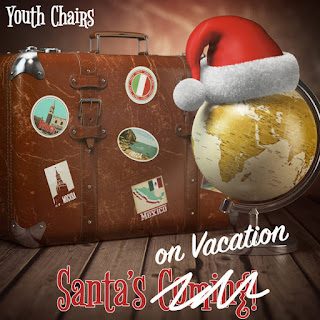 Ho, ho, ho!, and next up, Youth Chairs present a Christmas song! On Santa's On Vacation, we get more of that 1960's straight up rhythmic slide, propelled by higher bass notes from John Richey and Dave's propulsive high hat riding. Morgan's lyrics have Mr. Claus heading south for surf and chicks; why not, the guy's worked so hard for so long. Surely Amazon has given him a run for his money, too? Disaster Amnesiac is really digging the brief instrumental break, which is squeezed tightly into the very well crafted tune. Again, a very Los Angeles bit of sunshine Pop is featured here to great, toe tapping effect.

Fans of Power Pop take note: Youth Chairs continue to hone their considerable skills within that genre. Wax up your boards, fire up your Woodies and dig the beats of Winogrond and company!

Posted by Mark Pino On Drums at 8:15 AM No comments: