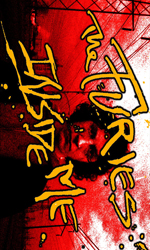 Pivoting away from Jaap Blonk's Dada moves now, Disaster Amnesiac finds myself immersed in the heavy as hell instrumental power trio dynamics of APR. Across nine tracks of guitar/bass/drums storming, The Furies Inside Me has drummer Bobby Previte leading the way with some of the fiercest playing that I recall hearing from him. He drives guitarist Peter Aaron and bass player John Rosenthal with a combination of Free Jazz stamina and Heavy Metal (just pick your subset of it, he's got 'em all down) precision. Disaster Amnesiac realizes that people have been doing this for decades now, but holy smokes does Previte have it down.
The string players answer fantastically with their scorching tones that blast from amps which sound seriously turned the fuck up. Aaron and Roshenthal are not holding back in the wake of Previte's pummel.
The Furies Inside Me contains the kind of instrumental music that demands and holds the attention of a listener with its metallic squalling and head over heels ensemble gallops: they're here for the delight of any fan of this kind of fused music.
I've not seen this film, but the playing from APR has me wondering how its images can compete with the fire that it its soundtrack; just like all great soundtracks, The Furies Inside Me stands up as an individual statement. Disaster Amnesiac is sitting here dreaming of APR doing a live gig with the film playing simultaneously. I guess it'd ruin any dialogue that the film might have, but this tape and its great sounds have convinced me to seek out some kind of home copy of it, anyway. How could it not rock as hard as this tape from eh?

Posted by Mark Pino On Drums at 5:15 PM No comments: 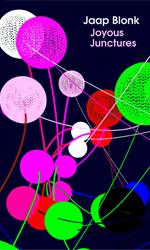 Recently at the high school where Disaster Amnesiac works, our World History class has been delving deeply into World War I. Along with marveling at just how much of a waste of people and resources that debacle was, I've also been thinking about how dada was really the only sane response to such an absolutely insane pursuit.
If you're thinking that Joyous Junctures, the recent cassette from Jaap Blonk on eh? Records, also has Disaster Amnesiac thinking about dada, you'd be right. The playful, willfully skewed nature of the music on this release is certainly worthy of the moniker. The ways with which Blonk bends computer sounds, voices, and tones from other sources has my mind pinned to the existential floor as
I imagine those that experienced the ontology emanating from Cabaret Voltaire must also have felt. Approached for a more linear vantage, Joyous Junctures may not do much for a listener, but if heard with a bit more of cyclic one, the songs on this cassette having the kind of surreal atmospheres and modes that really are delightful. Electronic squiggles merge with whirring and burbling tones. Metallic sounds scrape and trill. These then find themselves serving as the backdrop for vocal experimentation from both human and AI. Glossalalia and written texts are both found and explored by Blonk and his robots, sometimes within the same piece. It all adds up to an hour of delightfully odd, fun and often quite funny sounds.
If you're in need of escape from the every day mundane, Joyous Junctures will surely do the trick. Its dada will likely have you laughing and marveling simultaneously. It's art for the living, so spend some time living with it, human!

Posted by Mark Pino On Drums at 7:08 PM No comments: