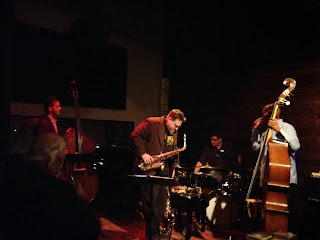 Disaster Amnesiac got to Oakland's Duende a bit early, at which time Rent Romus suggested "we're going to play some Jazz for you".
That they surely did, working from charts and building up heated improvisational crescendos (aside from one calm and cool Chico Freeman piece).  Their piece 6th St. Breakdown was particularly crazed.
Bassists Kim Cass and Markus Hunt lay down a thick low tandem, upon which drummer Timothy Orr spreads his percussive mastery and Rent blows his always stunning alto/soprano tones.
Life's Blood damn well rock their Jazz.
Below: Life's Blood marching in 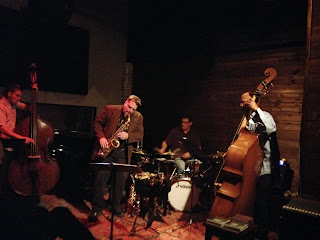 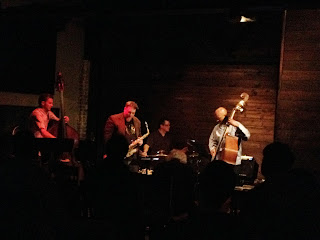 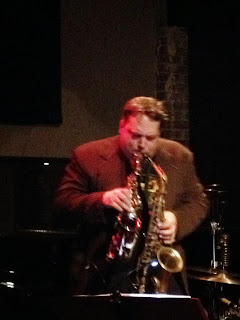 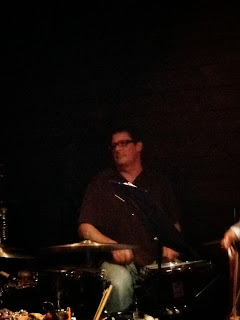 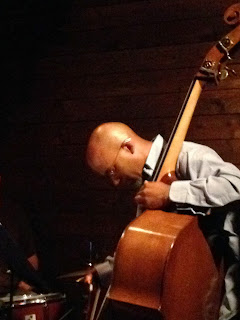 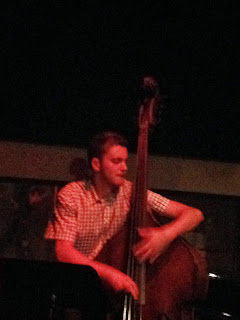 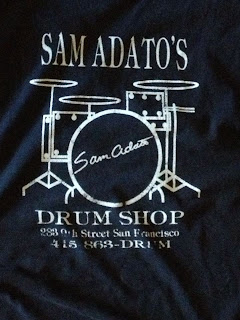 Last week Disaster Amnesiac spent an inordinate amount of time in San Francisco during after work hours. I had a chance to see a small slice of the burgeoning Bourgie look of the "new" Mission, along with the cha-cha new boutique that inhabits the space formerly utilized by Sam Adato's Drum Shop.
It was absolutely strange to feel that, walking along at 22nd and Mission, I was hearing conversations reminiscent of Melrose Ave. or Manhattan. Additionally, the immaculately scrubbed and primping people inhabiting that space are not familiar to Disaster Amnesiac. I won't deny them their right to pursue whatever it is that they feel is their right to life, liberty and happiness, but goddamn it's strange to have that feel so much on display in the Mission.
Likewise, it was odd to not see Sam's big blue banner at 9th and Howard. His shop was such a landmark for a wide cross section of musicians. I always loved going there. Sam had vintage posters of Ginger Baker and Black Sabbath on the walls, and he'd always have some great, pre-Punk Rock going on the stereo, provided that there wasn't a Giants game on. He sold all manner of drum gear; his "snare drum wall" was truly a thing of beauty. Sam had a deal with a local machinist, and could put rivets in cymbals or have a piece of vintage gear physically replicated flawlessly. He is also a friendly person, supportive of just about everyone. He gave me a ton of pointers about drum hardware, as I'm sure that he still does for others at his new shop in Eugene, OR. Somehow, I doubt that the new proprietors at 283 9th St. have quite the same vibe going.
Disaster Amnesiac has always tried to remain realistic about the  changes that happen in San Francisco and the Bay Area. I don't dismiss the fact that this area was built on speculation, that its principles are firmly rooted in boom and bust cycles. Still, the last week's forays into SF made it glaringly obvious that the changes are indifferent to me, too. I am humbled before this fact.
Posted by Mark Pino On Drums at 10:35 AM No comments: 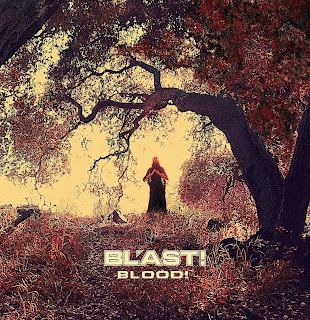 As Disaster Amnesiac has spent the last few days listening obsessively to Blood, Bl'ast's reissue of 1987 recordings, it strikes me that, at that time, they had assumed the mantle of high energy Rock band from Black Flag. You've gotta figure that if Greg had not heard something worthwhile in their twin guitar attack, he would never have bothered to bring them on board at SST Records. As I recall that time, most of the really energetic and creative Rock bands of that period were emerging from within Hardcore Punk, which was definitely the case for Bl'ast.I figure that SST got all kinds of demos from all over the Hardcore scene, and for some reason, they chose Bl'ast. SST's criteria for signing bands were first and foremost musical, as opposed to scene-based, and, as such, Bl'ast obviously passed the test and gained entry. Let's look at these musical merits, shall we?
First and foremost, Disaster Amnesiac would like to describe and enthuse about drummer Bill Torgerson. Some years back, I opined about Bill's SST cohort Jim Thompson of the Alter-Natives, describing him as like an over-caffeinated Tony Williams. Similar adjectives would suffice to describe Bill's playing on Blood in particular within Bl'ast in general. His hyper playing, characterized by fast paced rolling motion, sudden stops, and head over heels tom tom fills, moves the band's tunes with a manic energy. I'd say that his rhythmic conception is a ton less linear than his peers in that era; far from doing the Hardcore Polka beat, Bill is clearly after some inner vibe with his drumming. On occasion his meter wavers, but it's in that wavering that a lot of tension and release feeling is pumped into the tunes, giving added boost to the guitarists' manic energy as a result.
Ah, yes, the guitarists. The dual six string attack of Mike Neider and William Duvall packs such heavy punches throughout the album's eleven tracks. Neider's dramatic lead lines, so sweetly distorted, wend their way through the structures of the tunes while Duvall doubles them into a thick wall of sound. Bl'ast's guitar sounds strike this listener as being rooted as much in Iommi as they are in Ginn. They give off a kind of psychedelic shimmer along with their high end wails and thick, dark chords. Again, reflecting on that time period, Disaster Amnesiac thinks of groups like Void and Corrosion of Conformity, along with Black Flag, of course, as bands that were integrating Hardcore's over the top energy with older Rock's genuine heaviness. Bl'ast's sound fits nicely into that pocket, standing shoulder to shoulder with those great bands in those terms. Bassist Dave Cooper must have had his mind and hands full, what with all of that twelve-stringed din and spastic drumming, and he was clearly up to the task. His presence in the mix is somewhat negligible, but you've got to figure that the rest of the group absolutely depended upon him to keep the melodic lines going in stable rhythm. That era's bass players were definitely not recipients of much glory (well, except for maybe Larry Boothroyd); I can imagine Cooper feeling quietly proud of his prowess as the other instrumentalists in Bl'ast went-the-fuck-off!
Bl'ast lead singer Clifford Dinsmore has always reminded Disaster Amnesiac of a Hardcore Punk version of Apocalypse Now's goofy foot captain, played by Robert Duvall. You know, the "Charlie don't surf" guy, in the way he melds Cali surf cool with a military macho. Dinsmore's lyrics are pretty far removed from being desirous of military action though. They often seem to deal with the inner tensions stemming from reflections upon the impending doom of the planet, or the pains of betrayal within personal relationships. His gravelly Punk Rock delivery, inflected with Santa Cruz surfer drawl, barks them out on point of the rhythm section's alternately stuttering or full throttle changes. Clifford was and remains a unique front man. It's tough not to be effected by his barreling, compelling declamations.
Back in the early 1990's, Disaster Amnesiac paid some attention to Bl'ast's demise. It seemed to be that they were somewhat unfairly attacked and then hounded by the Elite of the Hardcore Scene, and I'm sure that this added to what was already a pretty high strung situation (judging from the intensity of the band's delivery and the low return tenor of those times for real Rock bands). It's really great to hear "new" versions of their tunes at decades' remove from all of the dorky psychodrama.  Their current web page shows shots of the re-vamped group, so hopefully some touring is in the works. Rest assured I'll be blasting my copies of Blood before and after any live appearances that the band may make.
Posted by Mark Pino On Drums at 1:09 PM No comments: