San Francisco strikes Disaster Amnesiac as a very precipitous for one pursuing a musical vision. I'd recommend Joe Carducci's musings on the City's music industry limitations as authoritative in many ways. From my own lived experience, the place is just too damn small, its Historical Aspirations attempting to cram themselves into a physical area with the size of a mere capital city or D.C. suburb. There's just so much pie from which to slice, see, and the competition for that sweet taste of success gets down and dirty (all with a smile, and hugs, of course). It's also an extremely easy place in which to get lost, mentally, emotionally, spiritually. Apparently it's ruled by Gemini, so one can't expect the same face to be speaking today as that which spoke yesterday or will speak tomorrow. A dreadlocked astrologer told me that on Church St. in 1995, anyway.
Additionally, well, many are called, and few are chosen. It sucks, but, yeah......

Lately, Disaster Amnesiac has been digging three finds from recent years, all of them sharing Ess Eff as the territory in which they were conceived and produced. None of them seem to be household names from our musical culture, but all three provide fascinating sound glimpses into some of the unheard, unknown, and musically very rich, bands of that 7X7 space. 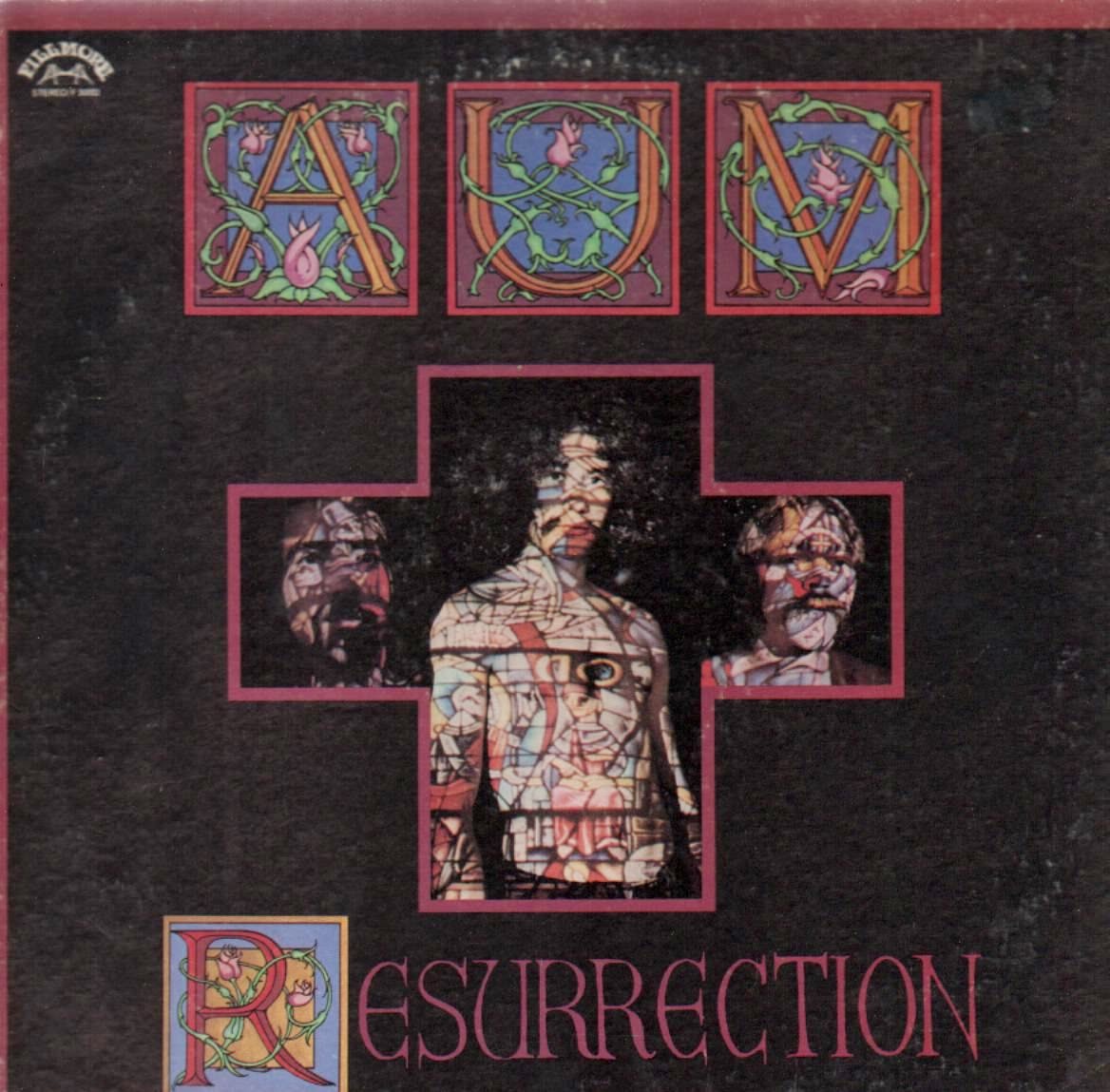 Aum-Resurrection; Fillmore Records, 1969
Per the title, this one definitely has a Jesus Freak vibe, especially album opener God Is Back In Town and the title track, but they keep things ecumenical with the Far Eastern sentiments of Aum. Resurrection is most definitely a spiritually inclined offering. Musically, Aum's sound was that of a tight power trio, less sloppy than Blue Cheer, not as pedantic as Cream, but cut from similar cloth. There are many fine moments of rockin' electric trio action here, particularly on Bye Bye Baby and Little Brown Hen. Along with that action, some of the factors that make the album really enjoyable for Disaster Amnesiac are the great, tom tom heavy pounding and focused cymbal tapping of drummer Larry Martin, the talented song craft of lead guitar/vocalist Wayne Ceballos, and the beautiful three part harmonies that are achieved when bassist Kenneth Newell joins in the singing. That latter aspect brings the great vocal groups of the 1950's to mind, and it's often lovely. I guess that this, Aum's second LP, flopped, and that they disbanded soon thereafter. Hopefully they were able to keep that spiritual uplift within their hearts as they transitioned into new phases of their lives. 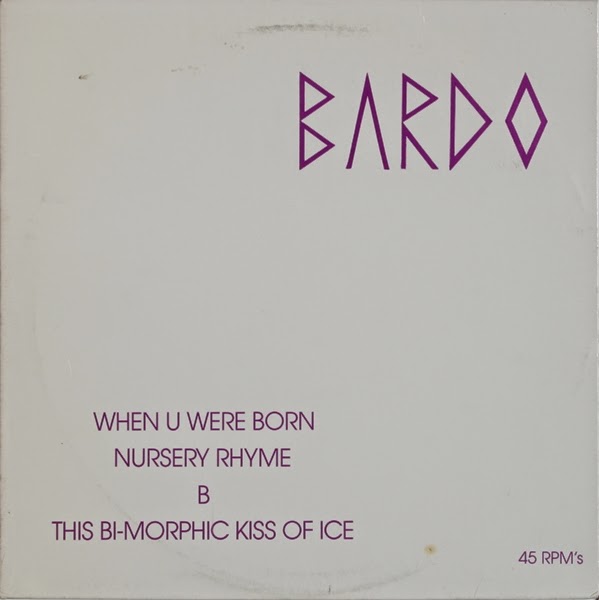 Bardo-When U Were Born; Odrab Records, 1987
Moving about fifteen years down the linear time stream, we have Bardo, a tripped out troop of S.F. Art Weirds, and their Funk-ed up, Jazz inflected Jump Rock. The sounds on When U Were Born's three tracks are pretty varied, as the band draws from many styles; the unifying element is pretty clearly the Pop Surrealist lyrics and vocals by F Dzeikan. He definitely sounds as if he draws from the Zappa School of Sardonic, at least as far as his written/sung thoughts are concerned. The band's rhythms are generally swift, funky, and solidly swinging, even after the abstracted ritual feel at the beginning of what sounds like it could have been the height of their live sets, This Bi-Morphic Kiss of Ice. Disaster Amnesiac would note that drummer Dave Mihaly is still playing live music in the City! The horn section of Annelise Zamula and Fritz Hansen (who looks a lot like John Cale!) does great Punk Funk work, while string men Eric Von Rippy on bass and Aldo Perez on guitar keep things frenetic on their ends of the plucked spectrum. Bardo's neo-Pagan, Dionysian party vibe could be compared to similar nation wide acts from that time (Bad Mutha Goose, Tar Babies), but their eccentric hedonistic touches scream out: San Francisco. 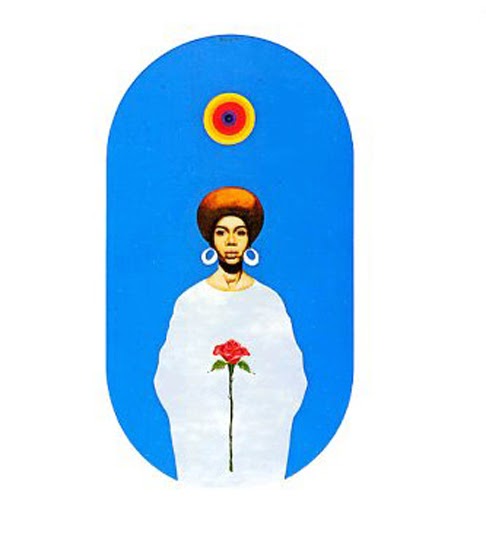 Luis Gasca-For Those Who Chant; Blue Thumb Records, 1971
Disaster Amnesiac figures it ain't exactly right, calling this one unheralded (at least the players here), seeing as that the cast is made up of many of the soon-to-be leading lights of the Fusion movement: Lenny White, Carlos Santana, Stanley Clark. George Cables, etc. That said, I had never heard of this LP until picking it up at a Victoria, B.C. antique shop. One might be forgiven if they thought it was some type of bootleg of the Miles Davis Bitches Brew band, as it most definitely has a similar sonic feel to that watershed Jazz event. Gasca's trumpet riffs and runs are a lot like those of Miles, but, what younger horn man at that time wasn't almost completely under the spell of the Dark Magus? His Latin Music inflections are clearly his own, though. Things get really S.F. sounding about half way through Street Dude, when a plethora of percussion and acid stoked chanting remind this listener of the Mission or the erstwhile drummers at Aquatic Park (hope they're still hanging out!). Spanish Gypsy deals out dark, mysterious Spiritual Jazz tarot cards for many minutes, with really fine rhythm guitar from Neil Schon and bumpin' grooves from Mike Shrieve and many other bateria. Late, great tenor man Joe Henderson adds his formidable tone and real Jazz gravitas, too; his solos give Chant the wandering sense of abandon and out that make for fascinating Jazz listening. The other guys in the band must have been floored as he did his thing in the studio!
This one has the most beautiful cover art of the three spun here, by far, that Fillmore Woman staring straight into the eyes of her beholder.

So there you have it, three somewhat obscure slices of San Francisco music. Disaster Amnesiac is still holding out on giving S.F.'s mighty Bomb similar treatment, but, hey, you never know! Until then, or some other spiel, remember to curb your dog and watch out for bicyclists.