Punk Rock singer Chris Thompson has been rolling aesthetic strikes for two decades now, so, of course Disaster Amnesiac was excited when reading about his most recent (and, sadly, done) band Coffin Pricks. Having listened to their 7", Group Home Haircut, as usual I am stoked about his personal metaphoric lyrics and spoke/sung technique on the mic. As regards the former, Disaster Amnesiac really digs the fact that Thompson seems to paint not from some stock anti-authoritarian Punk template, but more from a personal life perspective. I realize that I may be completely incorrect here, but, if so, still, the non-manifesto point of view never gets tiresome. As for the latter, it's so much more fun to listen to than the high pitched shouting that so many in post-Punk/Metal effect.  I find it very easily to relate to and enjoy his sound when I listen to him. His trademark delivery is fun to listen to.
Disaster Amnesiac always marvels at the ways in which bands led by Thompson can pull of a "stick to basic Punk" approach and never sound like hacks. That is probably not an easy task, and one can rest assured that with Chris at the helm, the band is likely to nail it. Rockin' rhythm section Ryan Weinstein on guitar, Jeff Rice on drums, and bassist Chay Lawrence conjure up a sound that's a mite tighter than Thompson's previous troupe, Red Eyed Legends, in that the hi-hats are more often closed, and the guitar chords muted a bit more. Still, their sound, drawing from Punk Rock from all eras (Stooges, Ramones, Pistols, Flag, D.C.H.C., Chi-tooled) clips along at a hot mid-to-fast pace, framing their singer's charismatic delivery with aplomb.
Group Home Haircut is a quick, compelling blast of Punk Rock-n-Roll. Will John Herndon's cool skull design on this 7"s cover become standard tattoo flash?
Posted by Mark Pino On Drums at 2:49 PM No comments:

Disaster Amnesiac has spent quite a bit of time in the last six months or so reading the writings of Walt Whitman. Although they clearly merit lifetimes of study, one dynamic that comes across quickly is the American Bard's love for people of all walks of life, and his desire for all citizens of this nation to shine their creative lights, for good of selves and country. Walt clearly wanted Americans to delve deeply within themselves, and to share robustly.

It often seems as if many Americans have forgotten, or perhaps never knew, the joy of being unique within society, of reveling in our particular individuality. Less so, even, the joy of creating, of speaking with a willfully unique and not self-censored voice, and working towards sharing it aloud. Disaster Amnesiac has been reveling recently in recordings by two very unique American Artists, by Jandek and Lonnie Holley. These two men have clearly made the journey within, and the American Insider perspectives are noteworthy. 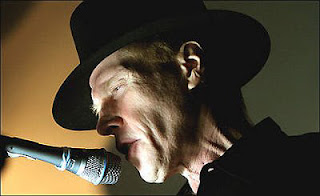 Jandek-Atlanta Saturday; Corwood Industries, 2012
It has been pretty fascinating to watch Jandek's emergence over the past near-decade, as he morphed from being a shadowy presence known only as a Houston p.o. box number to an international performer. His recent incarnations have had him taking on any number of musical styles, yet he's always managed to put his own unique stamp on all attempts. Disaster Amnesiac can attest to his amazing live show (Davis, CA11/12/10). Check him on youtube if you've not had a chance to be there in person. On Atlanta Saturday, the representative from Corwood leads a quartet of Seth Coon on bass clarinet, Ana Balka on violin, Kelly Shane on percussion, and himself on piano and vocals through an eight part suite of chamber-like pieces. The group's sound is delicate and, perhaps to the surprise of some who've cringed at Jandek's oeuvre, quite pretty. It is for the most part made up of sprightly modal forms from the leader's piano. At a certain point the group starts firing off Cecil Taylor Unit-like bursts, where Shane's percussion is particularly lively and great. Far from sounding like a Music Dept. exercise, as these kinds of experiments can sometimes end up doing, Saturday sounds earthy, real, and, dare I say, American, in no small part due to Jandek's conversational-styled delivery during lyrical passages. One wonders what Whitman would have made of his often surreal narrative, with lines such as "only a Fearless Fool would confront them ("the Guardians"). Disaster Amnesiac suspects that he would have approved. Something tells me that the Atlanta Academy of Medicine is lovely, as it surely brought some loveliness out of this quartet. 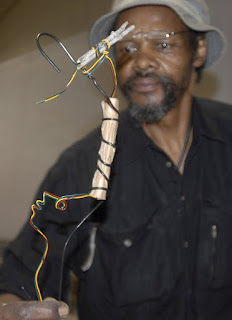 Lonnie Holley-Just Before Music; Dust to Digital, 2012
Disaster Amnesiac has been aware of prolific sculptor Lonnie Holley ever since reading The Last Folk Hero (it's a great read, find it!), but as far as I am aware, Just Before Music is his first musical release.Much like with his sculpture, Holley seems to use older materials (in this case, older synthesizers and keyboards) as a means toward articulating his vision. He keeps the accompaniment relatively simple, but the spacey, wide effect that he achieves within that simplicity is great.His keyboard work achieves a droning feel that supplements his lyrical descriptions of the America that he sees and feels, along with his soulful Southern croon. Holley's lyrical vision is very spiritually directed. Much like Whitman did with his words, Holley seems to want to use poetry to heal those around him. Fifth Child Burning, with its requiem for a young child, is particularly moving, as Holley seems to try to perform this healing on a being that has passed into the spirit realm. The America that Holley sees and describes is struggling with many problems, but he opines strongly that through art, poetry, and spirituality, it can heal itself and build upon the strength that it has gained through those struggles. Just Before is simultaneously lovely and harrowing, as all great poetry is. Hopefully it's not his only musical release. Kudos to Dust to Digital for their great packaging job, which reproduces Holley's lyrics in their entirety, along with great photo reproductions of some of his sculptural work.

Although Disaster Amnesiac's view of America is perhaps not as jaundiced as some others in this country, I know that it would be naive to say that we don't face serious issues and problems. Much like Whitman did, I feel that a possible solution for many of us would come from our finding the individual voices within ourselves, our vocation, the true, deep meaning within our lives. Men such as Jandek and Lonnie Holley have made the journey deep within themselves, and bring forth expressions of deeply spiritual/poetic nature. These types of expressions could possibly help to show others ways in which they could heal themselves and those around them. I contend that Walt would have been proud of these American Insiders, and hoped that others would follow their examples, for their own good and the greater good of our society.
Posted by Mark Pino On Drums at 9:49 AM No comments: