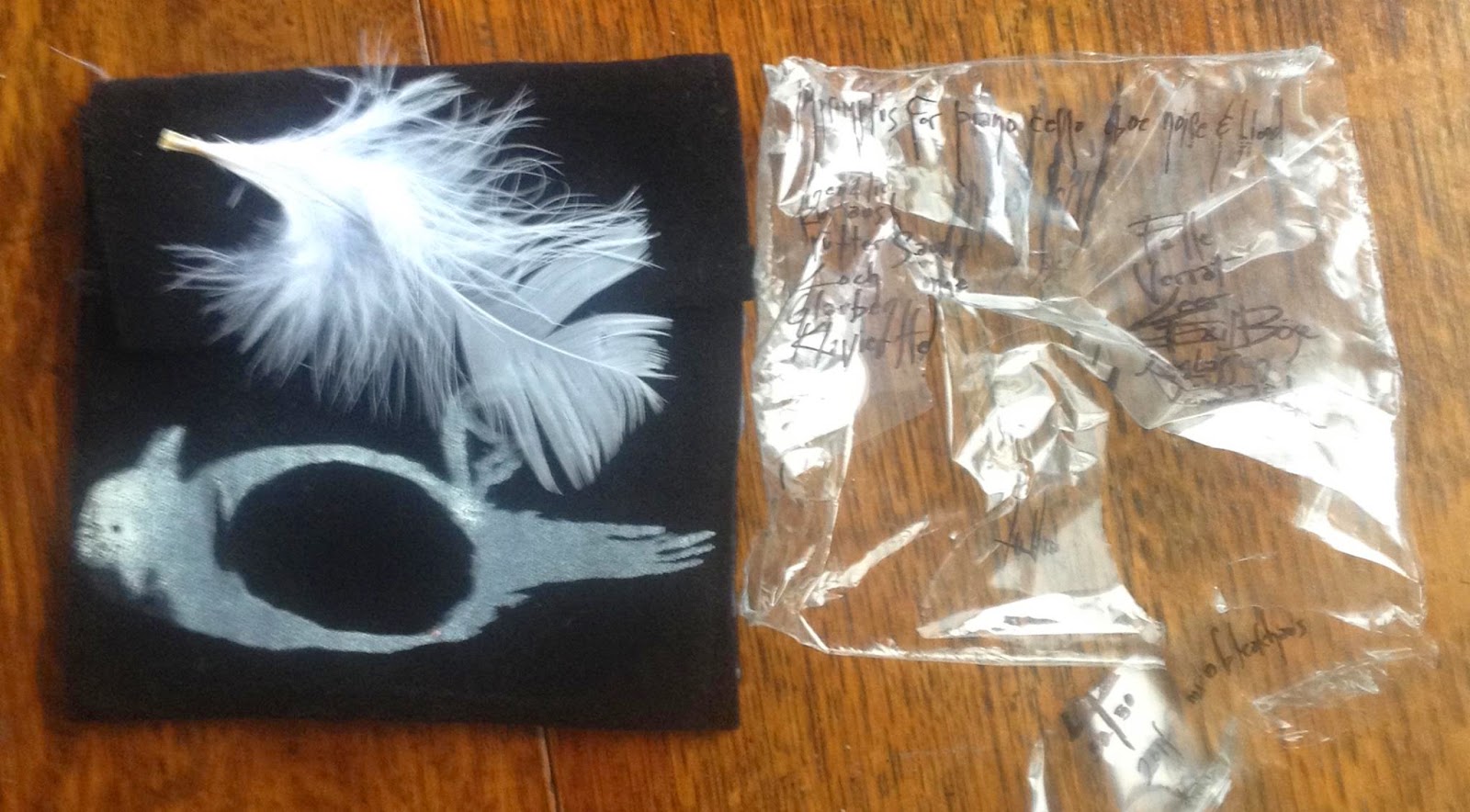 Disaster Amnesiac first experienced Deletist at this year's Nor Cal Noisefest. It was her mantra, "...I'm being STALKED by a CORPORATION..." repeated over a self-generated Ambient Noise Drone that initially blew this listener away. It seems like you'd be hard-pressed to find a better rumination on Late Capitalist life, at least the life lived as a "consumer". What person in the "developed world" could not at minimum understand, if not completely relate to that particular sentiment?
After said set, I made a bee line for her merch table and grabbed a copy of Disappearing (Impromptus for Piano Cello Oboe Noise & Blood). Mind you, this occurred in early October of this year, but it's taken some time to even get to listening to this disc, given the packaging. As you can see from the above picture, in order to even get to the music, one must tear through a tight and tricky layer of cellophane, meticulously hand-inked. This action, hell, even the consideration of this action, had Disaster Amnesiac feeling restless and upset, even. It seemed sort of a travesty to ruin such fine calligraphy! Needless to say, it took several weeks of consideration before this action was taken. I quite enjoyed what seemed to me to be a kind of Conceptual Art element to it. "Is it a comment upon human interaction? Does the ink represent the blood in the title? Is the ink actually blood?" These were just a few of my questions as I pondered getting to the music, and as I finally made the necessary tearing motion, there did feel to me to be a kind of "art moment". Is that pretentious? Frankly, I don't care, as it was an enjoyable and sublime (in the Kant-ian art-speak sense) moment, and, well, Disaster Amnesiac sort of lives for those. Thanks, Deletist.
Thanks, too, of course, for the great music that is encased by the black velvet and white feather underneath the (shr)ink wrap!

Disappearing features several pieces of moody Electro-Acoustic music, in which Deletist conjures up several deliciously darkened tracks. The pieces take their time, establishing drones as they unfold. Particularly striking is the live-on-air Rot aus Rauche, with its incessant cello grinding and the melancholy piano/electronics pairing of Loch, with its cold-crypt feel. Verrot continues in this vein, with cello and piano pairings, again, somber as hellish moods can be, yet somehow....uplifting, as is set closer Klein Liebe, made up of similar instrumentation. Exil Bose, with its Minimal drone and chanting, reminds this listener somewhat of Riley or LaMonte, but it's clear that Deletist most definitely has her own musical conception fully working. There are obviously many elements that make up the overall Deletist oeuvre. Disappearing is a great, moody piece of work, perfect for long, contemplative listening or background "work music". Either way, it's very effective.
During his introduction to Deletist's set at the Noisefest, MC Lob stated "...she's been making Noise for a long time", and that's obviously true. I'd say that Noise is one element of an entire, unique sound/conceptual/art world.
Posted by Mark Pino On Drums at 10:50 AM 2 comments: