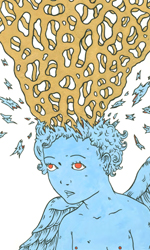 Hey there! It's been FAR too long since Disaster Amnesiac has posted anything. Suffice it to say, I've been very busy with other aspects of my life. That said, when Bryan Day comes a callin' with promo packages delivered to chez Amnesiac, I just have to get off of my butt and get to describing and enthusing.
This brings me to 2018's LA Blues, a righteous duo set of Free Improvisation from Patrick Shiroishi and Arturro Ibarra. Keying off of lessons learned from Japanese guitarist Masayuki Takayanagi, Shiroishi and Ibarra set down some seriously locked in interplay for alto sax and electric guitar.
Projection 8 sets the tone for the tape as the two wail and scream at all surrounding entities. It's very heavy, the way that their blasting tones leap right out of the gate, with zero letup for the duration. Upon first listen, Disaster Amnesiac was sure that the sax was a tenor, and this should show the raw power of Patrick's lungs! Arturo's guitar sounds wonderfully free of effects as he draws these giant chords from the strings.
Side A's second track, Projection 14, starts off with a bit more space being given between the players as they chatter together. Eventually the conversation picks up steam as Ibarra and Shiroishi ramp up the energy. This one is based upon Takayanagi's concept of "gradual projection", and its somewhat more stated minimalist elements definitely show. When they start throwing the tones around, though....worth the wait for any Free Jazz fan.
On the flip side, we get Projection 3, another gradual one on which Ibarra starts off with a cool line, over which Shiroishi floats some more of those lower notes on the alto. It's not long before the lines get more intertwined and the listener finds their ears following the fast ideas streaming forth, albeit in a slightly more restrained manner. Still, there's much sound to be digested as this duo gets down to the action of playing. A real sweet ending statement from Shiroisi, too.
Last up is another "mass projection", much like LA Blues' opening track, Projection 58. As the liner note describes it, it's "...marked by bombast, [and] intensity...." Ibarra and Shiroishi slam and tear at the air on this one, with the former sounding especially keyed in to some higher directive. The latter responds accordingly, and the result is a feast of energetic, storming Free Jazz that splatters and coats the brain with delicious sonic colors.
Let's face it, it takes some balls to call your release LA Blues. Putting your stuff on the level with the fabled Stooges skronk masterpiece should not be done lightly. Patrick Shiroishi and Artuo Ibarra rise to the challenge in ways that would surely put smiles on the faces of Steve Mackay and Ron Ashton. LA Blues delivers in much the same way as the song that it takes its name from did. Powerful stuff here.
Posted by Mark Pino On Drums at 10:33 AM No comments: