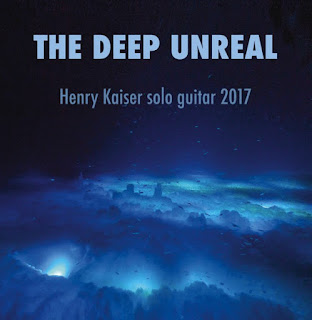 It was completely unexpected by Disaster Amnesiac to have come into a copy of Henry Kaiser's The Deep Unreal. I found myself being handed one by the man himself after a scheduling snafu had brought us into a brief bit of contact at an Oakland recording studio. The CD was quickly loaded into my listening rotation, and has been, much as I imagine Henry's views during his deep sea dives to be, full of odd and delightful surprises.
Opening track The Story Of My 2017 Austral Spring At The McMurdo Intake Jetty plunges the listener quite rapidly into Kaiser's personal ocean of sound, wherein he finger picks chiming single notes that drift atop currents of delayed drone figures. These sounds, per the liner note all improvised with no looping or overdubs, blend into a long form meditation of the guitar and its sonic possibilities. Kaiser's been playing for a long time now, and many of his approaches are at play here: glassy tones, 'plexed filigrees, quick runs along the strings, micro tonal zones and more. All of this coalesces into a piece that has felt both seductively relaxing and scarily intense to me as I've listened. It's a marvel to hear all of this real time sound organization as it blooms into and out of its beautiful moods and modes. Disaster Amnesiac has thought that it has the kind of "natural" feel that much instrumental music aspires to, the emotional depth that New Age music promised, the other worldliness that I've always wanted from Psychedelic music. Deep within this track is a kind of purity of playing which should serve as an inspiration to those with ears to hear it. Henry dives way deep.
Unreal's eponymous track kicks off with a bit more darkness than its predecessor while Kaiser continues to investigate the the areas into which his playing drifts. Don't panic though, as he's soon spinning those luminescent notes, clavichord-like in their timbre and pushed through some fascinating pedal processes. It's as if one were watching strange jellies and bubbles as they journey through some deep zone within the ocean of Terry Riley's brain. Disaster Amnesiac has sworn that I've heard a quote from My Favorite Things, to boot! The Deep Unreal does have the kind of raw openness of an elongated Coltrane jam, with the way in which the piece spirals ever more into itself, the music revealing more and more as it makes its way through time. Stunning technique throughout, but  one never gets the showing off vibe that can mar the work of certain shredders. This technique is sublimated to aesthetics, from which art emerges.
Never one to shy away from Blues, Kaiser plays a good one on A Spoonful Of Ice Death Blues. The delayed tones setting up a somewhat foreboding mood as the the finger picking dances atop. It's tough to believe that this track was recorded live, especially when a ripping solo begins to emerge from this initial interplay. I've listened to a fair amount of soloing from Henry, and this one ranks as probably the most effectively wiggy one. He goes off into a progression that is blasting and raw, yet chillingly smart as it melds intellect and emotion into a killer statement of what the guitar is capable of showing when in certain hands. Ice Death Blues leaves whomever are currently Kaiser's contemporaries in the dust as far as real expression within the Blues is concerned. Dig it and be blown away.
The CD ends with Henry picking up an acoustic guitar for First You Fall In Love With Antarctica-And Then It Breaks Your Heart. Here, he shows his Kottke/Fahey side in a sweetly melodic piece of American plucking. It's another piece of sheer beauty from his mind and fingers. Just gorgeous, and over quickly. Please pay attention and let your heart melt as you do so.
Mention must also be made of the sonic depth of The Deep Unreal. Disaster Amnesiac has noted that the tones on this disc, from low to high, are all so expertly captured. The former are speaker-shaking in their presence, and the latter are incredibly clear in theirs. No engineer is listed, so I'm assuming that Henry was charge of that aspect as well. Tape Op readers, take note!
The Deep Unreal is a masterful work from Henry Kaiser. Disaster Amnesiac can't say much more than that. You just gotta listen to it.

Posted by Mark Pino On Drums at 6:52 PM No comments: