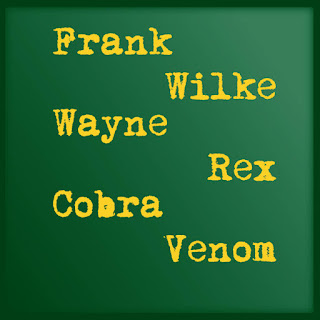 Why do you listen to music? Kind of rhetorical, yes, but while Disaster Amnesiac has been listening to Cobra Venom, Frank Wilke and Wayne Rex's 2018 release, the question has been on my mind. Ask me why, and I'll likely respond with my personal answer: to feel some sublime emotion or insight. Some people listen for other reasons, and that's fine, but the above stated is generally mine. I state this because I really thrilling upon the intimate interchanges from trumpeter/trombonist Wilke and drummer Rex that comprise the entirety of this release.
There is not a ton of showing off or grandstanding. Instead this duo sound as if they're having a deeply detailed conversation with their respective instruments, chatting back and forth with subtle details given great consideration as they converse. Tracks such as opener Cobra Venom, with its slow unfolding tom rolls and longer trumpet tones, the quickly paced Gold Flakes in Bed and Everyday Thermidor, and 83 Dogs and its inventive, swinging percussion (shades of Baby Dodds!) show two musicians who are formidably in sync with each others' playing.
Cobra Venom is the kind of improvisation recording that does not deliver fantastical displays of macho, but instead reaches out and invites the listener in to its deep focus and reflection. A great release of un-fussy, contemplative instrumental give and take from two musicians who seem to be making music for all of the right reasons, at least as far as this listener is concerned. Plenty of sublime within this fine release from Muteant Sounds.
Posted by Mark Pino On Drums at 4:52 PM No comments: