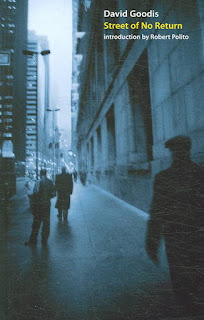 For the past few years, Disaster Amnesiac has been digging interviews and podcasts from an "alternative historian" whose view are quite challenging to mine. Within the spirit of free speech, and the desire to challenge certain orthodoxies that had begun to ossify within my perceptions, I have greatly appreciated this Youtube celebrity's spieling. Recently, he opined something to effect that "America has contributed NOTHING to world culture", and this assertion had me scratching my head, especially since I was deep into American writer David Goodis's 1954 novel Street Of No Return.
It seems to me that Noir writing's form, with its short, tight, descriptive sentences and bleak world views arose out of the necessity of describing the hard scrabble gauntlet that most Americans must indeed walk within our lives on this part of the continent. Street Of No Return definitely stays within those parameters, and masterfully so. Goodis's novel, the story of which essentially spans one long night in the life of a quintessentially 20th Century American Loser, is written with the economical, fast moving Noir style that gives voice to the constantly hustling American Masses. His pages-long description of main protagonist Whitey's beat down at the hands of a sadistic racketeer named Bertha struck this reader as a perfect metaphor for the myriad unpleasant turns that fate hands to so many people within the "American Dream".
Additionally, the sub plot of the novel, framed within a ginned-up race war, plotted and financed by unseen hands that couldn't care less about those doing the actual fighting, and only interested in the profitable chaos that stems from it, is clearly reflective of American culture. Sadly, that's a dynamic that's in play more within the 21st Century Global Culture, but the strange bedfellows that intertwine seem to Disaster Amnesiac to be singularly American. As such, Noir in general and Street Of No Return in particular  are deeply American, culturally.
Along with Jazz, Rock 'n Roll, Hip Hop, Bluegrass, Hollywood, and, indeed, Noir, America has indeed made a few innovations in culture. Disaster Amnesiac cannot say that they're all shining lights as compared to the innovations of various other World Historical societies. That said, novels such as Street Of No Return, which is a fine, fast, and really good read, give the lie to statements that would have American culture as one vast blank. Often dark? Yes. Blank? No, just churning within a firmament that we're all aware of, and trying desperately to rise above. 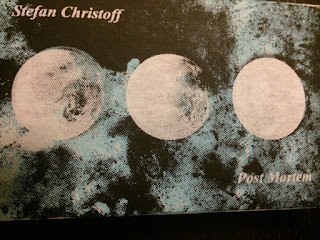 Fun Disaster Amnesiac fact: I currently work at a place that often involves young people screaming, crying, etc. As such, my musical tastes, especially during the afternoon automobile commute, are sometimes tending toward the "mellower" sides of the musical spectrum. I still consider myself a musically adventurous person, of course, but, some days the intensity of working with cognitively asymmetrical students has increased the desire for more placid sounds.
Thankfully, independent labels such as Italy's Old Bicycle Records are producing releases that satisfy both of these criteria. Take for example the recent split cassette release between Stefan Christoff and Post Mortem, Tape Crash #12.
Packaged within a beautifully silk screened wrap-around case, Tape Crash #12 features two sides of music that nicely fulfills both of the above stated needs.
Stefan Christoff's contribution on side A, recorded in Montreal in the years 2013-15, have him playing generally slow tempo, introspective works for solo guitar, organ, and piano. On piano pieces such as reve populaire a Montreal and piano in the atmosphere, his melodic approaches are emotionally charged and moving, seeming to hint at times at loneliness and possibly sadness, with touches of some kind of overcoming. Granted, these are just projections on Disaster Amnesiac's part, but they just have that sound of late-night piano ruminations that tend to evoke those types of feelings. His six string playing on correspondance has great High Plains, wind-swept strummings, and I really enjoy the slow pace of its movement. Perhaps Christoff's most experimental moves on Tape Crash occur during his organ pieces, fenetres sonores, with its backward sounding loops, and the 1960's-style Minimalism of organ rhythms under the rain, but even these two are plenty chill and meditative. Overall, Stafan's side is a fine fusion of relaxed, atmospheric playing and experimental questing. Disaster Amnesiac has found these sounds plenty soothing after tough days with challenging students.
On the B side of Tape Crash #12 can be found Dutch artist Jan Kees Helms, aka Post Mortem. His one long piece, Waasland, has a more musique concrete feel, with long, ambient sound washes, watery piano samples, strange, metallic-sounding percussion, floating voices, and the like. Waasland is certainly more on the more purely experimental side, but Disaster Amnesiac has found its tones to be equally calming. I suspect that this has much to do with Post Mortem's pacing: over the course of twenty three minutes, his sounds are never pushed hastily. Indeed, the mental impression that I have had is one of a dreamy river of sound that flows languidly past the perceptions. It may seem like a point belabored, but, again, this music provides plenty of mellow, yet compelling listening as Disaster Amnesiac has wended his way home during the work week.
A few years back, Disaster Amnesiac wanted to describe the music that fuses introspective, meditative vibes with the harder edges of the more purely experimental tones as "Blackened New Age". I don't know if the artists whose work is presented in Tape Crash #12 would be comfortable with, or even like that appellation, but it seems, in some ways, appropriate. I do know that their sounds are helping me to relax, while not boring me to tears, after long, generally stressful days within my particular zone of the "rat race". For that, I am grateful.

Posted by Mark Pino On Drums at 9:16 PM No comments: 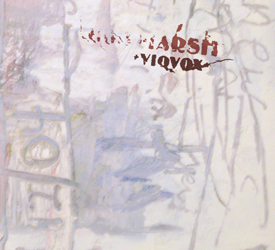 It seems as though conversations between creative/thoughtful/non-wealthy people in the San Francisco Bay Area increasingly feature an element of "where in the hell are we going to move once our landlord evicts us?". This has at least been the case for Disaster Amnesiac for the past couple of years. I hear about more and more people having to pack things up and leave the places that they'd been calling home; a move to entirely different city or state has been pretty often the case in these circumstances. The complicated property rights and human rights issued that these conversations touch upon are way beyond the scope of this humble blog, but, in this instance, I write about a friend's work, this friend having had to recently pull up stakes and leave the community within which he'd been working and thriving for several years.
Bob Marsh gifted Disaster Amnesiac a copy of Viovox at he and his partner, painter/percussionist Sandra Yolles', house during the first of their two moving potlatch events in late September of this year. He noticed me looking at it, and suggested that I take it and enjoy it.
Enjoy it, I certainly have!
The disc features Bob on spoken word, which he mixes with processed violin, cello, and sampled sounds.
Viovox has a very Avant-Garde, Experimental Music sound throughout, but is always imbued with the kind of human and intimate flavor that makes it quite pleasurable to hear. It never feels like a pointless exercise.
Marsh's raw, Punk Rock/Industrial feels on the stringed instruments definitely add to this property, as his playing style is indeed heavy, in the sense of it having physical impact. Bob does not coddle his instruments. Of course, this is not to say that he bashes them around either, it's just that, as one listens, one can feel their effects. It's this type of playing, rooted as much in Folk traditions as any 20th Century forms, that Bob always brings to his music.
Also within the Folk music matrix is the tradition of verbal information transmission. On pieces such as Rich Rule and Bring Out the Dead, Marsh achieves almost Medieval tones of narrative, while on Fuck It All and Calm Down his concerns seem more contemporary if equally "primal", even "alien" at times. Disaster Amnesiac has been marveling at the ways in which Bob effectively externalizes the internal dialogues that we are all going through. It strikes me that there is an element of autism or even insanity within these types of dialogues, and one of the highest functions of art is its ability to release these "demons"; on Viovox, Marsh sounds as if he is, in many ways, doing so, and inviting the active listener to participate in this process.
Mixed together, the twin elements of strings and voices blend richly in Viovox, providing for a fascinating, fun, and sometimes cathartic musical experience. Although challenging, it's never boring.
Bob and Sandy are now on their way east, searching for a new home in a more affordable area of the U.S. Any community in which they will reside will be better for their presence. Disaster Amnesiac is glad for any Bob Marsh recordings present in my musical library, especially since it will be challenging to see him, going forward.
Posted by Mark Pino On Drums at 7:11 PM No comments: