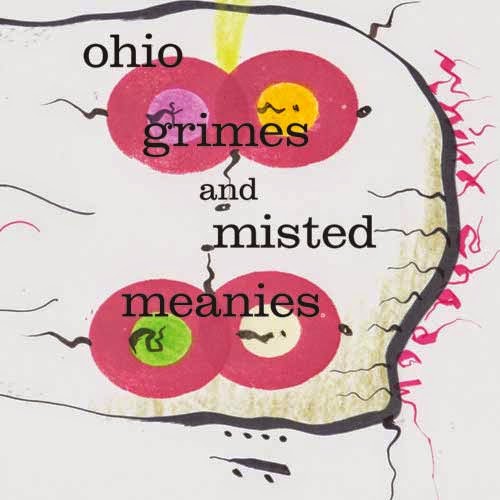 Recent party conversation with improvising dancer, musician, visual artist and all around shamanic community leader Bob Marsh regarding his show with Ben Bennett had him handing Ohio Grimes and Misted Meanies off to me with the suggestion that I try to review it. Often times, Disaster Amnesiac tends to balk at these kinds of suggestions (apologies to Bryan Day for the delays!), but I figured that a juicy, challenging gauntlet had been thrown. Of course, it helps that my admiration for Marsh's work continues to grow, and Bennett's solo work at Berkeley Arts Festival Building was mind blowing to me; that both appear on this disc pretty much sealed the deal as regards reviewing it.
Ohio Grimes features a quartet of Marsh, Bennett, Jack Wright, and John M. Bennett (the formerly mentioned Bennett's dad).
Bob briefly filled me in on the setting in which this 2010 was recorded, telling me of constant drone from Ohio State University Urban Arts Space's HVAC during the dog days of that year's summer. If one listens closely, it can indeed be heard. More worth hearing above the drone are the poetics of the elder Bennett, whose vocalizations veer back and forth between Spanish and English. Disaster Amnesiac finds the juxtaposition of the more Romantic lilt of the former with the utilitarian grit "...huh....huh?..." of the latter to be particularly fascinating. I wish that my grasp of Spanish was deeper. The language sounds beautiful rolling from his voice, pretty much every uttered phrase en Espanol has that feel. John often uses English to simply list things on his mind, but when he spins out phrases such as "...your name a floating crust...." or the surreal description of Throbbing Pencil, the poetic impact is solidly felt. There also seems to be a certain amount of dada effect, with some passages being uttered in a very Tzara-like way, their sounds taking precedent over their "meanings". Disaster Amnesiac also gets a perverse laugh every time the "...cheap jerk!" phrase is heard. I wonder who was being derided there? You just have to hear it, very funny. Great cover art by John, too!
Along with the  story of the unwanted a/c drone, Bob told me of pre-show drama in the form of misplaced instruments. It turns out that the electric guitar that he plays so adeptly was not the intended instrument for his piece in the quartet sound. No matter, though, as he coaxes all sort of chiming sounds from it. This, in tandem with Ben Bennett's intensively creative sound world of invented devices and Jack Wright's pointillist soprano and alto saxophone, has the group not so much grooving as throbbing. They move collectively from discrete zone to zone; often quieter, spaced passages, with stippled touch playing, give way to a kind of rising group dynamic, in which they achieve beautifully harsh, scrapyard dynamics or 20th Century Serious Music tones, before floating back to "listening" mode. The music always does a fine job of framing and commented upon the vocalized incantations. Not so much a group freak out as a kind of chamber chatter, the assembled group always sounds as if they're plugged in mentally to what each other are playing, hearing and responding in kind.
Disaster Amnesiac won't say that the Ohio Grimes and Misted Meanies challenge issued by Bob was a chore, but, as it is with all challenges met, I'm glad to have risen up to it. As usual, Edgetone Records offers up some fine Out Music with this one. Alright, whom can I pass the gauntlet to?

Posted by Mark Pino On Drums at 1:36 PM No comments:

ECM Records figures pretty prominently within Disaster Amnesiac's musical multi-verse. Due to my mother's taste in instrumental music, the first Jazz music that I can recall hearing was that of ECM artists such as Keith Jarrett and Pat Metheny. It may be that the label's aesthetics, the quality of the sounds pressed up onto vinyl, cassette, and compact disc rub some Jazz fans in a "wrong" way, but for this listener, that's just not the case.  The airy, mysterious engineering sounds of the music, and the open ended, simplified graphic sense of the label have always really moved my imagination. As such, I figured I'd spend some time digging a bit deeper into a few ECM joints and give the Disaster Amnesiac reportage to them. 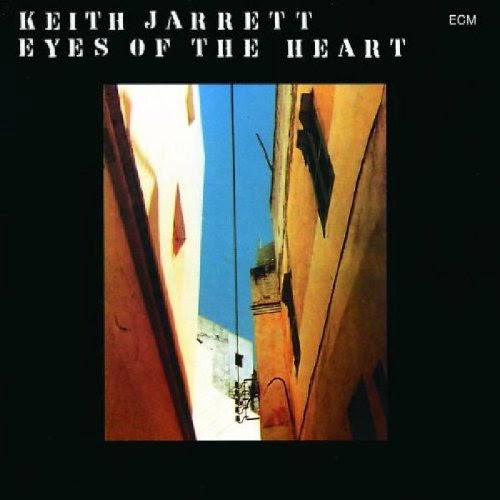 Keith Jarrett-Eyes of the Heart; ECM, 1979
Disaster Amnesiac figures that one key for listening to this 1976 live recording from Keith Jarrett and his American Quartet could be to divide it into two parts, despite its three disc vinyl waxing. Part One features three of said quartet, Jarrett, drummer Paul Motian, and bassist Charlie Haden; this trio of Jazz Masters starts things off with a ritualistic primitivo percussion/reeds jam, then moves into some stately Impressionistic piano Jazz and on into an almost march-like space, all of which are given same name as that of the LP. As mentioned, this is a top-flight Jazz group. That said, it's always been Motian's drumming that has excited this listener. His big, booming toms on the tribal action, his shimmering, stand-alone ride cymbal/snare drum syncopation and crisp press rolls during the marching motif; all of it compelling, airy in that classic ECM way, and creative. These dynamics seem like some the reasons music fans are attracted to Jazz, right? Naturally, Haden and Jarrett are no slouches themselves. The former matches up with Motian's drumming, using his equally robust bass sound to chatter with and comment upon all of that Zen drumming. Keith's piano playing is its usual lyric self, especially beautiful in the middle of the set, in which he explores with a plaintive, patient hand, wandering around the keys virtually unaccompanied for a while.
After over twenty minutes, Dewey Redman finally joins the rest of the group, initiating Part Two, and pretty much takes over, his solo action leading the piano into some feisty accompaniment as the bass and drums open up into their own free zones. The set then proceeds to the twinned euphoria and introspection of Encore, in which the group gets oddly funky and wigged out together before Jarrett makes a lonely closing statement to end the show. Dig on Motian's free flowing brush work during the former part; it's the sound of unchained revelry. Also great is the soprano/tenor duet between Redman and Jarrett, framed by Haden's countrified bass and more of Motian's blasting, all of which lead to the final piano solo. While Eyes of the Heart may not feature the overt fieriness of other Free Jazz releases to which it is contemporary, it is equally liberated and "out", just tempered with a bit more lyricism and restraint. That vibe fits it in well with the overall ECM aesthetic, of course: the label always seems to want to these two approaches into a unique new one. 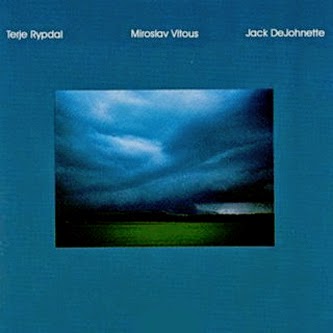 Terje Rypdal/Miroslav Vitous/Jack DeJohnette-Terje Rypdal/Miroslav Vitous/Jack DeJohnette; ECM 1979
Disaster Amnesiac always has a tough time figuring out where to shelve this one. I mean, who is the leader? Is it Miroslav, as his name's placed dead center? Or, is it Terje, as his name scans first, assuming that you're reading from a Western European vantage? Come to think of it, I'll always hear this one as Jack DeJohnette's lead, really. Starting with opener Sunrise, his absolutely dry cymbal work is all over this LP's moody songs. Naturally for Jack, his drums sound great, too, but, man, it's as if engineer Jan Erik Kongshaug decided "I want to get the perfect cymbal tones on this one." You really must hear it to fully appreciate what I'm saying. When he hits his snare drum, tom toms, an bass drum, it's more of a caress than a blow, but even within these subtleties on the drums, his cymbals reign supreme. Every hit of his cymbals is just so clear and clean. Vitous on bass does an exemplary job keeping up with Jack, with lyrical playing throughout, especially on Will, and the bowed atmospherics on Seasons. Guitarist Terje Rypdal wisely takes a subtle supporting role throughout the album. Disaster Amnesiac has recordings of him on which he wails, but herein he keeps somewhat to the background, using more of a textural approach with his guitar; it's almost as if he decided to frame all of the sublime interplay between the drums and bass with guitar coloration rather than outright displays of technique. Perhaps he wanted to avoid sounding too much like a certain Mahavishnu Orchestra dude, on who played with DeJohnette in Miles's bands? The strategy works, too. Rypdal's restraint works really nicely with all of the dry chatter within the rhythm section.
If one were to ask Disaster Amnesiac, "what album on ECM would you recommend as an entry point into the label?", I'd probably choose this one, but I'm not sure where in my stack I would find it at first. 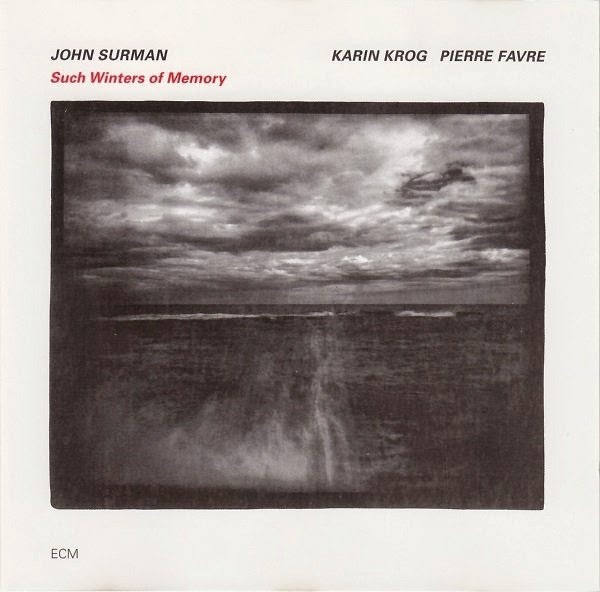 John Surman-Such Winters of Memory; ECM 1983
Last stop on the Disaster Amnesiac ECM sampler has us a few years down the line, 1983 to be exact, and label mainstay John Surman is holding court. On Such Winters of Memory, he is joined by Swiss precision percussionist Pierre Favre and Norwegian singer Karin Krog. Here we find yet another example of the abstract, widely spaced music that characterizes the label; Surman's rich, melodious baritone, piquant soprano, and reedy bass clarinet sounds leading the melodic way through their giant steppes. On tracks such as Sunday Morning and Seaside Postcard 1951, and On the Wing Again, there is also really great analog synthesizer programming that serves as a kind of futuristic drone. No matter how Favre plays, sparing or busy, there's always a sense of complete control within his syncopated action, and it's always responsive, in dialogue with the leader's voicing. Krog's vocals always give Disaster Amnesiac a kind of "high lonesome" feel, especially on the whimsical My Friend. Obviously not so much West Texas as Northern Scandinavian, but hopefully you get my drift. She scats abstract on Postcard, flows lyrical in On the Wing Again, putting a very unique, European spin on the consummate American art form of Jazz singing. Surman's (among so many millions of others'!) hero Coltrane gets a brief nod by way of a crystalline keyboard version of Expressions, after which the trio gets even more mystical on the raga form Mother of Light/Persepolis. Krog almost evokes Robert Plant at his most mystical here! Such Winters of Memory is a fine blending of influences from Surman, Krog, and Favre, within which several forms are fused into an imaginative whole. This is entirely in keeping with the ECM aesthetic, of course.

So there you have it, a few brief Disaster Amnesiac impressions from a scant few of ECM's massive catalog. I swear, their numbers must be approaching, or have even surpassed, the 1000 mark. Not bad for a genuinely independent label that puts out releases that aren't exactly easing listening, even for many Jazz listeners! As I was working on this post, I reflected on the sheer length of time that the label has existed. We're talking decades longer than like-minded ones such as Impulse! or ESP Disk. Dive in to it from one of the above, or any other portals, and discover myriad creative sound worlds for exploration!