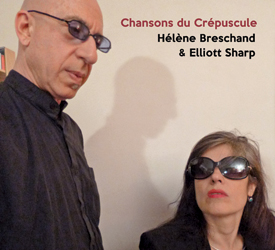 The last time that Disaster Amnesiac received a recording featuring Elliot Sharp from Public Eyesore, I balked, in many ways simply due to the seriousness with which Sharp is esteemed by me. Some context for that decision: here's an artist whose Larynx remained in the tape deck of my cars for years during the 1980's (the lettering actually rubbed completely off its casing over time), whose band Carbon, seen at the Kennel Club in 1992 or so, completely blew me away, whose interview with Mondo 2000 remains one of the definitive statements on Cyberpunk as culture. In short, Sharp's work over the years means a lot to me. Disaster Amnesiac is a huge fan of his. The thought of reviewing any work of his seems particularly daunting to me.
After an initial spin of Chansons du Crepuscule, Elliot's duo recording with French singer Helene Breschand, Disaster Amnesiac felt an immediate need to attempt to describe and enthuse. This new Public Eyesore product is so damn good, so illustrative of the twos' talents, I just had to dig in and type.
Things get off to a wild, spooky start with Extase. Right out of the gate, Breschand's vocals, presumably sung in French but sounding more Kobaiian to this listener, pair with cool fuzz tones from Sharp, riffed out in rhythmic trance form. No one gets credit for the great drum programming, which is equally fine. Helene's wild wailing carries the track to some pretty odd places, but any fan of Avant Garde singing will find lots to love within them.
Following up on the opening romp, La Langue Dans Ma Bouche and Je t'aime Tant feature more introspective moments. The former has great electronic burbling and mellow acoustic guitar strumming that frame vocals from both performers. On the latter, greasy slide guitar and swanky drum beats suggest Gainsbourg, but the lyrics seem to be a bit more Platonic than his legendary kink perspective. Breschand keeps up with the expressive vocal extends to great effect.
Next up we find Ne Lui Dis Rein, with more acoustic guitar and electronic loops being paired. The loops have cool, reedy timbres, while the guitar strings drop sonic dew drops among them. The lyrics are sung cool and sultry. This one exudes mystery throughout its relatively short duration. Rein is followed up by Goutte a Goutte, which continues showcasing Elliot's diverse guitar creativity. Here, he coaxes metallic industry sounds from an electric; he's been doing this for years now, but as Disaster Amnesiac has listened to this track, I've marveled at his singular aesthetic accomplishment with it. Sharp's got such a unique take on sound, and he practices it incredibly well. Helene hits emotional soprano tones on the song, pulling the sense upward as she does so.
All of the the previous action leads up to what, for me, is the high point of Crepuscule, a mind blowing version of the American Traditional classic The Cuckoo. Everything about this track, from Sharp's masterful guitar playing to his dusty baritone vocals and more of that crafty drumming blends with evocative mastery. This here's high art, and should be heard by anyone interested in creativity and aesthetic craft. Elliot Sharp has done so much, and Disaster Amnesiac has felt, listening to this track, that in many ways it's all lead to this track. If for no other reason, seek this disc out for it.
Breschand returns to the mic for the Eastern European Gypsy vibe of Amor, wherein the relative calm and beauty of the harp sounds gets exploded mid-song, one outburst framing its otherwise plaintive feel. The mournful zones gets quickly left behind with Le Bloque Cri, which again uses Elliot's electric guitar extensions and electronics for crazed sonic soundscape painting upon which Helene gets her Avant Ya Ya's out somewhat disturbingly. Sharp comments wryly in what sounds like some pretty fluent French, to boot.
Nouveau Monde has a European Art Music sound, with Sharp's sparse rhythm guitar sliding all around his partner's up and down the scale vocal performance. Elliot shines as an accompanying player here and Breschand shows more incredible range.
Chansons du Crepuscule ends on with the quiet tones of Le Dernier Mot, where both players use whispering, soft tones with guitar and voice, almost as if they're waving goodbye, and Chose Rose rounds the the disc out in simple spoke-sung duet mode, a final bit of surreal expression from these two masterful performers.
As mentioned, there are tons of reasons for any fan of creative music to seek out and enjoy the prodigious output of Elliot Sharp. Chansons du Crepuscule has more than a few itself. Disaster Amnesiac figures that, sadly, it isn't likely that this CD will be the breakout hit that it, in a sane world, should be, but, then again, Elliot and Helene Breschand probably couldn't care less about that. Undoubtedly, they'll continue in their quests for musical expression of the real and vital variety. Will they see you on their paths?
Posted by Mark Pino On Drums at 2:39 PM No comments: