Some Releases That Have Come My Way

It's been an admittedly slow year for Disaster Amnesiac. Life has gotten busier in some ways, and slowed down in others. Both of these dynamics have made it a bit more tough for me to feel the kind of mental focus needed for the pairing of listening with reviewing, but recently some releases have just sort of shown up. When this happens, I feel it to be a kind of necessity to try my utmost to do both. Here are some thoughts on these fine recordings. 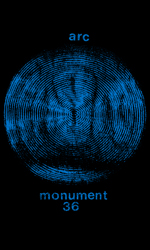 Arc-Monument 35; eh? Records casstte #100, 2019
Before the music even started, Disaster Amnesiac was enthralled by the lovely cover art for this cassette, along with the very mysterious vibes that it exudes. Just dig on that quavery orb! Inside the J-card, that opaqueness continues as four phases of the piece are listed, along with several of what appear to be initials of people that would appear to be "the 36". Definitely the kind of graphic design that I've always found to be quite compelling, as it leaves a ton to the imagination.
Imaginative as well is the music of Monument 36. For the most part, the sounds emerge from what could possibly be synths or laptops, calmly eddying out from their sources. Long form drones are established and occasionally seasoned by small percussive clanks and chord sounds, eventually joined by what I think are viola and bowed cymbals. The longer tones of Arc's playing blend into lovely, room filling waves that tend to freeze Disaster Amnesiac in place; I find my mind floating along within their contemplative, pulsing aural streams.
Monument 36, with its wide, quietly moving phases, has all of the qualities that make Minimalism such a cool approach when it is paired with attentive listening. Kudos as well for the stellar engineering here, from sound capture to mix to mastering. It sounds really well crafted on all of those fronts, too.
Put this tape on and allow yourself....to....drift...... 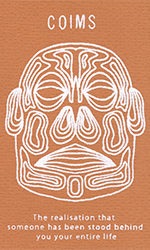 Coims-The Realisation That Someone Has Been Stood Behind You Your Entire Life; eh? Records cassette #111, 2019
What does Coims mean? Is it an acronym? A surname? Quite mysterious, as is just about everything else on The Realisation That Someone Has Been Stood Behind You Your Entire Life. When Disaster Amnesiac first took in the cover art, I was expecting some kind of tribal music or something, but was instead treated to four tracks of somewhat lo-fi Electro-Acoustic sounds. All kinds of instrumental interplay is at work on The Realisation.  Primitive synth tones merge with mic'd metals, feedback pulses drone and warble, drum machine beats get all glitchey, stringed instruments are plucked and processed, odd voices intone atop the din, and drum kits interact with squalls of electronics. It's a fantastic ride, notable for the very cool meshing of said elements into coherent pieces that do not fail to surprise the listener with their unexpected turns. Coims seem to be onto some kind of as yet unnamed Fusion music, and Disaster Amnesiac considers himself very much on board with it. They have taken the last 50 or so years of truly underground music and blended their elements into a singularly cool statement. Really fun, fine stuff here. 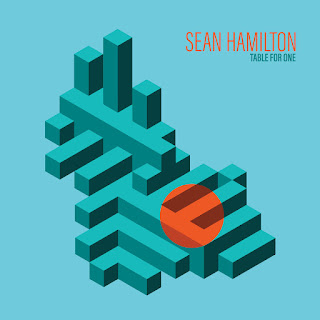 Sean Hamilton-Table For One; pfMentum Records, 2019
If Disaster Amnesiac could find a few more solo percussion recordings, Sean Hamilton's Table For One would certainly be part of a long overdue Up Half Known Roads installment. The peripatetic Hamilton is making his mark within the instrumental music underground with his astute solo percussion statements, of which Table is a fine example. Sean coaxes all kind of sounds from his drum set, which is often enhanced with what sound like small gongs for cool melodic effect. As I've listened, I've marveled at the pinpoint precision of the stick and mallet striking that goes on within the matrix of these compositions. Musical layers emerge from these kit pieces, and interspersed with them are quieter, more meditative actions that feature only one sound source, which set up the more frenetic ones nicely. Sean Hamilton is busy developing his unique solo percussion language, and fans of the genre should be delighted with Table For One. 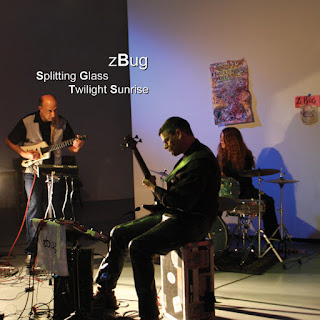 zBug-Splitting Glass/Twilight Sunrise; SoundToPeople Records, 2014
SF Bay Area stalwart improvisor David Leikam has had his band zBug going for quite a few years now. On a recent Sunday, Disaster Amnesiac was happy to catch their set at Temescal Arts Center in Oakland, at which time David graciously gave me a copy of Splitting Glass/Twilight Sunrise. What one gets on this CD is basically two versions of each of these titles: one full version and one that is edited. Smart move, really. Radio stations would probably be more inclined to jam the latter, while fans of improvised music would likely dig on the former just as much. And there is a whole lot of sound to dig. David gets really wild sounds out of his Moog and electric bass. He builds these huge walls of sound that are "based on architecture". The percussive vim of Sheila Bosco pushes the music forward with great energy, and guitarist Fred Malouf gets all manner of texture from his axe. Splitting Glass/Twilight Sunrise is a heavy blast of what Disaster Amnesiac keeps thinking of as Industrial Jazz as I've listened. Surely this term has been used before, but it definitely describes the sound of zBug. They're a band that packs a real whallop live, and David has bookings for 2020 set up. Get on out and support them! 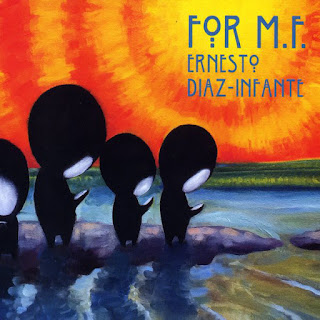 Ernesto Diaz-Infante-For M.F.; Pax Recordings, 2018
The deeper that Disaster Amnesiac goes into this post, the more it is realized that I could go on for a while, but you have my word that this will do it. Ernesto Diaz-Infante gave me a copy of For M.F. some months back at a bookstore in SF, and I've since marveled at the quiet control of this recording. Diaz-Infante spends about an hour getting very intimate with an acoustic guitar on For M.F., playing a quite minimal set of notes with intense focus. This is music that will surely put the listener into a moods of calm or even entrancement. I've driven with it on the car stereo, spent time puttering around the house to it, and have been blown away by its serene yet intense vibes. This is music that has all of the quiet majesty of, say, Indonesian Gamelan and the heaviness of any number of the current Drone Metal scene. All emanating from the fingers of one man man, mind you. And that cover art! Spooky!

In closing, Disaster Amnesiac wants to thank all of the artists who've supplied me with this music. You folks' music is loved and appreciated by me. I hope that this post will get a few more heads to feel the same way about it.