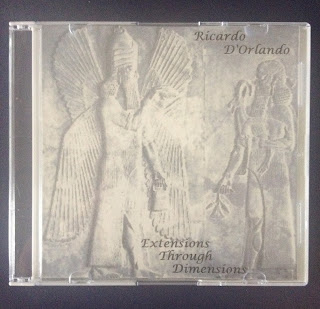 Over the years, Disaster Amnesiac has interacted with more than a few musicians, and perhaps one of the most humble of them is Ricardo D'Orlando. I met him at the Luggage Store in San Francisco, where he was doing a performance after driving all the way to California from his home base in New York City. Mind you, there were no other stops on this tour, save for a brief one in Los Angeles, where Ricardo stopped to check out some gear. Many musicians would likely be pretty perturbed by having to have traveled so far, especially in light of the somewhat small turnout for the show. Ricardo showed no negativity or frustration at all. He simply set up his synths and guitar amp, turned his rig on, and played a wonderful and spaced out set for his allotted forty five minutes, after which he packed his gear up, grabbed his car, and proceed to start the long trek back east. Pretty awesome, all of it.
Since that time, Disaster Amnesiac and Mr. D'Orlando have struck up a friendship on Facebook. A few weeks back, Ricardo let me know that a I should be expecting a package containing some of his music; the package has arrived, and I have been digging his solo disc, Extensions Through Dimensions, to start.
The disc features twenty three tracks of Cosmic Music, produced with the pretty much the same gear that I saw him use at the Luggage Store, and they all flow nicely together. There is a vaguely ritualistic feel to the overall sound, which pairs nicely with the ancient carvings featured on the disc's cover. D'Orlando sculpts as well, building up big clouds of sound that drift through the listener's perceptions as their action unfolds. There are linked sequences, such at the four part Antagonization, with its short statements; classically 20th Century Electronic Music moves on Robot Speaks; a canny remixing of Wagner's Tristan Und Isolde; harrowing heaviness on La Terra Trema; New Age feels on The Sacred Craft, and even emotional tenderness on Shala 1 and Shala 2. As any effective ritual should, Extensions Through Dimensions has varying and diverse movements.
It's these types of variation that Disaster Amnesiac finds really compelling about Extensions. When listening to this disc, I have found my mind going to all sorts of fascinating imaginary places; it's clear that Ricardo has put a lot of thought and care into his creative efforts.
I beseech you, the reader, to send some care his way, and listen to some of his music. He's surely put in the miles to warrant your attention.
Posted by Mark Pino On Drums at 10:08 AM No comments: 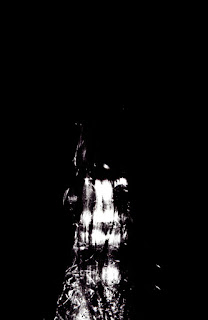 As Disaster Amnesiac has been listening to, and really digging al-khimiyya by Italian artist Hexn, I've also been digging back through certain key publications within my library, not the least of which being Andrea Juno's great mid-1990's interviews with women musical artists from the Pre-Punk, Punk, and Post-Punk years.
June Millington's quote, used to describe engineer Richard Perry, jumped out at me, its theme being synchronous with Hexn's stated goal of a "desire for alchemical knowledge" as arising from his musical matrix.
Hexn's playground would probably have to be designed by Edward Gorey or Tim Burton, as the release features a fantastically Goth vibe. Tracks such as Still Praying In the Middle of a Sun, Since Everything Was Anything, and A sacred Ring Around the Earth feature the kind of Bat Cave trance rhythms and vibes that would have just about any fan of that genre up and onto dimly lit dance floors world wide.
Still Praying features a wonderfully dramatic, icy synthesizer buildups that lead into really cool reverb drenched viola sounds, Since Everything features finely programmed down-tempo percussion, and A sacred Ring's doom-ey ritualistic vibe slithers into an awesome double time shuffle that would surely send any of its participants into a Dionysian ecstasy. These tunes are seriously tight, finely produced, and incredibly pleasurable to hear.
Further tracks such as Never Again Again Again, Now Then Black, and Eye are a bit more on the heavy Industrial side of the blackened Goth spectrum, with their sounds having a bit more of an experimental feel, perhaps a bit less dance-oriented and more of the head trip variety. One won't hear Disaster Amnesiac complain about those vibes, either! More really thoughtfully produced musical alchemy can be heard within these tracks, it's just that one may want to sit down with the eyes closed for them. Perhaps they're a bit more on the Apollonian side of the "as above so below" equation.
With al-khimiyya, Hexn has crafted a fine magickal vessel. It is surely a symbol of a sublimely attuned musical/alchemical soul. 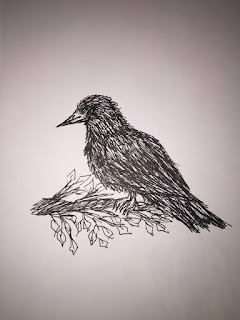 A few weeks back, Disaster Amnesiac got into a pretty interesting conversation with a local business owner about our mutual love of Jazz. He told me about his trips to Monterey and Montreal Jazz Fests, and I told him about the rich, vibrant Northern California underground scene. The look of incredulity that he gave me was both heartbreaking and instructive. Heartbreaking, because I realized that he just did not believe me when I told him about how many great Jazz/Improvisational musicians this area has, and instructive because, after thinking about the interaction, I realized how much work must be done to let Jazz fans about said scene.
One can't say that Ross Hammond isn't doing his share of this undertaking. Take a glance at his bandcamp page, and you'll surely get my drift. Along with showcasing his own work, he also runs the great Gold Lion Arts organization in Sacramento, where he organizes shows and puts on educational and art events. Ross is WORKIN'!
Working, too, is the sound of Mean Crow. This trio features Hammond on guitar, Luke Stewart on bass, and Nate Scheible on drums. Together, they explore some seriously deep Jazz and improvisational spaces.
The set, recorded in late 2014 in Washington D.C., starts off with some the group playing collectively long, arcing tones, with an almost Industrial Jazz feel, before spinning of into a typically heady solo from Hammond. Disaster Amnesiac has enjoyed the simple approach of his aesthetic, and the myriad voices that he coaxes from just strings, neck, pickups, and amp. Ross continues to grow his sound; from a quite simplified base, he manages to produce an overwhelming array of tones and moods. Stewart and and Scheible most definitely keep pace with him. Their tight rhythm section actions cooks, boils, whirls and blazes around the guitar speak, with big, plummy bass tones and quick sticking/foot action on the traps. Stunning trio action herein! The only quibble I have is that its side cuts off right as Ross seems to be delving into another great statement. Dude, frustrating!
Thankfully for the attentive listener, side two continues with their sublime trio dynamics, with some hot slide guitar action following after the initial bowed bass eloquence of Stewart's playing. Scheible also impresses mightily with his brush chops, which are quick but by no means un-present within the action. This leads back to more full trio Harmelodic conversation, the group back in all-out STUN mode as the tape concludes, Mean Crow walking the listener out the door with a seriously bangin', funky, aural kick in the ass.
I could go on and on: Mean Crow's release is the kind that begs for the moment by moment enthusing that characterizes many a music fan. Disaster Amnesiac will just advise: find it and listen to it! If you're at all interested in Jazz or improvised music, I promise that you won't be disappointed.
Would that guys like the business owner that I mentioned be able to acknowledge talented voices when they hear, or even hear about, them, regardless of their status. Disaster Amnesiac feels happy to be able to do so, as I am always happy to hear new sounds from Ross Hammond and his various groups.
Posted by Mark Pino On Drums at 7:02 PM No comments: