Thirty years post Hardcore and it feels safe to say that it was a Revolution that won. So many of its perspectives have seeped into the broader society, and this, in Disaster Amnesiac's mind, is a mixed blessing.
One downside of the mental conversion ushered in with Hardcore's Historical Triumph is the lack of story telling ability. So much post-Punk writing, while ostensibly packing the punch of "the Real", takes on a hectoring tone.
In smaller doses, fine.
Ultimately, however, there's only so much "I AM REAL" that can be dished out before the lack of other imaginary aspects becomes an impediment.
Eugene S. Robinson's Hardcore bona fides are undeniable. Do seek out the twisted recordings of Whipping Boy and Oxbow, or make time to see and hear the latter live for the visceral proof of that.
What's great about A Long Slow Screw is that, along with the sought after and attained physical impact that simplified writing can approximate when paired with attentive reading, Robinson, unlike many of his Hardcore peers, tells one hell of a powerful STORY.
Using 1970's Brooklyn as its gritty backdrop, A Long Slow Screw tells the tale of a heist gone wrong, with thorough attention given to illuminating the shit stained piston which drives the Hustle behind said heist.
Robinson uses a noir tone with which to tell the dark back stories of the novel's characters, who are roughly divided into those getting fucked and those doing the fucking. A more fundamental trait of Hardcore's narrative focus you'd be hard-pressed to find, and in that, the author remains true to his creative roots. It is within his character development and dialogue that he moves away from many of his peers' one dimensionality. As one reads the book, these characters and their intertwined stories come to life within the reader's imagination. It seems clear that Robinson spent a lot of time thinking about them.  The complexity of these characters and the richness of the book's  narrative voice and dialogue are way more compelling than the "right/wrong", "left/right", "I/them" of so much post-Punk aesthetics. Robinson is a writer, not a ranter, and this novel is well worth the time spent reading it. An attentive reader will find him or herself savoring many a passage, many a sharp turn of phrase.
Bonus coolness: as a physical object, A Long Slow Screw, with its sleek black cover and solid paper stock, has a weight not unlike the weights that Mr. Blue,  one of Robinson's more intriguing characters, hefts with such ease.
My only question is, is A Long Slow Screw to be followed by further descriptions of Jake and Easys' ice fueled plight?
Posted by Mark Pino On Drums at 4:38 PM No comments:

Hello America, or How Two Brits Sent a Love Letter to the American West

Just got home from seeing the movie Paul. It was a great comedy, referencing tons of classic Sci-fi, celluloid and print. The writers spared no one in their parodying, yet despite this there was never a sense of the identity-based approval or disapproval of selected sociological subcultures that one often senses coming from the film Class.
A very honest and, ultimately, loving portrait of  a kooky aspect of the American West by British writers Nick Frost and Simon Pegg.
Well done. Now, if you'll excuse me, I must be on my way...........................
Posted by Mark Pino On Drums at 9:16 PM No comments:

The Skull Defekts-Peer Amid (Thrill Jockey) 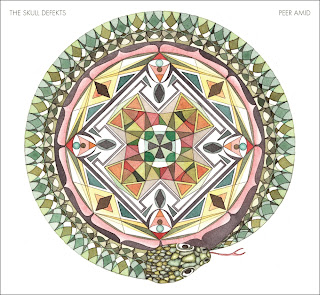 Life is full of surprises. Some good, some bad. The prolific output of Daniel Higgs is hardly a surprise anymore, but a new release in which he fronts an electric band? Indeed, that is a fine, fine surprise for Disaster Amnesiac.
After several years of listening to Higgs play banjo, mouth harp, small/toy percussion, etc. to accompany his mystical/meta-physical lyrics., along with visually feasting upon his many poetry and art books, it's a joy to hear him fronting a full band again. The former expressions are great and lasting, mind you; that said, Higgs has been such a riveting Rock front man, a unique vocalist and lyricist; his absence has been noted and felt within that sphere.
Daniel's vocal development of recent years is fully on display here. His alto registers have become more reedy in some sense, more weathered and aged. Think perhaps of Billy Holiday's later recordings. The qualities of Higg's voice have begun to take on the same sorts of qualities that Lady Day had toward the end: less physically strong, but all the more powerful for their necessary restraint. Along with these apparent qualities comes his recent characteristic evangelical-styled delivery. Lungfish lyrics always hinted at a religious aspect, and Higg's delivery likewise hinted thus. As also displayed on 2010's Say God, on Peer Amid Higgs goes there. Disaster Amnesiac lived for many years in an apartment in which his Grandma would warble old hymns as she accompanied herself on an out of tune piano; the overtly religious tone of some of Higg's lyrics are no bother to me. That said, in a post-Modern world, people may find this kind of earnestness quaint or even unsettling. That response is up to the individual, of course. For those who are repelled by overt evangelical tone of delivery, fear not, as for the most part the lyrics on Peer Amid, while being delivered with a preacher's urgency, remain ecumenical in their meta-physical/mystical subject matters.
It would be tough for a band to reach the high levels of focused minimalism that Lungfish did without ceasing to play altogether. To their credit, Skull Defekts provide great musical accompaniment  to Higgs. Their sound retains a lot of their earlier aesthetic, a big, post-1990's guitar band approach, but one can hear a significant pairing down, a la Lungfish. Whether this is due to Higg's presence or developments within Skull Defekts will have to be conjectured, but it's a welcome development either way. In comparison to Lungfish, the guitars of Joachim Nordwall and Daniel Fagerstroem are less locked-groove in approach, and more garage-ey in tone and style. The drumming of Henrik Rylander  has a more "big beat" feel, which seems to be in keeping with so many Scandinavian Rock drummers' rhythmic style. All comparisons aside, Skull Defekts sound on equal terms with Higgs, whether on more conventional tunes like No More Always and Gospel of the Skull or signature percussive experiments such as In Majestic Drag. This is, after all, Rock music, and at no time is there a feeling of "Daniel Higgs backed by the Skull Defekts". Even the appearance of Higgs on solo banjo and noise on the last track, Hidden Hymn, can not diminish this full band feel.
Peer Amid's mix is live and even, and in keeping with the collaborative Rock feel, the vocals never overpower the instrumental mix. Engineer Stefan Brainstrum did a fine job.
In the liner notes to his great CD collection, Monster, David Thomas recounts how Pere Ubu's Song of the Bailing Man was pressed to 45 rpm, in order to obtain higher fidelity from the vinyl. Peer Amid's vinyl edition shares that aspect of said Ubu LP, and this is an aspect noted at the Thrill Jockey web site. The sound is great. Another victory for the vinyl comeback, one would hope.
With great cover art by Swedish artist Frederik Söderberg, added to it's heavy sound, Peer Amid would undoubtedly make a great addition to any sound collector's archive. Now, if only this group would add some West Coast U.S. dates to their upcoming tour!
Posted by Mark Pino On Drums at 9:19 AM No comments: