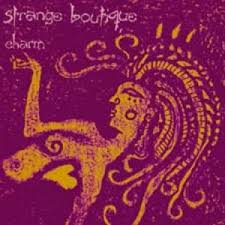 Teenage trips to Washington D.C. for shows at places like 9:30 Club, Hung Jury Pub, and D.C. Space made Disaster Amnesiac aware of the deep scene within the District. I'd see flyers and jacket art for groups such as Grey March, Troubled Gardens, and Madhouse and be intrigued.
Decades later, that's still the case, and, during a recent dig for cheap CD's (REAL buyer's market, kids), I found Strange Boutique's (basically Madhouse after a name change) great 1993 offering, Charm.
Fitting title too: for several days now, Disaster Amnesiac has indeed been charmed by its great playing, whimsical vibes, and just the overall gorgeousness of the tones contained on it.
Singer/lyricist Monica Richards leads the songs with a somewhat understated, at least by Goth terms, alto delivery. Her personal, poetic visions are sung in a way that provides drama and intrigue, but this listener never feels overwhelmed by it. Being somewhat aware of Richards' D.C. Hardcore pedigree up to that point, it makes sense to Disaster Amnesiac that she'd utilize this approach within the band. I hear echoes of said D.C.H.C, along with strains from its Revolution Summer descendant and hints of British Post-Punk. Songs such as Happy Birthday Wanda June, with its mashup of Doo-Wop and Spahn Ranch, Keep Them Still, which is based upon a Donne sonnet, and the mind-blowing Desert Rock vibes of Solar Friend are ample proof, both sound-wise and intellectually, of the deepness of her conception.
Strange Boutique guitarist Frederick E. Smith is well known to Disaster Amnesiac, seeing as that he was the lead guitarist in long-time favorite D.C. band Beefeater. His playing within the former group is a lot more textural oriented. His sounds on Charm provide shimmering colors and tones as they float around Richards' texts. Smith always struck me as a very band oriented player, in that his guitar melds deeply within the overall song structures. Within Charm, that's definitely the case. His repetitive riffing in Glaciers Down and acoustic strumming of Alekan Girl pair with great multi-track touches and subtle leads. His electric playing on Keep Them Still is beautifully shining, evoking rain storms and lightning. Excellent, understated six string artistry throughout this disc.
The rhythm section of Strange Boutique may be the coolest aspect for Disaster Amnesiac. I've often heard Goth/Death Rock groups that downplay rhythmic muscle and adeptness. Never sure why that's the case, but drummer Rand Blackwell and bassist Steve Willett play with a locked, lithe effectiveness that's quite cool to hear. Strange Boutique seems to have been a group that relied heavily upon the triplet feel; tunes such as Ears To the Ground, Happy Birthday Wanda June, and Hills Like White Elephants all cycle in threes. Even within this more waltz-like signature, Blackwell and Willett play with great Rock swagger and earthiness. Indeed, Willett's bass is pretty much the lead chordal voice throughout all of Charm. Blackwell drives it really effectively, with highly proficient cymbal strokes and clean tom tom set ups. His shamanic beating within A Ballad For Morgaine, a song that feels somewhat different, on account of its being from a different session than the rest of Charm's tracks, matches equally with the mysterious oration from Richards and the glistening sounds of the strings.
A brief Google search on Strange Boutique revealed that the band ended sometime in the mid-1990's, a victim of music biz indifference and performer burn out. Disaster Amnesiac is happy that they managed to document the eleven great tracks contained within Charm. If you're a fan of well produced and imagined Goth/Death Rock, you'll want to keep your eyes peeled for it when you're digging in crates or tuned in to Spotify. Very listenable charms from Strange Boutique.
Posted by Mark Pino On Drums at 7:00 PM 3 comments: