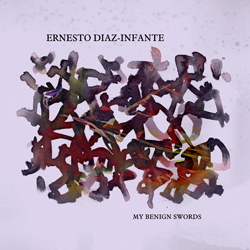 The other day Disaster Amnesiac got lost while driving around the the East Bay Hills near Richmond. As this was going on, I was quite happy to have My Benign Swords, Ernesto Diaz-Infante's new release playing on my car stereo. This, on account of how his adventurous guitar playing provided a mental frame of exploration and wonder, perfect for moving through unfamiliar areas.
The songs on Swords, all coaxed from a nylon stringed guitar, go to many fascinating sound worlds: percussive clanged notes on My Forgotten Stars and Where are you? Hope you're okay?, warbled stutters in Fear of Love, harmonic overtone sliding in Yin, and the floating, wide open spaces of Moving Away From My Mind (Disaster Amnesiac's fave track on the disc) and The Inside Answers. Across all of the disc's tracks, laid down "Next Door to the Jefferson Airplane Studios", and presented with really beautiful cover art, Diaz-Infante displays great control and creativity: he's got a vision and chops with which to achieve it.
My Benign Swords is a recording that near perfectly realizes the fusion of quiet, intimate ideas with challenging experimental moves, and, as such, is highly recommended to those that would get lost within such zones. Disaster Amnesiac should probably keep my copy in the car, as I do tend to get lost fairly often.

Posted by Mark Pino On Drums at 2:30 PM No comments: 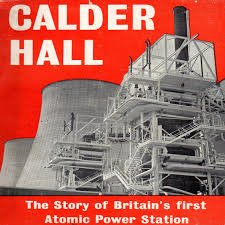 While it is not at all unusual for a piece of music to be produced in homage to some sort of "real life" event, place, or dynamic, one has to admit that music in homage to a nuclear reactor could be thought of as, quite possibly, rather odd.
Anyway, that was Disaster Amnesiac's impression upon reading of Reverb Worship's recent release of The Heartwood Institute's Calder Hall: The Story of Britain's First Atomic Power Station. An intriguing disc, it attempts to tell said story across eight instrumental electronic pieces of varied style. The arc of the tale begins with cool, chill tones of Heat Exchanger and Graphite Core, these two tones setting a calmly rational mood; it's almost as if they are musical analogs of the mechanical engineering process. The pace quickens within Diagrid's incessant, dancing beat and bouncy synthesizer lines, and then slows back down for the melancholy whir and buzz of Bepo (this one, like the short opening piece The Shape of Things To Come, also has narration from an anonymous BBC voice over announcer). Things get glassily surreal during Turbine House, which also features nice, subtle acoustic guitar and 1970's-sounding synth hits.
Calder Hall's short duration ends with two more pieces: first, the upbeat, melodic Control Room, featuring more great analog sounds and hard, primitive drum programming; this one is Disaster Amnesiac's favorite tune on the disc. It just really moves. Secondly, Cooling Towers, with its quiet, contemplative mood, wraps things up. As I've listened to Calder Hall, and read the disc's liner note, I can imagine this one being played as the facility was being shut down for the final time in 2003. Fitting ending sounds for this interesting concept.
Disaster Amnesiac cannot know if Calder Hall: The Story of Britain's First Atomic Power Station is coming from a place of actual reverence or black humor, but I do know that its sounds are creative and enjoyable in their mostly chilled-out electronic frames. This one's super limited, so, if you want to hear it, I'd say find Reverb Worship's online presence pretty quickly.

Posted by Mark Pino On Drums at 4:43 PM No comments: