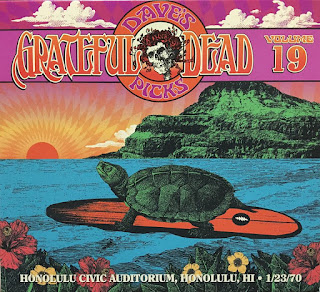 It's been a few years since Disaster Amnesiac has published a new Dave's Picks review, mostly on account of my having run out of things to say about the Grateful Dead. Not that I've stopped listening: at this point in my musical fandom, that just won't happen. Certain of these archival releases have left me a bit cold, but after several spins of the most recent in the series, Dave's Picks 19, I just had to try to describe and enthuse a bit.
In the main, what prompted this review is the way in which this show features the Dead at one of those sublime, transitional moments, when the listener can hear the peak feel of their then-current creative incarnation while simultaneously hearing hints of newly emergent aesthetic, as well as refinements of past visions. This feeling is all over DP 19.
For starters, the January 1970 recording date of these shows places the band at the tail end of their psychedelic ranger period, and key tunes from this era, Dark Star, St. Stephen, and Turn On Your Lovelight were all given incredible treatment that day in Honolulu. Dark Star runs the gamut from abstractly spaced to sweetly melodic, definitely pointing the way from the lysergic maelstrom of the late 1960's ballroom era versions of the song to the early 1970's theater show nuance and joy. St. Stephen is tightly played, heavily grooved from the Kreutzmann/Hart drum section and sprayed quicksilver from Garcia's Stratocaster. Also lovely is the way in which Lesh steers the ending jam of into the rowdy Pigpen vibes of Lovelight. While nowhere near as raunchy as the St. Louis recording of same on a Dave's Picks from a few years, back, this version gets odd as Pig duets with what sounds to be some newly acquired pal. His usual psycho-sexual Blues shamanism is well on display, too, naturally. These three tunes, making up an entire disc of the DP 19, are all highlight examples of tunes that, for better or worse, the Dead were soon to begin moving away from. Disaster Amnesiac recalls an interview with Garcia in which he mentioned how they'd run out of musical options for Dark Star, how they'd "played" it, and these tracks bear proof of that.
Invisible time travelers from the future to that era needn't have worried, however, for even as the band was "perfecting" their 1969 standards, they were also rolling out the new "Americana" tunes that would set the tones for the early-mid 1970's. A loping, jolly Dire Wolf, heavy, emotional Black Peter (2 times) with fabulous ensemble playing at the "...see here..." bridge section, and tight, rollicking Cumberland Blues are all rolled out; Jerry even seems to like Mason's Children (admit it, those lyrics are pretty dorky!) enough to shred out some of that fine, sublimely flawed pickin' of his at the ending jam of that short lived song.  According to the liner notes, New Music dude and Phriend of Phil, Tom Constanten, is featured on DP 19 playing some of his last shows with the band, as his approach would not be useful within the new, somewhat rural vibes, but, still, he sounds as great on these tunes as he does on the 1969 oeuvre. Disaster Amnesiac wonders if there will ever be a Dave's Picks that features a full show with Ned Lagin, but that's another thread for another time.
As far as echoes of older Dead iterations, a gritty guitar performance of Cold Rain And Snow, more ensemble tightness from disc opener China Cat Sunflower/I Know You Rider, and an even grittier I'm A King Bee all hark back to the initial Psychedelic San Francisco scene from which they gained national prominence; all are great, but the real treat is the phenomenal That's It For The Other One, during which Bob Weir shows his then emerging front man skills, and the band shows all of the gestalt tightness that their fans love. It's seriously nuanced, with all kinds of interactions between all of the players. Primal Dead at its highest level of out/in jamming. Stunning.
It's occurred to Disaster Amnesiac that as I've been typing this latest screed, I could just go track by track on Dave's Picks 19. Each track has tons of sounds to love. There ain't exactly time for that, but I will say to any and all Deadheads or Grateful Dead fans: seek this one out. It's got everything that you've grown to love about the Dead. Easily one of my top five archival recordings of Jerry, Pig, and the boys. 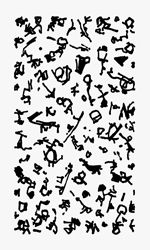 As promised in a recent private message, Public Eyesore/eh? head honcho Bryan Day has made some more recordings available to Disaster Amnesiac; it looks like he's ramping up production again! I'm happy and honored to be the recipient of so much great sound and music from the label.
It may be that I'm going out of sequence here, but the Leonard/Day/Jerman tape, Isinglass, had my immediate attention. Anything with Cheryl's deeply aesthetic organic/electric hybrids grabs Disaster Amnesiac pretty hastily.
Across seven pieces, put to tape over one year's time, this trio concocts soundscapes of deep, very organic nature. As I've listened, what at first sound like big slabs of sound reveal these great crenellations and nooks, small pockets to be delved into and investigated. One gets the sense that Leonard, Day, and Jeph Jerman put a lot of effort into letting the pieces unfold at within their own pace. Leonard's sound processes seem to act as guides, walking point into the exploratory auditory zones, while Day's invented instruments give some tonal and percussive action and Jerman's household objects color and comment. Disaster Amnesiac's favorite piece has to be the cassette's side one closer, during which feedback sounds jet out from the slow moving maelstrom. Among the other pieces, there are also fun sounds from bottles touching, strange whistles from who knows what, and all manner of curious tones, meshed together with a kind of delicate forcefulness.
Disaster Amnesiac would advise the potential listener to don headphones for listening to Isinglass. Though calm on its face, the sounds that this trio makes have the deeply moving impact of massed mental glaciers or tsunami, oozing into the listener's perceptions with wide strokes that reveal hidden bits to be savored for their subtle surprises.

Posted by Mark Pino On Drums at 5:28 PM No comments: