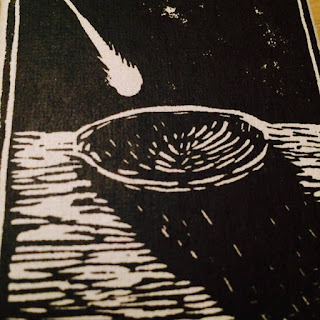 This one was off of Disaster Amnesiac's radar for a while, but it recently floated back up to the top of the cassette tape milk cart that occupies a corner of my media room. Glad to have had that happen, too, as I'd forgotten about the cool sounds of this tape.
Gelba's side features three tracks of murky, mysterious drones. These numbers make Disaster Amnesiac think of subterranean insect hives or deep earth caves. Their dark, somewhat subdued chattering, pulled from synth, guitar, tape delays, and loops unfold with quiet persistence, can feel rather unsettling at times. Much like many of the other releases that have come my way of late, there's an Electro-Acoustic Industrial feel to them. Gelba's duo of Matteo Poggi and Michele Mazzani surely display the interactive dynamics that have also been described, making their Industrial Music not so much about jackhammer rhythms (nothing of the sort happens at all during these tracks), instead giving forth sliding zones that fade into and out of the listener's consciousness. Gelba definitely are making some Trip Metal.
The venerable My Cat Is An Alien's side-long track, The Revenge of the Fallen Star, starts off with a high pitch drone which takes its time building into a mesh of wordless vocals, chiming electronics and percussion and layers of other more discrete sounds. This track has a more Science Fiction feel than its companion on the other side of the tape, its alien vibes feeling distinctly less earthy and more extra-terrestrial. Despite featuring passages that distort, these are cited as being "wholly intentional and...integral", and the whole thing has a relaxing, meditative Music of the Spheres feel to it. Clearly, My Cat Is An Alien's origin is on a friendly planet. The brothers Maurizio and Roberto Opalio have been honing their craft for a long time, and the experience is quite evident on Tape Crash #15. Incredible Cosmic Drift Tones from Turin!
If recalled correctly, Tape Crash has ceased being a working label, but the discerning Psychedelic Music fan can easily find plenty of great archival stuff at their Bandcamp page. Tons of great stuff can still be found there.

Posted by Mark Pino On Drums at 7:26 PM No comments: