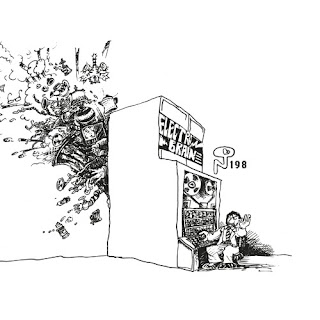 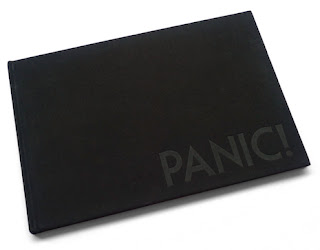 It took a day, maybe two, for Disaster Amnesiac to splurge on Ryebread Rodeo's great new hardbound book, Panic!, upon hearing of its release. Being a huge fan of Black Flag and pretty much anything SST and Greg Ginn related, there really wasn't much choice for me. Kinda HAD to have it. I figure that's the case for many out there, and they'll surely enjoy the photos of Hermosa Beach based Punk Rock group Panic!, a few months before they'd morph into being Black Flag. Robo looking half naked and totally feral, Keith holding onto a can of cheap beer for dear life, Chuck looking every bit the philosophy professor gone Col. Kurz, Greg with his piercing stare and lanky frame. The four of them rehearsing in their padded cell (I've marveled at how clean it looks!) and goofing off inside of what I think is the fabled Church, posing dangerously, while being double exposed, on Aviation Blvd., sitting in Keith's car (there's that brewski again, too). Also of note are the rough, naturalistic backgrounds that show Los Angeles in 1978. One can almost feel the grit and smell the exhaust coming off of the contact sheets.
The most instructive takeaway for Disaster Amnesiac, though, has been the repro'd contract with Bomp! Records. After reading it, I was struck by the "in perpetuity" clause mentioned. Is it painting with too broad a brush to suggest that this clause in some sense was the seed for the underground, do it yourself ethos which Black Flag would pioneer?
Dig: Disaster Amnesiac has been trying to imagine the conversation between Ginn and...who? His inner voice? Dukowski? Regis? In which, he saw that some other entity would own his vision for ever. For me, it's fascinating to ponder this, and the final decision to jettison the Bomp! plan and go completely independent. It seems likely that, had Panic! been signed to Bomp!, they would have put out a few 7 inches, maybe a 12 inch, and withered upon the vine of their boutique aesthetic. As we all know, Black Flag took over their own destiny (or, at least made a bold attempt to do so), got that first single out, and proceeded to carve out a tour circuit that is still extant into the 21st Century. Granted, this is pretty speculative statement, but it seems logical from where I sit. From a historical perspective, the contract is really the most compelling piece in the Panic! book for me.
Anyone interested in SST Records, or Black Flag, or Los Angeles, will likely spend a ton of time with it, should they grasp a copy of Panic! It does not feel as seminal a description of them as, say, Enter Naomi, but they most definitely expose some heretofore obscured views of the very important cultural achievement that they represent.

Posted by Mark Pino On Drums at 4:57 PM No comments: 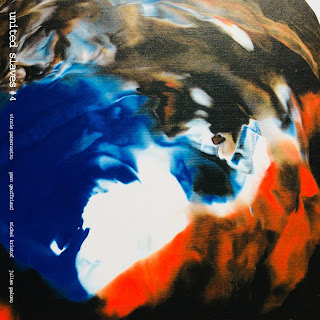 The releases are coming fast and furious from Muteant Sounds, so much so that Disaster Amnesiac is having a bit of trouble keeping up with them! It certainly is a pleasure to attempt to do so, of course, especially when releases such as United Slaves Live in Paris, from the quartet known as United Slaves, comes forth through the 'net.
Consisting of one continuous forty minute blast of heady improvisation, Live in Paris hits several different musical zones as it evolves. It starts out with a few minutes of droning, burbling electronics from Julien Palomo's ARP 2600. Upon hearing this initial passage, I was thinking that the entire set would be a meditation of a mellower sort, but as Michel Kristof on guitar, Yann Geoffriaud on drums, and Vinne Pasternostro on sax join in, it became clear that this set would be leading to a lot more wildly energetic areas. The quartet dives into some seriously thickened sonic interaction, with every voice adding their piece to the collective maelstrom that is conjured. Things settle down for a bit before Geoffriaud's rolling tom tom patterns guide Pasternostro, Kristof, and Palomo back up and out into Stooges level trance energy displays. It's within the mid-to late set times that the full force of United Slaves reveals itself, and it's a powerful improvisational force at that. Disaster Amnesiac has been swooning at the precision polyrhythms of Geoffriaud as it combines with Kristof's equally on point guitar stun attack and Pasternostro's spiritually uplifting tenor wailing. Palomo colors within and beyond his compatriots' collective matrix, sending whirling spirals this way and that.
All throughout Live in Paris, I hear many influences as play: Experimental Lab Music, Free Improvisation, Jazz in all its guises, Heavy Metal. Within the Slaves' hands they are all grasped and wrung into a very effective set of their unique sonic head cleaning praxis.
I couldn't care less what sounds others are listening to, but, if Disaster Amnesiac had to present an example of fiery, freely improvised music to a non-clued in listener, I'd seriously consider United Slaves Live in Paris as that example. It's raw, real, and very, all very exciting. Head on over to Muteant Sounds, and tell 'em I sent you.

Posted by Mark Pino On Drums at 5:11 PM No comments: