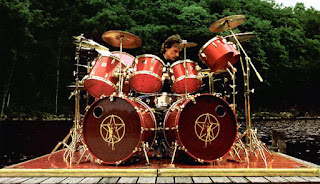 As news broke about the passing of Rush drummer/lyricist Neal Peart, Disaster Amnesiac felt content to sit back and just watch. I was amazed at the amount of tributes and mentions that I saw. The freaking Drudge Report even gave a link to his obituary! People that I never figured to be Rush fans of any sort were posting mentions on social media, along with, naturally, the very heartfelt words from those that were lifelong fans of the man and his band. Disaster Amnesiac has been reflecting for a few days on the matter. For one thing, I want to say right off the bat that Moving Pictures, and especially its drumming, is a stone PERFECT Rock album. Everything about it is flawless. Rush scaled to the highest summit therein, and rightfully stayed there for the next 35 years, selling out huge tours while always evolving in the manners of their own choosing. I'd like to posit that Peart's societal and cultural influence going forward may come more from his words than his drumming. Hear me out: the Disaster Amnesiac sees it, there are millions of people whose formative adult philosophical influence came not from a church or some Greek or German dude in an ivory tower. No, these millions where hugely influenced by the writings of Neal Peart, and most of them are not playing the drums or any other musical instrument.  At this point in time, these millions are in positions of responsibility and influence at all levels of our society, whether they're parenting, teaching, or running civil or corporate institutions. We are, in many ways, a culture of Tom Sawyers, and Disaster Amnesiac finds this fact fascinating.
Ride easy, Neal Peart. You did things in exactly the way that you intended to, and your influence will be felt for decades to come.
Posted by Mark Pino On Drums at 6:26 PM No comments: