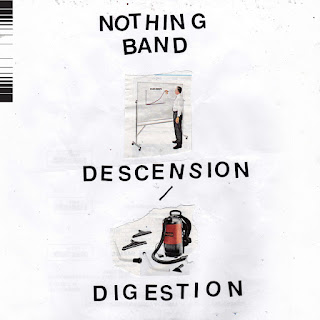 If you've to it, flaunt it, and if by "it" you mean a determinedly d.i.y. ethic paired with personalized aesthetic prowess, then Oakland California based musician and artist Max Nordile certainly does. Over the past three or four years, Disaster Amnesiac has watched, amazed, as Max has put on shows, put out product, hit the road, and just generally been a driving force, pushed along by his own clear energies. Nordile seems to always have something cooking.
Descension/Digestion, from Nothing Band, is one of a few such works that he has thrown my way for listening to.
Described as a two part concept album, this recording by what sounds to me like a trio features a group sound that is made up of short, sharp blasts of primal Blues-inflected Garage Punk Rock. The group swings together with the kind of unique vision that, to my mind, shows them as having put in a lot of effort at some type of rehearsal pad. Nothing Band feature rattling guitar riffs paired with clipped bass notes, both pushed by clattered drums and and occasional alto sax honk, all evincing the kind of "fuck everybody" singularity, in terms of their sounds, that all bands should aspire to. The bio blurb on the Bandcamp page for Digestion mentions No Wave, and, indeed, Nothing Band do achieve that coveted effect of, to paraphrase Lydia Lunch, an urban laundry mat in full motion. Atop the racket, Max recites his personal stories in scraggedly way that suggests off-handed insights and perhaps a fair amount of frustration with....something. It's to his credit that these lines remain somewhat obscure; they leave a lot to the imagination, entirely a good thing. Disaster Amnesiac feels very certain that Policy Wonks, however, is the best dis song that I've heard in a minute.
Fourteen songs clocking in at a concise twenty minutes or so, this one's perfect for post-work day's end head cleaning. Stay tuned for more observations of music generously shared by Max Nordile, but Disaster Amnesiac will likely be spending the next couple of days letting Descension/Digestion scrape off the lower regions of my cranium.

Posted by Mark Pino On Drums at 6:32 PM No comments:

The San Francisco Bay Area continues to go through myriad changes these days. Disaster Amnesiac has noticed towns such as Palo Alto and Walnut Creek morph into strange little Beverly Hills imitations. San Francisco proper? Forget about it! Even gritty old Oakland is turning into a bit of tourist showcase. The list goes on and on, as do the observations and commiserations of long time residents. That said, the music somehow remains, thankfully. Of late, I've received some sweet musical libations from a handful of local creative musicians. Here are my thoughts! 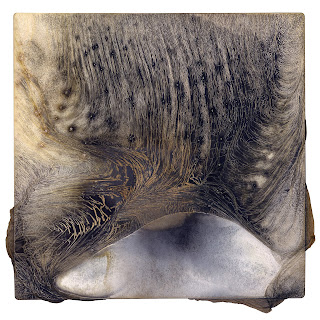 Voicehandler-light from another light; Humbler Records, 2018
It's been a few years since Disaster Amnesiac has heard from Voicehandler, and I'm glad to hear them back on record. light from another light features a few changes, with Jacob Felix Heule switching to a full drum kit and Danishta Rivero seemingly putting away the text-based vocals from their 2015 release for a looser style. The former's performance is damn great. Jacob explores the kit with an ear towards the vocal sounds, always sounding focused on and in sync with Danishta's voice. This voice is, as stated, much looser, pushed a bit further back into the mix. This production pairs really well with her glitch-ey, pinpoint electronics; it's almost as if they are intended to sound like one fused instrument. The engineering on the three tracks of light from another light must also be mentioned for its sumptuous treatment of Heule's kit. A top notch recording in both performance and sound capture. Will we really have to wait another three years for new recordings from this great duo and their active, elevated Experimental Music visions? 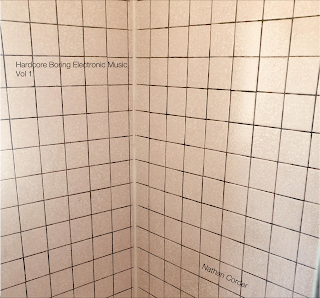 Nathan Corder-Hardcore Boring Electronic Music; self-released via Bandcamp, 2018
The vibe that Disaster Amnesiac gets from Nathan Corder's Hardcore Boring Electronic Music is one of hardened Minimalism. It's nowhere listed from what sound sources these tones spring, but they certainly are allowed to ring out unimpeded and seemingly unprocessed. Tones emerge and float into the ears before they morph, at their own paces, into new ones. Opener I could go to the movies has eerie notes that wrap around a beautiful high note drone. Centerpiece What comes through the door brings the Hardcore element. Its squealing high tones get pretty piercing at times. Give yourself some space from the speakers as you listen, though, and they become lovely bolts of lightning within a room. This one builds into a heavy crescendo before slipping away a bit more quietly. Strata brings back the contemplative drone for a few minutes before launching into some mysterious chords that bring about lovely overtones and foggy visions. Nathan Corder does SF Bay Area Minimalism right, by Riley! 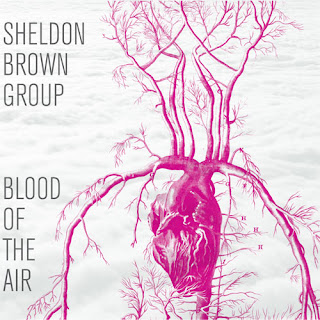 Sheldon Brown Group-Blood of the Air; Edgetone Records 2018
Here we have long time Bay Area woodwinds player Sheldon Brown and a cracking great group paying tribute to the words and voice of poet Philip Lamantia. Blood of the Air features Brown's incredibly astute writing; seriously, following these charts' sounds is a thrilling instrumental experience. Paired with the great vocal interpretations of Lamantia's written words by singer Lorin Benedict, the sounds on this disc swing, shout, rock and just really kick ass. The rest of the group, trumpeter Darren Johnston, guitarists Dave McNab and John Finkbeiner, pianist Jonathan Alford, bassist Mike Wilcox, drummers Vijay Anderson and Alan Hall, and theremin player Andrew Joron provide ample talents to make the music on Air fly out in very effective ways. This here is whip smart music played by top flight musicians, and if the international Jazz Community ignores it, it really is neither. Seek out Philip Lamantia's richly Surrealist poetry as a add on for this shining star of a record. 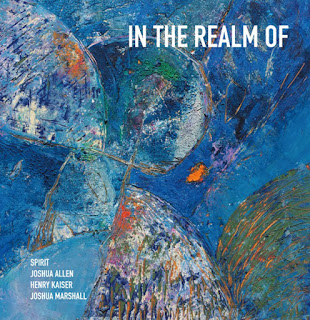 Spirit/Joshua Allen/Henry Kaiser/Joshua Marshall-In The Realm Of; Fractal Music 2018
Last up we have a disc of sublime quartet music from more SF Bay Area heavy hitters. In The Realm Of features tenor saxophone players Joshua Allen and Joshua Marshall mixing it up with the rhythm section of Spirit and Henry Kaiser. Over multiple listens, Disaster Amnesiac has imagined myself watching sublime hieroglyphics or subtle zen brush artwork being done. The music on this CD is downright delicate at times. It's as if the four of them are in a room, passing conversations around and around, with each member adding or commenting upon what's being said. For a strong dose of the sounds of everything right and good about current improvisational music techniques and aesthetics, one will want to find a copy of In The Realm Of. This group's sound is one of listening and playing together in the deepest of ways.

The San Francisco Bay Area is filled to the brim with music and music scenes, way more than one person could ever really find and take note of. The above four recordings represent some of the best that Disaster Amnesiac has been able to find this year. What's going on in your region?

Posted by Mark Pino On Drums at 4:50 PM No comments: 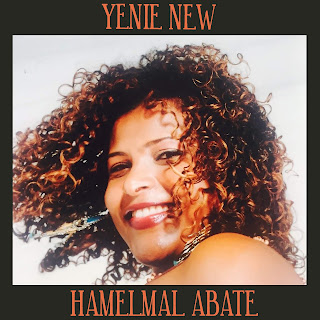 Along with Youth Chairs, Los Angeles drummer David Winogrond is a member of Hamelmal Abate's group.This latter has released a very dynamic digital single, Yenie New b/w Zelesgna, and, thankfully, shared it with Disaster Amnesiac.
The A side features a sharp, horn-driven arrangement and Winogrond's characteristic tight ride-cymbal lead playing. Flying atop the music is Abate's great alto singing, full of Ethiopian trills and sweet melodic effect. Yenie New is an energetic and driving rocker of a tune that brings to mind the Los Angeles Punk Rock of the late 1970's and early 1980's for Disaster Amnesiac. It has that same pairing of concision and frantic drive.
B side Zelesegna features a more traditional Ethiopian sound, possibly familiar to listeners of any of the Ethiopiques series. The vocals feel a lot more introspective within the slower waltzing pace of the song as violin and keyboard sounds frame Hamelmal's vocal. As I'm writing this, the sun is rising outside my window, and it fits perfectly with the tone of Zelesegna. That said, the track could probably work for the day's end, too. It has that kind of pensive drama.
If she hasn't brought David and her band north of Los Angeles already, it's my hope that Hamelmal Abate does so soon. Disaster Amnesiac would love to see and hear them at Ashkenaz in Berkeley or some similar venue! Get 'em in the van, David!
Posted by Mark Pino On Drums at 8:46 AM No comments: