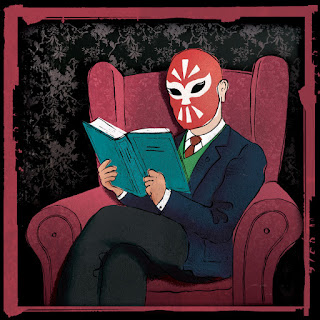 Controlled Bleeding first came on to this listener's mental radar back in the late 1980's. Teenage Amnesiac had a friend that was a brilliant artist and thinker, and as such, this friend knew creative types that were a bit older and a bit more tapped in to the deeper currents of underground music. I recall getting a chance to thumb through one of these peoples' LP collection, and for some reason, the Controlled Bleeding stuff left the kind of mental impression that urged: SEEK THIS STUFF OUT. Over the years, Disaster Amnesiac has enjoyed hearing their output when possible, and, naturally, ended up following them on Facebook. Needless to say, I was compelled to check out their latest offering, a split with Italian group Sparkle In Grey, when it was announced on their page.
Perversions of the Aging Savant is presented less as an arbitrary split release, and more of a single-themed work. One great aspect to this theme is that a lot of its meaning is left to the listener to to ponder; aside from the titles, not a whole lot of info is given regarding this. What is given in spades, however, is a glut of musical changes and approaches, the entirety of which is delivered in all-instrumental fashion.
Controlled Bleeding present their sounds first, in a section titled "The Perks of Being a Perv", and it's quite impressive to hear their ideas therein. They run the gamut from Musique Concrete-like collage tones in Intro, to Heavy Psych Progressive in Garage Dub and Birdcanned Pt. 1 & 2, with their fantastic guitar squall and fine, free drumming, to the smashing Industrial aggro noise of Perks, and the pastoral loveliness of Springtime in Brooklyn. A short, guitar-led live track from 2012 is tacked on to the end of the CD version of Perversions, an introspective coda to the proceedings. One aspect of Controlled Bleeding that Disaster Amnesiac finds fascinating and inspiring is the way in which they've developed their unique voice: however they've wanted to! The core group of Paul Lemos, Joe Papa, Chad SB and Tony Meola seems to use whichever form that they're currently interested in exploring, all the while keeping their Experimental Music edge, and their unique voice, in the process. Their tracks on Perversions of the Aging Savant show this process to be one that is still evolving in creative, musically compelling directions.
Disaster Amnesiac was not familiar with Sparkle In Grey before hearing Perversions, but after having done so, I'm surely happier for it. Their section of the release, "The Rant of the Idiot Savant", is made up of four connected pieces that feature droning violin, piano, electronics, bass, and sax. This one starts off with a feel of late-night/early morning chamber jams, somewhat quietly burbling, then leads up to more assertive rhythmic patterns before sinking back into the ambient zone. It's as if the Savant's interest had been piqued, then his/her opinion served up, and then he/she had quietly skulked away into the night. As I've listened, I've thought that I'd love to hear Sparkle In Grey live, and their bonus track, also at the end portion of the disc, with its great, spacious drumming of Simone Riva and sweet, minor harmonic horn lines, only adds to that desire. Perhaps they could book a joint U.S. tour with Controlled Bleeding?
As I mentioned a few paragraphs back, Controlled Bleeding will always remind Disaster Amnesiac of certain key aesthetic influences. Looking back on those, for me, early exposures to creative art and music, I do feel a certain nostalgia, but I am certainly glad that groups like Controlled Bleeding have kept looking forward and developing their music, all the while never giving in the formulaic thought traps that can snare musicians over time. Underground groups such as them and Sparkle In Grey are doing fine work, pulling from various streams of music in order to develop their own voices. They may be aged, they be perverse, but don't let any of that scare you off of 'em. These savants' offering here is very worthy of your attention. 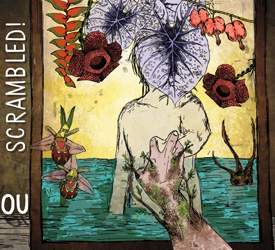 Posted by Mark Pino On Drums at 7:54 PM No comments: