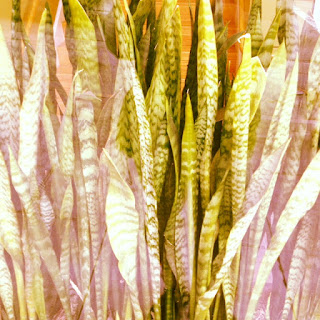 Disaster Amnesiac usually likes to post a lot of photos from live shows attended, but as band leader Jim Ryan had the Berkeley Arts Fest staff turn the house lights down, I realized that it would not be an evening for photography. Probably for the better, that, as Green Alembic spent their set playing music that required, and rewarded, attentive listening. An octet with all kinds of strings and woodwinds, plus processed m'bira by Ryan, Green Alembic went deep into their improvisational zones, going from spare, silence-filled areas to full-on group-freak. The group's timbres were rich and elemental in that special way of acoustic instruments (elemental as in earth, elemental as in water). Ron Heglin's very present trombone riffing was especially pleasing to Disaster Amnesiac's ears. Why have I not seen him play before? Michael Cooke's shen playing was revealing: it is amazing, the way ancient instruments sound so very current. At times, his shen sounded like some electronic patch that is yet to be developed. Other group members Joe Lasqo (piano), Bob Marsh (bass), Jeff Hobbs (cornet, clarinet), Doug Carrol (cello) and Angela Hsu (violin) played superbly as well. I was once again reminded of just how many great musicians the S.F. Bay Area is gifted with.
Green Alembic's set was augmented by visuals by Ryan and the recently deceased Paris-based artist Arlene Hiquily, all streamed by Powerpoint. Hiquily's somewhat occult-themed paintings are well worth checking out. Ryan's expressionist pieces were powerful in their visual simplicity.
Towards the end of the set, Ryan recited some of his poetry, which seemed Beat-influenced, evoking street scenes of the East Bay in my mind.
Amazingly, Marsh popped a string on his bass, as if to signal the end of the evening's music, and the group quietly stopped.
I hope that further distillations can be heard from this Green Alembic.
Posted by Mark Pino On Drums at 8:11 AM No comments: