Do the Muffs speak Objectivist? 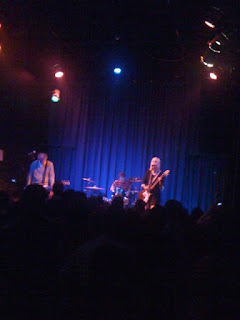 Last night Disaster Amnesiac watched the Rush documentary, then promptly went to the Uptown nightclub in downtown Oakland to watch the Muffs.
It was a tough transition. The Muffs do their thing well, but I must admit that my perception was colored by the Rush story. 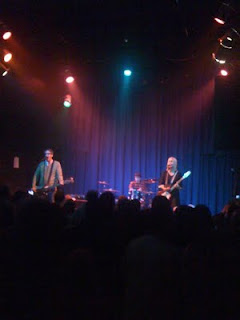 "We are strangers to each other
Full of sliding panels
An illusion show
Acting well rehearsed routines
Or playing from the heart?
It's hard for one to know"
-copyright Rush, 1980

Lines like these echoed in my mind as I watched an actual cover band (who play covers of a band that is so derivative of their influences as to be practically a cover band themselves) warm up the crowd for the headliners from L.A.
The Muffs played with energy and enthusiasm, and the assembled adored accordingly. Disaster Amnesiac sipped Pabst and hummed Rush tunes to himself. 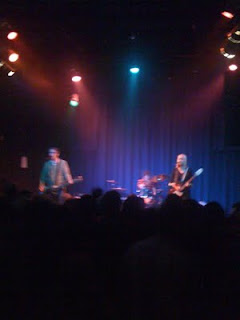 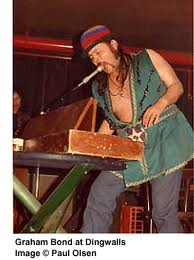 In light of the previous post, it stands to reason that Disaster Amnesiac would start digging into some of the musical artists of which he'd read.
It must be stated that although I mentioned enjoying reading about Graham Bond's tragic demise, please don't go and call your old pal D.A. some kind of sadist. To clarify, this blogger simply found Bond's story compelling and interesting. Ye olde Amnesiacke also really wanted to hear some of the Bond music highlighted by Young. Thankfully, Amazon had plenty of copies of the 2006 Holy Magick re-issue available. Within days of finishing Electric Eden, I was grooving to Holy Magick's  bewitching tones.
The LP's centerpiece, Meditation, a 23 minute invocation/adoration of and for the old Gods, begins with incantations that invoke images of the best Chick Comics in this blogger's mind. Being "just a modern guy" and all, Disaster Amnesiac finds this section of Bond's reverential epic somewhat of a distraction (yes, I am aware of post-Thelemic and Gardenarian Western mysticism, but, frankly, find it all as compelling as studying Maoist thought). It's when the band kicks in that things get good here. Twenty or so minutes of ascending and descending chord-age, kicked into gear by the heavy, tranced-out drumming of Keith Bailey, greased by hot Leslie-ed organ grind (weirdly uncredited, but it's there), and accented by bubbling conga playing by Big Pete Bailey. The tune features call and response vocalizing worthy of a Lagos all-nighter, repetitive riffing to match any L.A. blues or space ritual, and Bond's expressive and distinctive bluesy growl. Significant time spent listening to his voice makes it clear why he remains the object of such great esteem amongst both his contemporaries and collectors that have come along later. His saxophone playing is damn bluesy and great, too. It's within the musical meat of the Meditation where the mystical lyrics take their more comfortable place as chanted words within a musical matrix (you know, Rock-n-Roll!) and subsequently have a less important air. Surely Bond would have disagreed, as his liner notes go to lengths to stress that importance. One can't help but wonder if maybe he'd taken the mysticism a bit more lightly and just let the dumb, fleeting glory of  rockin' out have its proper due, he'd have avoided the precarious mental states that proved to be his undoing. We'll never know, sadly.
The rest of the record continues with shorter mystical vignettes, dealing with Arthurian Legend, the Apocalypse, archangels, and c. These tunes get back to a simpler, Blues-Rock feel, and, though finely played and sung (that voice, again), fail to reach the highs of Meditation's climb.
The 2006 re-issue also contains the single release for the album, Water Water. This tune's percussive gris-gris hell fire chanting makes me long to find a bar in which it is among the juke's selection. Preferably in New Orleans or London.

In October of 2010, Mr. and Mrs. Amnesiac found ourselves ambling through London, in between Primrose Hill and Camden Town, when we came across the Cecil Sharp House. The facility's varied spaces (theater, pub, class rooms) were fascinating to us as we took a brief, self-guided tour. Having read about some of the artists who had presumably sung/hung out there in Ugly Things magazine, I was thrilled to be hanging out there myself, albeit at a time of day when most musicians would either be asleep or just ending their evening.
This experience primed me for the immense undertaking of reading Rob Young's 600 page overview of British Folk-based music, Electric Eden.
Working from the premise that Britain has a long and rich history of folk-based musical forms of production (in contradistinction to certain German composers' stated opinions to the contrary), Young gives detailed description of those forms, from the late 19th to the late 20th centuries.
In Young's opinion, the British yearning for a return to an idyllic Albion, cleansed of the complications and crises of modern society, informs and shapes this indigenous music. Chapter titles such as The Inward Exodus and Orpheus in the Undergrowth underlie this central tenet; they and all the other chapters spin yarns describing the various voices of this musical movement.
Presented in a loosely linear form, Electric Eden moves from the early 20th Century British composers and their struggles to define their identities within composition (not the mention the immense heartbreak of the nation upon the advent and subsequent developments of WWI), to the post-WWII "purists", and onward to the 1960's technicolor polyglot, post-modern forms. These last two are given the most detailed treatments. One can see why, as the richness and variation of their participants are fascinating. Disaster Amnesiac particularly enjoyed the peripatetic story of Vashti Bunyan, the tragic yarns of Nick Drake and Graham Bond, and the detailed developments of the U.K. festival scene (linked very implicitly to the deeper currents of British earth-based mystical thought).
Electric Eden is a deep, engrossing overview of a fascinating musical development. The listener will find tons of sounds to dig into, along with detailed descriptions of many aspects of British culture and life. Recommended, even for German composers. Maybe, in a symbolic act of international peace and understanding, I'll shelve my copy next to the Kraturock coffee table tome.
Posted by Mark Pino On Drums at 8:45 AM 2 comments: