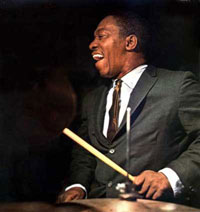 If you have read this blog before, and hadn't already surmised as much, Disaster Amnesiac is a drummer. As such, I love drums, and love listening to drums. I have amassed quite a few recordings that are of either a "solo drums" or "drummer featured" nature, and have often wanted to blog about them. That said, I realize that most people probably don't want to read at length about these types of recordings. Therefore, I have initiated the Up Half Known Roads: Solo Drumming Records series, in which two or three separate recordings of this type will be described and enthused about per installment.
Please insert drummer joke here:            , and read on. 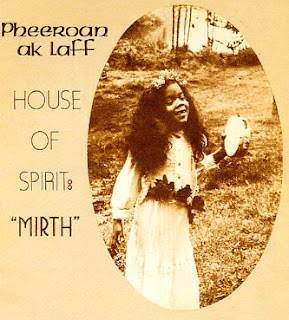 ak Laff was only in his early 20's when this righteous slab of percussive interplay was waxed, but, he had already spent time studying  with Motown's Funk Brothers, Tribe Collective, at the University of Michigan, and, on the East Coast, with Free Masters such as Rashied Ali, Wadada Leo Smith, and Oliver Lake. Needless to say, he had chops and musicality to burn, and both are on display here. Using only voice and heaps of drums, live-tracked and overdubbed, Pheeroan, with the help of Executive Producer Lake, concocted this fierce percussive display over two days in 1979, dedicated to a fallen brother of the Vietnam Conflict variety. Masterful use of mallets on toms, snare rudiment techniques, full-on trap kit beat funkiness, African drums, and chanted lyrics all mix and mesh for a spiritual work out. The vibe is definitely one of incantation and personal ritual drum jamming, one which will be familiar to any drummer who has spent time alone behind the kit. Disaster Amnesiac is sure that humans of the non-drummer variety would also be moved by its slamming rhythmic mojo. Spiritual mirth! 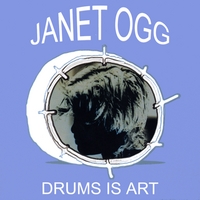 In the post immediately preceding this one, Noh Mercy drummer Tony Hotel gives and extensive description of her nearly fifty year drumming career. Also take note that Hotel and Janet Ogg are one in the same person, and this CD, a sonata for drums, really, is her most current work. Drums is Art is a Jazz drumming-centered affair, in which Ogg displays her extensive skills on the trap set, driving tunes that feature piano, electric keyboard, sampled percussion and pure electronic sound washes. Bop, Modal, Free, and Harmolodic approaches to the art of trap kit playing are all touched upon.Ogg swings her kit through all of it, moving from intricate poly rhythms a la Tony Williams to spacial abstraction reminiscent of the Modern Compositional style, always displaying a robust, personal sound. She also adds spoken lyrics to the mix on occasion, and her oratory on No Thinking may be the best manifesto for creative vision I have ever heard. Hers is as personal a vision as you can find, and Disaster Amnesiac loves it accordingly.

In concluding this inaugural edition of the Up Half-Known Roads series, I'd just like to say keep bangin' the gong, and stay tuned for more percussion-centered spieling from Disaster Amnesiac, along with the usual Describing and Enthusing that you've grown accustomed to.
Posted by Mark Pino On Drums at 2:15 PM 2 comments: 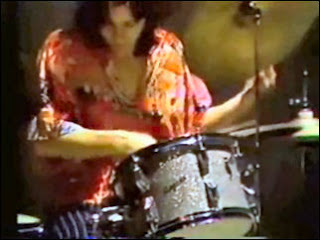 Some years back, Disaster Amnesiac read an interview with the woman who did the initial downloading of images from the Hubble Telescope. She spoke of how exciting it was to be the first person to see the fantastic images being beamed back to Earth from deep space. As I listened to the answers that Tony Hotel sent to me via Quicktime audio, I had a similar feeling. I felt as though important, unseen/unheard information was being transferred to me, and I was exceedingly humbled by the experience. Of course, I'm sure that Tony has communicated her experiences to others, but, as a rabid fan, her story was uncharted to me, as I'm sure it has been to many others.
It is my hope that the interview clips contained herein will give Tony Hotel/Janet Ogg a lot more of the exposure that she has determinedly earned in over fifty years of involvement in music.
With much respect and admiration, I give you Tony Hotel, in her own words.

Below are the initial questions, as emailed to Tony:

You give a lot of biographical information in the liner notes of the Superior Viaduct reissue, and I would like to extrapolate from that.

1.You were born in Dayton, OH. What was it like to grow up in the mid-West in the 1950's? Do you have any particularly striking impressions of that time?

2.What or who inspired your early interest in guitar and drums? It seems like you were attracted to music very early in life. Was there some event that sparked this interest? Who were some of your early teachers, and what were some of the early lessons that you learned from them? Did you study rudiments on the drumming side?

3.You mention your first group, Oggs Odds, from 1963. Was it the Beatles' arrival in the U.S. that inspired this early group? What was your repertoire like? Did you write your own music?

4.After Oggs Odds, you played in the Debutantes. Judging from the liner notes of the Noh Mercy reissue CD, this was a very rich musical experience for you. Please elaborate on this group and your drumming roll (no pun intended) within it.

5.Your time at Berklee also seems to be quite a rich experience. What were some of the highlights from that period in your career? What approach to Jazz did your quartet use? What was the instrumentation?

6.Your time after Berklee unfolded in the early 1970's. Please describe the paths that your career went down during this period. Dayton, L.A., etc. You mention it being somewhat like that of a journeyman baseball player's life. Please elaborate on that point. What were some stand-out gigs or experiences?

7. Please describe what San Francisco was like in the 1970's, for you, pre-Punk and Noh Mercy. Which districts did you frequent? What was the Jazz scene like? How about the Cabaret scene? Were you playing out a lot in Jazz groups?  How about in Rock bands? What were you up to during this time, creatively?

8.Both you and Esmerelda write about how inspired you were upon your initial meeting. What were some of the concepts that you brought up to each other? What was your initial jam like? Any stand-out memories?

9.Noh Mercy's music has, at times, a ritualistic, "tribal" feel. Were you drawing from the music of non-Western cultures, or was it strictly the poly-rhythmic element of Jazz's influence that gave your drumming this feel? There are also tunes with heavy back beats. Were you listening to a lot of Funk as well? What streams of music were you pulling from, generally?

10. Please describe Noh Mercy's song writing process. How did you shape ideas into songs? Did you practice a lot? Were the creative ideas explicitly discussed, or were they more intuited?

11.Your drum parts are so crisp on the recordings. Did you practice a lot on your own at this point, or was it just flowing "on demand"?

12.In the liner notes of the reissue, V. Vale describes seeing Noh Mercy play at Mabuhay Gardens. Were there other venues in San Francisco that Noh Mercy performed in? How about other towns in the Bay Area?

13.The live tracks on the reissue CD, from the Catalyst in Santa Cruz, seem to show a band with a lot of people cheering them on. What was Noh Mercy's fan base like? Was it a sizable group of people? Who were they? Are there any particularly interesting people that you could describe?

14.San Francisco's music scene during the time that Noh Mercy was playing seems like almost an embarrassment of riches. Were there any bands or performers at that time that you found kindred in spirit or particularly inspiring?

15.What are some of the drum riffs or techniques from Noh Mercy that you are particularly proud of? Do you still have your Rogers drum kit?

16.One sad fact in music is that all bands eventually come to an end. How did Noh Mercy end? Did you and Esmerelda just lose interest? Were you getting into other projects?

17. Post Noh Mercy, where has your drumming career led you? What are you currently working on, creatively?

18.In closing, are there any thoughts or notes that you'd like to add?
Posted by Mark Pino On Drums at 7:20 PM No comments: 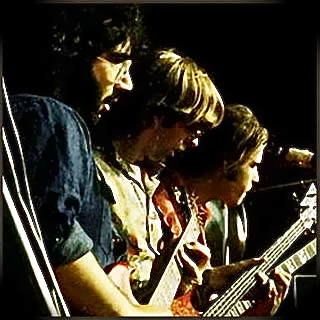 Another quarter, and another Dave's Picks rolls out,  the industrious folks at Grateful Dead Industries keeping up their manic pace of releases. Something tells me that Annabelle still doesn't need to work at Dairy Queen.
As Disaster Amnesiac has spieled at length two times this year already as regards this series, I will try to keep my comments pithy.
What we get from Dave's Picks Volume 3 is three discs documenting two nights at Chicago's Auditorium Theater in October of 1971. Significantly, they document Keith Godchaux's earliest moments with the band in a live setting, along with Pigpen's complete absence. As regards the former fact, one can hear him already putting his stamp to the band's sound, from his honky tonkin' work on the then emerging early 1970's tunes (Tennessee Jed, One More Saturday Night) to more free form approaches (Dark Star). Regarding the latter, Pig's absence is noted from the stage by the band; they do sound a bit nervous when talking about it in between songs. Definitely a harbinger of the Jerry-centric band that would go forward for the next two and one half decades.
The rest of the group is in fine form as they trot out so many of the tunes that would become their standard fare (Deal, Loser, Jack Straw), and play the hell out of their older ones (Dark Star, That's It for the Other One, St. Stephen). The version of Jack Straw is notable as it has not yet become the Bob/Jerry duo it would quickly evolve into; the Dark Star for its spectacular drop into the  ancient Dead territory of Sitting On Top of the World and subsequent quick spring right back out of it. Phil Phans will also be stoked at his presence on the mic as a harmony singer on many tracks. Jerry shines brightly on Comes a Time. The man loved the ballad form, and it shows here.
Disaster Amnesiac will always marvel at the way in which the Grateful Dead fused earlier American musical forms with their electric Psychedelia. The band reveled within an on-going musical process. How many other bands can really say that they approach their music with such adventurousness?
Posted by Mark Pino On Drums at 8:54 AM No comments:

Guitar vs. Gravity-City of the Past


Disaster Amnesiac has been digging this great two song virtual 7" by Ben Adrian's Guitar vs. Gravity. The opener, City of Simulacra, features somber reflections on the progress one's hometown makes while one is off living life. The tune's swooping bridge section and solid drumming from David Schollenbarger lead to great twinned guitar riffs from Adrian at its conclusion. Ben really soars here.
"Side Two", City of the Past, ranges between pensive lyrical passages and romping instrumental ones, followed up by an amazing two and one half minute jam, in which bassist Steven Pride, Schollenbarger, and Adrian conjure up a taut, interactive vibe, the likes of which Disaster Amnesiac will always love. One can hear them play together, adding to and augmenting each others' parts. True group playing within the Rock band format. Yes! The whole thing boils down to a mysterious, chiming end, and the listener is left rewarded.
The great thing about Rock bands is the way in which they can borrow from multiple sources, and great Rock bands can do this while retaining their own identity. As such, Guitar vs. Gravity is a great Rock band.Get this on your computer until Ben can get it on wax, and then, go and grab that,too.

Posted by Mark Pino On Drums at 2:45 PM No comments: