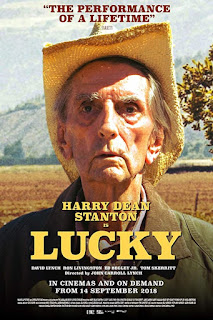 One afternoon last week, Mrs. Amnesiac brought some dvds home from a trip to the Marin County Library. Among them was a copy of Lucky, John Carroll Lynch's brilliant 2017 film. Lucky is one and one half hours worth of insightful meditation upon the (mostly) human condition of aging, and its effects upon one character and a few of his acquaintances.
The viewer is offered a glimpse into a few weeks in the life of an elderly man named Lucky as he goes about his simple routines: morning rituals of exercise and coffee, crossword puzzles and game show viewings, truncated and awkward conversations with people who share mostly tenuous emotional connections.
The takeaway message that comes across very strongly from Lucky for Disaster Amnesiac is the elemental nature of aging. By that, I mean the way in which we are very much reduced by aging. Harry Dean Stanton does an incredible job of illustrating this fact. It seems not as if he's really acting at all, but simply making statements, statements which are boiled down to an elemental simplicity that is devoid of pretense. The man is there, and he says exactly what he is thinking. He's old, so why bother with an act, right? There is so much to be considered within this message, at least for Disaster Amnesiac, as I approach the middle of middle age.
Lucky's cinematography seems to echo this message. So many of the shots show worn down, aged structures and topography, and these shots' quiet simplicity offer the viewer a visual complement to the stripped down dialogues. The film's desert setting itself belies this.
Disaster Amnesiac does not want to venture into hyperbole, but I really do think that Lucky is a damn masterpiece of cinema. I can't recommend it highly enough for anyone over the age of forty, that is for sure. For those of us "over the hill", the message seems clear: you're fading away, but you're still present, wherever you find yourself to be. Don't fuck around with your old act. Say it straight, play it straight, and perhaps, once in a while, you'll find a little bit of luck with which to work.
Lastly, a belated RIP to Harry Dean Stanton, you always kicked major ass in  your work.

Posted by Mark Pino On Drums at 9:14 AM No comments: 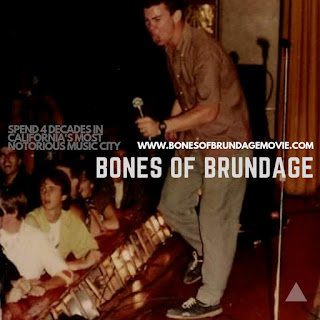 Bakersfield, California does not have much in terms of glamor. Disaster Amnesiac would venture to guess that for most people in California, it's a place to maybe pull over for gas or eating, before or after the Grapevine on the way to Los Angeles or San Francisco. That being said, the city does have a very rich musical culture, bulwarked by a rich mixture of hard working people. It's from this mix that arose a very vibrant post Punk Rock scene that is incredibly well documented in Nathaniel Berg's Bones of Brundage.
Berg does a great, very deep dive into this scene in from the 1980's to roughly the present, with interviews of myriad participants. Their stories show a music scene that bursts with energy and creativity, and as Disaster Amnesiac watched Bones, I could not help but feel inspired by all of them. It's a classic d.i.y. tale. Young people want to create things for themselves. They find places, in these kids' case, an old dance hall, a gay bar, a pizza parlor, and a boxing gym, in which to realize their visions. They see these visions come to life in unexpected and magical ways, all the while pushing through indifference and even outright hostility from the outside.
Berg is smart in the way that he lets his subjects speak for themselves about these matters, and it's fascinating to learn about this, mostly hidden, musical history of a city that seems somewhat easy to pass by without too many second thoughts. Particularly compelling are characters such as Big Jed, who could easily have his own dedicated documentary film, the almost lost to history Burning Image, and Korn's Jonathan Davis, who eloquently breaks down his reasons for forsaking Los Angeles for the weirdness of Bakersfield suburb Oildale.
Along with the great documentary video and photographic footage of the years it documents, Bones of Brundage succeeds with a really fine soundtrack and compelling mis en scene of Bakersfield and its surroundings. Disaster Amnesiac absolutely loved this film, and thinks that you would, too. It's really quite inspiring.

Posted by Mark Pino On Drums at 4:50 AM No comments: