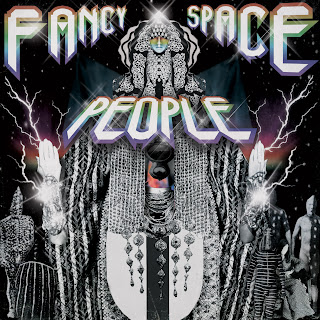 As American society crashes and careens through History, we often seem to find ourselves at points of spiritual crisis. Winter of 2011 seems like a particularly trying time to be an American. The Hope and Change that was promised in 2008 has hit the walls of harsher, harder world realities. People seem pensive at best, bitter at worst. In Disaster Amnesiac's opinion, the current mood in America is one perfect for cult leaders' opportunistic entree into the lives of those who may feel particularly let down and/or lost.
Thankfully, there's a cult in existence that will only ask for a few bucks towards purchase of an eponymous  white-vinyl three song release. That cult's name is Fancy Space People.
All cults need some kind of Revelation, some Knowledge to impart to the seekers who find them. Fancy Space Peoples' Revelation comes in the form of a glorious mixture of Rock and Pop styles, primarily mid-1960's-the present, all mixed together to Blissful  Perfection. The three tunes on this EP are seriously well written and arranged. One hears echoes of early Psychedelia, Glitter, Avant-Garage, obscure Soundtracks, 1990's Big Guitar, Art Punk, etc, etc. The kind of ambitiousness on display here would in less Adept hands result in an ugly mash-up of "eclecticism". The presence Space People Mainman Don Bolles, a decades long veteran of creative music making, assures that the tunes are expertly arranged. Every twist and turn sounds spot-on, occurring at the exact right time.  Do you think that Father Divine or Rael had bad timing? Their messages depended upon hitting the right note at the right time, and the music of Fancy Space People is no different.
All of this aural deliciousness supports the Mystical and Loving lyrics of Nora Keyes. As she's credited on the jacket, No-Ra's distinctive, unselfconscious warble sends messages of Love to greater Humanity from Fancy Space People. The main messages seem to be: Fear Not! Create! Have Fun! Love! How can one really argue, especially at such a psychically delicate time for the New Age?
As for the overall sound of the EP, it's big and booming. While it has been released on the independent Star Tone Records, it benefits from the seemingly substantial resources available to the label's founder, Billy Corgan. Disaster Amnesiac read a Rolling Stone interview with Corgan last year, in which he lamented his treatment at the hands of the New Media Wing of the Music Industry. To Billy, I say, Fear Not, Brother. Your Good Works within the Fancy Space People camp are more than enough to redeem you, as if you ever needed redemption from the likes of Pitchfork et al. Perhaps a 7" release of Fancy Space Peoples' 2007  Spectacle Electric would assuage your hurt feelings even further? Just suggesting, one Member to another.
Millenarian-ism is nothing new in the world. In America, it has been honed and refined to a fine point. Fancy Space Peoples' Millenarian Pleadian Scriptures, well within this continuum, should come as welcome messages to any Rocker who may feel distressed in these psychically trying times.

Changes in the City-The Chatterbox by way of KUSF

In mid-January of 2011, the University of San Francisco sold off the rights to the broadcast band on which its radio station, KUSF, had been located. In a rather ham fisted move, the USF administration did not tell any of the KUSF staff about the sale. Subsequently, a corporate Classical station began broadcasting on frequency 90.3 FM minutes after locking the doors on any KUSF staff that happened to be on site.
KUSF DJ's and their supporters have vowed to fight the change, going so far as to petition the San Francisco Board of Supervisors to initiate legal maneuvers in order to halt the sale. Disaster Amnesiac has followed the story with interest, and while saddened by the loss of a station with pleasingly diverse aesthetics, can't help but wonder if the the disgruntled staff and fans realize that USF is a private institution, and that KUSF's physical and band space were donated to their users. Maybe that's a simpleton's explanation, but it seems undeniable.
A HARD fact, especially within cities: there is a constant battle for space, money, and the time needed to fill and make them. As long as people choose to participate in a city's evolution, they risk being steam rolled within this dynamic. Friendships are wonderful, and communities do arise from friendship networks within cities. Sadly, cities change. People change. Circumstances change. Again, a hard fact of life, but stubbornly and, for the most part, irreversibly true. As a city's life evolves, institutions are born, grow, and end. These are all direct results of the the commerce that occurs in a city. One wonders what pressing economic needs USF was addressing by the sale of 90.3. In this writer's opinion, the university needed money for capital projects, and the sale of KUSF helped raise that money. Again, the University of San Francisco is a private institution, and their mission is primarily to educate students, not primarily to provide space for a volunteer-based radio station. While some critics of the sale have described USF's profits from it as a pittance, the fact remains that times are very tough in all financial sectors, and institutions need cash to advance their missions. It seems logical to assume that the money raised from the sale will be put towards that end by USF.  Any political action initiated to reverse a sale on the open market strikes me to be as ham-fisted as USF's PR bungling of the change in owner occupation.
Watching this political/economic drama unfold had Disaster Amnesiac thinking a lot about changes in the City (SF; DA's current city of choice, Oakland, features changes that are, sadly, much less publicly bandied about and WAY below the perceptive radar of most everyone in the U.S.)
These ruminations brought me to Chatterbox-Biography of a Bar, San Francisco 1986-1990, by Alfie Kulzick. 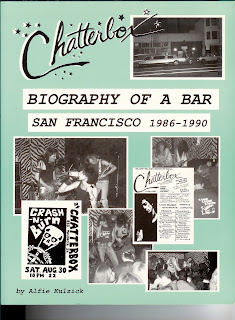 Alfie owned and operated the Chatterbox, located on Valencia St. in San Francisco's Mission District. In this great coffee table style book, filled with hundreds of photographs of the bands, staff, and patrons of the bar, one gets a clear and fascinating snapshot of a particular era of San Francisco's 20th Century history. Along with all of the photos is Alfie's chronological recounting of the Chatterbox's evolution: from her initial decision to leave a position at Aquarius Records in order to start the bar, to the middling years of packed houses and great shows and on up to the waning sales and  disastrous IRS audit that lead her to give up the ghost. Her style is frank, blunt, and unsentimental. Her passion for Rock-n-Roll as a vehicle for fun is made clear and unquestionable as the Chatterbox's story unfolds. If there is any justice in the world, Biography of a Bar would be included in any decent historical library of San Francisco, let alone that of any rocker with a book collection. So much of the swagger and grit of SF's underground Rock culture is revealed within the photos. Absent are the political activists that loomed so large out of the City on the national stage. Alfie's bar seemed to host a looser, more decadent crowd. Some people pictured have gone on to prominence. Most have not. One wonders "what are these folks up to now?"
As for Alfie, she's still in San Francisco, working at Lennon Rehearsal Studios in SOMA. Her dry humor and frankness are bulwarks within the high strung low stakes world of hourly music rehearsal studios. 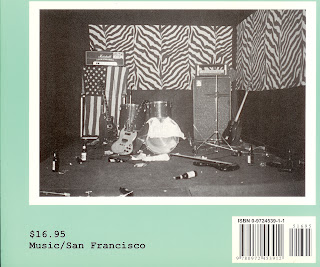 KUSF and the Chatterbox share similar stories and probably many of the same people. That they were both victims of the Historical churn of a "World City" is a tragic inevitability. Who knows, maybe the SF Board of Supervisors will figure out a way to nullify the deal that the University made with the Classical Conglomerate. That seems like a long shot, but surely there are some who have girded for a long fight, casting themselves as Punk Davids against the Goliath that USF has become in their minds. All that said, nothing lasts forever. The Chatterbox sure didn't, but Disaster Amnesiac is sure glad that Alfie Kulzick had the prescience to document and share the record of her dream gig.
Order Chatterbox: Biography of a Bar, San Francisco 1986-1990 here:
http://www.chatterboxbar.com/Chatterbox_Bar_Documentary.html