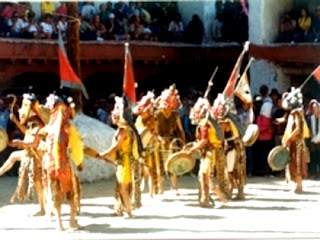 Winter is officially here, and in Disaster Amnesiac's home base of Northern California, this means rain. Rain in turn means long bus rides during commute hours. Thankfully, the old iPod is loaded with great music, which makes the longer slogs bearable.
One recording that has filled up tons of commute time has been Amnemonic, by Aboombong. The music of Aboombong is a great mixture of Industrial aesthetic, "World" percussion, and Psychedelic abandon. The tracks on Amnemonic sprawl out within these parameters, giving an air of the mysterious to the otherwise mundane chore of the day's commute.
Curious about what makes this cool project tick, I emailed Aboombong some questions, and he was kind enough to reply.
What was the genesis of Aboombong?

Aboombong started as a way to release detritus from my archive of half-finished projects that had never seen the light of day. The first album is pretty much just a collection of outtakes (recorded primarily from 1999 to about 2003). By the end of putting together the first release, I had a couple of loops and one percussion track that didn't feel finished enough to put out as is...these became the genesis for "asynchronic". Once I started working on these (Daymare and Never Been to Konono), I recorded some new material, mixed it with some older snippets and found myself with another album's worth of material.

I get the sense that Aboombong is a one-man project, but a lot of the music has the rich sound of an entire group's effort. Do you have a cast of musicians?

It is a one-man project...although some of the tape archives used on the first two releases include other players. Most notably David Chapman from !Para!helion on trumpet (Jericho) and the members of Waltz Bop Shop on Aboom. Everything else is me.

There is a definite, for lack of a better term, Third World feel in Aboombong, particularly in the various percussive approaches and instrumentation. Can yo explain where this approach comes from? What sparks it?

I listen to lots of music from around the world. That gets filtered through my American brain when I compose. Not much more to it than that. I don't every try to mimic specific genres or rhythms...but I do feel like I abstract elements or approaches I hear in music from other cultures and apply those to my own work. For instance, a lot of non-western musical traditions will use incessant unchanging rhythms underneath a more fluid foreground. I don't use those rhythms in any of my pieces, but the basic approach is one that resonates with me when I am composing.

In light of the mentioned "world percussion" approach, do you have formal training in any non-Western systems (eg Balinese Gamelan, Filipino Kulintang, Korean Samulnori, etc)?


Nope. Just lots of listening. I was briefly a member of a traditional Javanese Gamelan, buth other than the handful of lessons done to get parts down for that, I have no formal training outside of the standard American school-based music education. I did a fair amount of course work in college in experimental music, but none in non-Western traditions. More than anything, I'm just an old Punk Rock drummer who likes to experiment.


The recordings sound as if they were done with a lot of care, yet they retain a great, raw feel. What kind of recording set ups are used for Aboombong releases?


One microphone, a stand alone CD-r burner and a mixer. [The recordings] (R)ecorded one track at a time, mixed with Audacity.


How about individual instruments? As I listen to the rich bell tones, guitar tones, and drum tones, I envision a warehouse full of exotic percussion worthy of Martin Denny's studio. Is this the case?


Every toy is listed on the bandcamp page. That pretty much exhausts my collection. I live on a houseboat, so there isn't much room for storage. If I had space and money...it would be much larger.

Along with the excellent percussion, there are also great "junk electronic" sounds within Aboombong's music. What sorts of instruments are being used, and how much electronic manipulation is being made to their initial sounds?

Amnemonic's tracks have a very "ritual" feel; as one listens, one can feel transported to imaginary worlds, filled with wild street festivals or austere temples. Please speak to the creation of these soundscapes.

All I can say to that is...thanks. I have always felt like each piece of music should create it's own unique environment.

What lies in store for Aboombong? Any great projects looming on the horizon?

The next album will be based around some spoken word and field recordings. None of the musical elements have been recorded yet, but it should be quite different from the other three releases. I am also working with DUSTdevil & Crow on another release. Tracks are just starting to get bounced around the planet for that one.

So there you have the mysterious Aboombong in his own words. Do your mind a favor and click on his bandcamp link, where you can buy his music at good prices. And then float away.................

Posted by Mark Pino On Drums at 3:51 PM No comments:

3 Nights in August-Strategy, Heartbreak, and Joy Inside the Mind of a Manager, by Buzz Bissinger

Another week further into winter, another day closer to Opening Day! What a better a way to celebrate that American dynamic than by reading yet another baseball book?
Researched and written during the height of the "Moneyball" and the tail end of the anabolic steroid eras, 3 Nights in August ventures to go inside of probable Hall of Fame manager Tony La Russa's heart and head, in search of the real. Real passion and grit, as opposed to the stats obsession ushered in by the likes of Billy Beane and the "hey, I'm just an entertainer" attitude from players such as Jose Canseco. These factors are anathema to men such as Bissinger and La Russa, men who crave the beautiful "levers and pulleys" exhibited within the elegant complexity of f great baseball game.
The action of the book occurs during a three game series played between the St. Louis Cardinals and the Chicago Cubs. As Bissenger so effectively writes, it's as venerable a rivalry as Red Sox/Yankess or Giants/Dodgers. The tight divisional pennant race that was transpiring during this series only adds to the historical tension. Within this broader context, the manager's in-game life is illuminated by way of descriptions of various types of baseball player: the hard working, freakishly talented (Albert Pujols), the methodical, intelligent veteran pitcher (Woody Williamson), the coasting Star (J.D. Drew), the discipline problem (Kerry Robinson), the reliable workhorse (Matt Morris). Each player's trajectory, and La Russa's work, thoughts, feelings, and processes with them is described with honestly and objectivity. These straightforward appraisals of the good, bad, and ugly provide an excellent view into the inner workings of baseball as it is played and managed throughout a season.
As this book is now six years old, and the described games over seven years old, historical light is shed on just how short and tragic the shelf life of Major League pitching can be. The Cub's two star pitchers as described in the book, Mark Prior and Kerry Wood, pitchers whose talents seemed to shine so brightly, who seemed so destined for dominating greatness, have for the most part faded away. Bissinger and La Russa do much to acknowledge the outright toughness of the Game, fate's cruelties lurking right below the "tranquil surface" of the Game.
That said, they always come back to the wondrous and magical feeling that arises within a great game. To quote Bissinger's conclusion, "Just Beautiful Baseball". That in itself  makes up for all of the time spent obsessing. I could not agree more.
Posted by Mark Pino On Drums at 8:02 AM No comments:

Mrs. Amnesiac and I copped free passes to this fun, amazing event. We braved yet another SF Bay Area 2010 rainstorm to hang out amongst mycologists, hippies, punks, and other curious types. Check the photos and then, if the spirit grabs you, go and forage! Just, please, consult a mycology book before you eat! 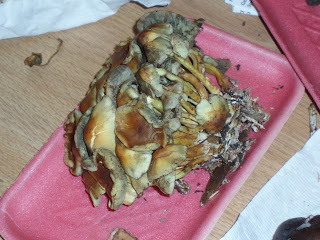 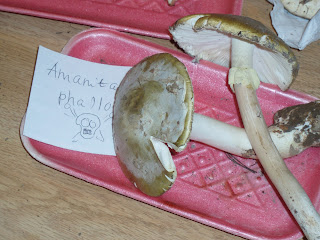 We even bumped into old pal Suzanne Carter, a member of the Bay Area Mycological Society! 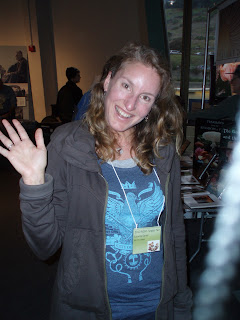 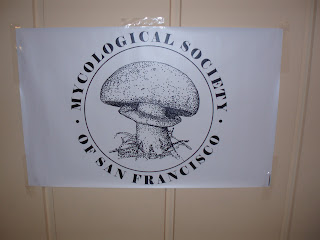 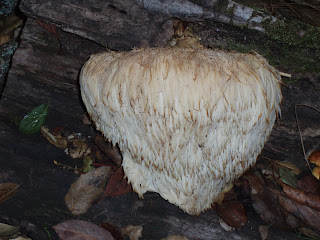 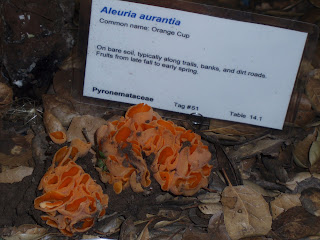 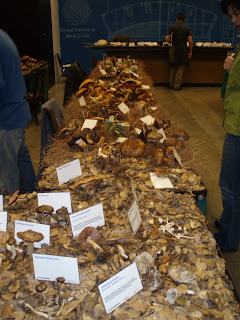 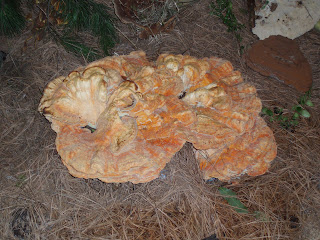 The afternoon finished up with a lecture by mushroom photographer Taylor F. Lockwood. His motto is "Chase the rain". 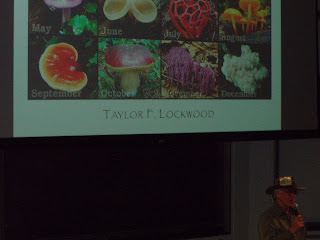 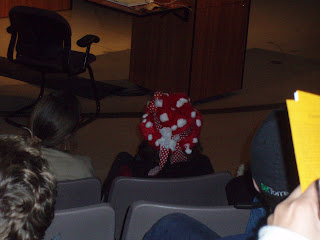 Posted by Mark Pino On Drums at 5:33 PM No comments:

Disaster Amnesiac continues the late 2010 trend in improvised music listening with this meaty 2 disc set by this NYC amalgamation of stone cold masters.
This all-live document of a set at Tonic in 2004 blasts off with the quickness, and rarely lets up. The players quickly delve into their respective bags of improvisational tricks, the sum total being a forest of blurping, bleeping, clicking, and ratcheting sounds. There have been improv sets that seem all the more boring for their insistence on "energy" and "fire", but the players that make up White Out for the Senso set manage to avoid those kinds of dynamics, instead achieving an intensely focused, yet highly energized interaction. There is never the sense players simply blowing for the sake of blowing. This is not to say that White Out doesn't  lack energy. That's not the case at all. The sound just has, for the most part, a sense of restraint as the players reveal new sounds and motifs into the overall  piece.
Drummer Tom Surgal is particularly impressive, utilizing rolling phrases to move the music. One wonders if he ever studied with Roger Blank, a mid-period NYC Free Jazz player profiled in Val Wilmer's classic study As Serious As Your Life. The question is asked due to Surgal's predominant use of mallets, an approach that Blank touted heavily is Wilmer's book. In a recent New Yorker podcast Blake Eskin, trying to describe Keith Moon's approach, opined "why not just be doing rolls the whole time?". This is essentially Surgal's style on Senso, and the use of mallets to effect these rolls gives his kit a melodic, rounded sound. It gives focus and drive to the scraping and feedback sounds emanating  from Liz Culbertson and Jim O'Rourke's synths and Thurston Moore's guitar.
After repeated listening, it's clear that engineer Kari Erickson deserves as much credit for the ease of listening as the players. The audio is stunning; each instrument is clearly captured, with none of the "in the red" qualities that often add to the hyperbolic macho of many improv settings.
The combination of spatial awareness, dynamic focus, and imagination in playing and presentation make Senso an entertaining document of what was surely a solid show by a great band.
Posted by Mark Pino On Drums at 10:48 AM No comments: