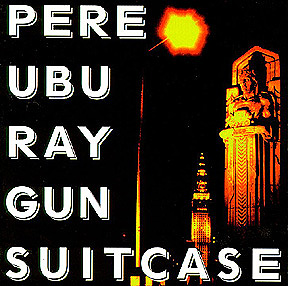 Disaster Amnesiac finds the 1990's to be pretty interesting, in terms of music culture, especially music from the era that involves electric guitars. It seems to me that the decade's Rock culture can be triangulated: 1) Immediate post-1980's period, with same old story up above and volcanic activity down below; 2) Nirvana explosion, with paradigm shift in tastes occurring and subsequent major label feeding frenzy; 3) Inevitable "back to business" model in the wake of diminishing returns up above and final fragmentation and music identity/cult formations up above.
I mention all of these factors because Ray Gun Suitcase, which was released smack dab in the middle of the decade, is the work of band that had a huge hand, explicitly or implicitly, in all three of stated points, and yet rises above all of them in its aesthetic grandeur and vision.
For example, take Head Ubu Man David Thomas, and his lyrical style. Disaster Amnesiac recalls reading press from Pere Ubu at the time of Ray Gun's release, in which Thomas described his overall conception for the record's lyrics to be an evocation of a Cleveland that remained only as a strong memory in his mind, a ghost town inhabiting a long-gone past. I can hear that in certain songs, such as Memphis and Electricity. There are also complex and insightful evocations of human lives in tunes such as Three Things and My Friend is a Stooge for the Media Priests; these tunes' lyrics paint pictures that remain far and away superior to most, in their era or others. Of course, Rock lyrics don't have to be poetic, but Thomas's writing on this LP seem to rise to that level. In terms of the stated triangulation, they remain superior to efforts from all three time frames, especially in their deceptively simple approach. They are the stuff of layers, as regards words. Listen, and be awed. As for Thomas's singular vocal style, one either loves it or hates it. Disaster Amnesiac is firmly in the former camp. One knows Thomas when one hears him, and, at the time of this recording, he had been sticking to his aesthetic guns for twenty years. His vocal approaches on Ray Gun Suitcase are indeed many and varied; his "horse snorting" sound on Electricity has always brought up Deleuze/Guattari-ian thoughts of "becoming animal" in this listener. He whispers, howls, yelps, and even croons his way through the tunes, all the while staying firmly planted within his own, unique, performing identity. Compared to the form fit front men so predominant of the three points of the stated triangle, Thomas sounds so much more compelling, and his performance on Ray Gun is high even within that standard.
Although Pere Ubu had been in existence for several years before Ray Gun Suitcase, the band therein was essentially new. Stalwart Thomas was joined by Jim Jones on guitar, Robert Wheeler on synths and theremin, Michele Temple on bass, and Scott Benedict or Scott Krauss on drums (founding member Krauss left mid-recording, I believe). The Raygun iteration of Ubu, rooted in pre-1990's Rock outplays most then-contemporary bands, twisting and turning in all kinds of ways. Their touch, a physical one, though quite removed from the demonstrative bashing that had become de rigour post-Nirvana, is heavy in a rhythmic way. Jones' guitar solo in Beach Boys and his high octane riffing in Red Sky are executed with such graceful command, yet also such simultaneous rawness. Wheeler's creative, spacey theremin and synth parts add great, surreal accents on top of it all. Almost twenty years later, their playing veritably leaps out of the recordings, from all sections of the band.
The overall feel that Disaster Amnesiac gets from Ray Gun Suitcase is the same one that Lou Reed got from Loaded. The album is chock full of songs that could have been hits. Listen to Beach Boys, with its catchy as hell chorus (and compare it that '95's summer jam by Everclear; you tell me which one is better), or Memphis, with its smooth motorik groove and stuttering riffage. More examples include Thomas' paean to populist America in Turquoise Fins (in Pomona!) or the almost Breeders-like (or should that band be described as Ubu-like?) Down By the River II. Even the more experimental pieces like Horse or Ray Gun (Thomas on plastic ray gun) have grown accessible over time.
To get back to the tripartite conception of the 1990's, and its relation to Ray Gun Suitcase, Disaster Amnesiac is just trying to say that it is an album that transcends such divisions, is transcendent of the simple categorization that is ubiquitous within the music industry. I guess, as such, its chances of wider success within that world were somewhat slight. All  that said, the album remains, in a word, timeless.

Posted by Mark Pino On Drums at 6:26 PM No comments:

Well, Paris actually. This jam was waxed in the City of Lights.
Disaster Amnesiac currently has the new Rolling Stones single, Doom and Gloom, pretty much on endless repeat in the iPod.
It's a great, pounding 2/4 boogie from the World's Oldest Band, and it sounds invigorated as hell, energized and energizing in that sweet way that only the Stones can do it. Keith and Ron are ragin' on guitar, riffing with that fine interplay that features on their best work together. Dig on that drop at the end of the chorus for ample proof of this. Ron's been a Stone for almost forty years now! Hard to believe! Keith and Ron can lock, for sure, and on Doom and Gloom, they lock massively. Speaking of locked, gray eminence Charlie Watts pushes the proceedings with his characteristic uncluttered tidiness, sticking to a propulsive kick/snare/hat pattern that grooves and shuffles with a motive force. As for front man Mick, he sounds equally inspired, ranting, and rapping the kind of darkened, somewhat cynical lyrics that the public has come to expect from a world class Rock Star and Original Bad Boy.
Maybe it's true that all they see right now is doom and gloom, but all that Disaster Amnesiac feels when this tune is playing is raw excitement. Who knew they still had it in 'em?
Posted by Mark Pino On Drums at 8:32 AM 2 comments:

Pain is the stimulus of pain, but then of course, nothing is cured. 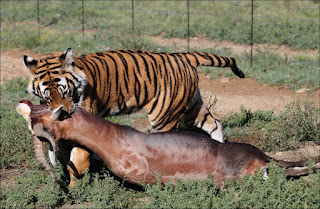 Over this last weekend, Mr. and Mrs. Amnesiac walked over to Oakland's historic Grand Lake Theater, via the lovely Trestle Glen Ave., to take in a viewing of Paul Thomas Anderson's new film, The Master.
The film has been treated by some as a controversial telling of the early years of L. Ron Hubbard's Dianetics, but Disaster Amnesiac does not want to reflect upon that aspect. Instead, I would like to opine that the story of Freddie Quell, the film's main protagonist,  reveals the necessary aspects of violence that any type of movement needs to harness in order to take its initial steps into the greater world scene. For this viewer, the L. Ron Hubbard figure was essentially incidental, compared to Quell's greater meaning. To wit, any movement, political or religious or media, needs the violence of shadowy figures such as that of Quell, needs their brute force and "thoughtlessness", if for nothing else than to act as foot soldiers as they gain ground within the world. Whether they actually physically assault real or perceived enemies, or simply provide the requisite intimidation, their harnessing and use by these movements is critical. Of course, once a given movement finds these mute, shadowy, violent forces to be of no further use, they are cast aside. The Movement can now begin the task of filing down its sharper edges, the better to seduce the greater mass, for profits monetary, psychic, or both. Hubbard, the man, is neither the first nor the last to have engineered that kind of action.