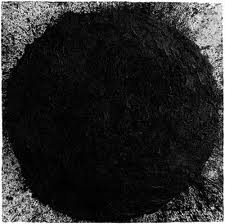 Disaster Amnesiac made it over to San Francisco MOMA to check out the exhibit of Richard Serra's drawings, along with Mrs. Amnesiac and our pal Cynthia.
Minimalism always brings out an interesting response from people. I heard one waggish teen put it bluntly: "this SUCKS". There were also plenty of bemused looks from various viewers.
That said, I loved the work. Serra's stark, paint stick-on linen works were very complex, despite their outward simplicity. The textures, pocks, lines, and drips that different light angles revealed within them were wondrous for this viewer.
Disaster Amnesiac was also reminded of Nordic Black Metal as I gazed up into these works that were tacked onto various gallery walls. Their immense blackness would surely go well with some Burzum or Darkthrone. I could definitely see Fenriz appreciating their stark black forms.
The linen works had the same mass of volume as Serra's metal sculptures in many aspects. The weight and feel are very similar, and the fact that this effect was achieved with cloth is amazing.
Serra's paint stick-on homemade paper were amazing as well. With their black forms on white space configurations, they had the feel of Zen drawings. Some had impasto inches thick. I marveled at the amount of drawings Serra must have done to get that effect. Striking.
Also on display were many notebooks with plans for his large scale sculptures. It was cool to see the early imaginings of these monumental works, especially those at Bilbao.
Disaster Amnesiac left the gallery thinking about Minimalism and its effect on the viewer. In my opinion, Minimalism offers a lot of freedom to one who is taking it in. The viewer's perceptions are free to go wherever they go, unencumbered by representation. It also offers the chance to be disciplined and attentive. When these aspects of the mind are employed, its vistas are endless. That sucking sound heard by the surly teen was the sound of his own ignorance. Given time, I hope that he will cultivate the willingness and discipline to gaze at the vastness that Serra's art can offer. 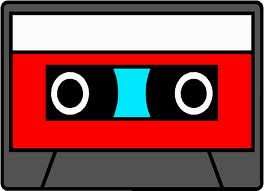 Disaster Amnesiac downloaded Pere Ubu's most recent demo release for their forthcoming Lady From Shanghai record over the weekend. Hearpen clearly states that many of the tunes on the release are still quite embryonic, while others are near completion. The whole thing is "nowhere near" mixed. I just wanted to chime in and say how brilliant it seems, from a marketing perspective, for Pere Ubu to do this. In an era of the hyper-niche market, it makes absolute sense for what is probably the ultimate niche market band to do this. It lets the the band's hardcore fans glimpse into its process, something that Disaster Amnesiac is sure appeals greatly to many of them. It provides revenue to Ubu, something that Disaster Amnesiac is sure appeals greatly to the band, if for no other reason than to help pay production costs for the album. It's a spin on the Kickstarter patronage system, a logical, effective way for underground bands to operate their business. As usual, David Thomas is WAY ahead of the curve, blazing trails that others will likely profit more from. At least he'll get the satisfaction of saying "I told you so", or maybe something harsher. Disaster Amnesiac has seen him be that way. He earns the privilege again and again. 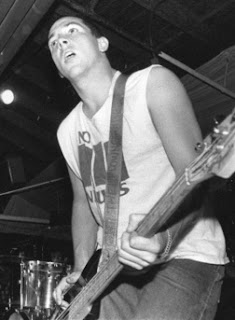 Billed as a revisiting of songs that Chuck Dukowski wrote for early 1980's Black Flag, only to have been rejected, Black Face has had Disaster Amnesiac intrigued since my good pal Max Sidman told me about them in September. Needless to say, I put a pre-order in at the earliest possible opportunity. It has arrived. I have listened.
Opener I Want to Kill You is a fast paced, stop/start Hardcore rant, featuring excellent, throaty declamations from singer Eugene Robinson. The lyrics are definitely evocative of the Creepy Crawl/My War paranoid vibes that characterised the early 1980's iterations of the Flag. Musically, it reminds Disaster Amnesiac more of SWA than Black Flag, owing to its bass-driven, stuttering feel and more blatantly psych-colored guitar sound from Milo Gonzalez. It seems as though it's very difficult to approximate the physical weight of Ginn's riffing, especially of that within Black Flag.  Drummer Tom Dubrov does a nice job of keeping the quick pace of the song flowing without ever resorting to the standard Hardcore oom-pah-pah blast beat approach.
On the flip side, Monster seems to tell a tale of self loathing and the desired love interest of him doing that self loathing. This song is closer to the then-emerging musical aesthetic of  Black Flag ("let the rhythm ooze"), again with bass-led and psych-fueled sounds from the strings, and heavy rhythmic trudge from the drums. Robinson sounds downright scary on this one. Although he seems to have checked his more manic vocal approach with Oxbow for a more "normal" one within Black Face, it still sounds unsettling as he comes a-courtin'.
This 7" is an impressive opening salvo from what will obviously be a great band. I look forward to seeing Black Face live!