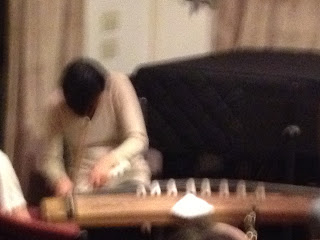 Disaster Amnesiac met up with pals Joe Noble and Andrew Joron at the venerable CNMAT house, near the UC Berkeley campus, for what turned out to be a study in contrast.
Opening act Addleds play a heavily extended technique-focused discrete music. They reminded me a lot of Stockhausen's pieces for electronics. The fact that they did this, with all acoustic instrumentation, is pretty impressive. 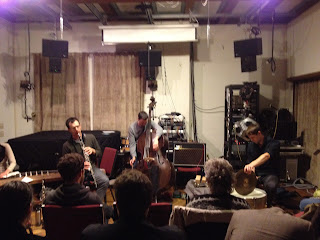 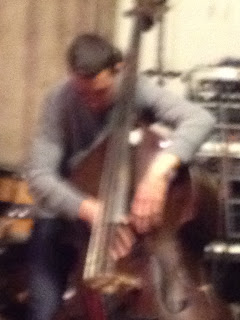 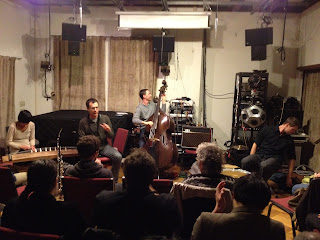 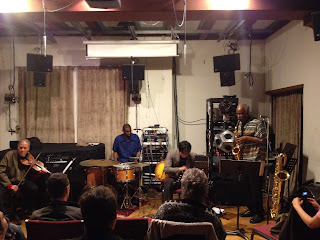 Up next, Lewis Jordan's music at Large set up and proceeded to blow the roof of the CNMAT. Made up of powerful S.F. Bay improvisers, this band plays a fiery post-Free improvisational Jazz of an incredibly high caliber. Drummer Marshall Tramell was amazing, as were violin maestro India Cooke, guitarist Karl Evangelista, and band leader Jordan. One hour of pure sonic/emotional bliss! 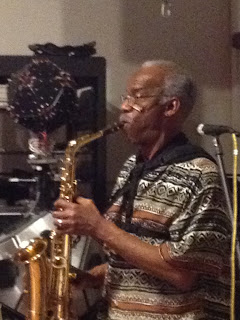 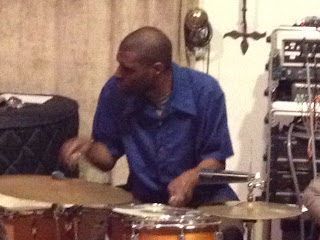 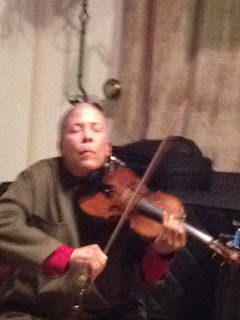 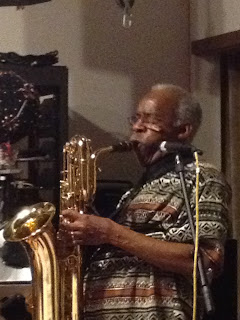 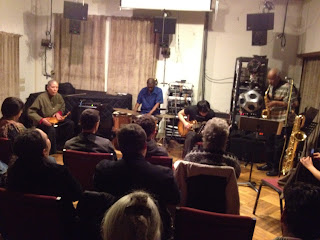 Above: Music at Large, tearing large holes in the fabric of perception. Go and see this band!
Posted by Mark Pino On Drums at 8:57 AM No comments: 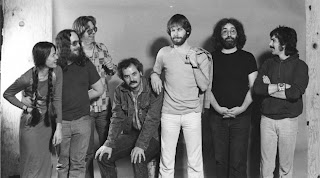 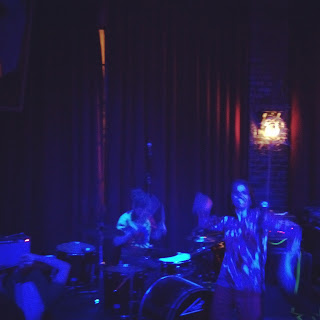 Disaster Amnesiac made it to Oakland's newest Rock bar, Vitus, at Jack London Square, to catch Chuck Dukowski's long-running band, up from L.A. Brian  Lucas met up with me there. 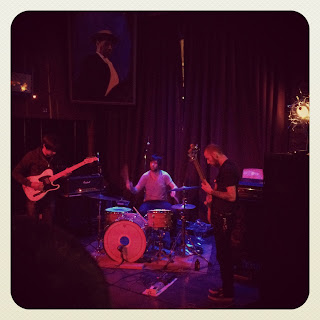 Openers Echolocation play an appealing, somewhat Desert Rock, reverb-ey instrumental music. Their sound is loose, with a great, all over the place drummer. Fine, trippy jams from these guys. I look forward to hearing them again. 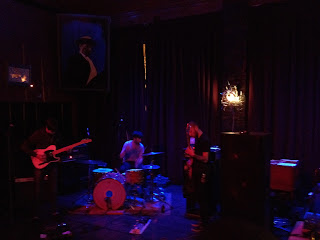 Above: Echolocation space
Below: Electric Chair Repair dig in 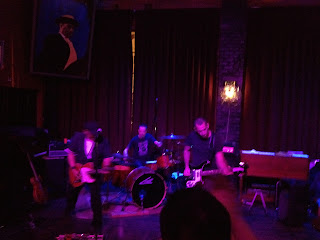 Middle band Electric Chair Repair play a lock-step, rhythmically precise, instrumental Rock. Their music is heavy, bass-driven, and driving. A bit more of a machine-tooled, U.S. heartland aesthetic to their sound. Quite enjoyable, and rocking. 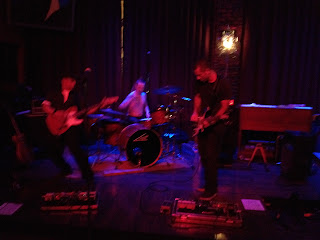 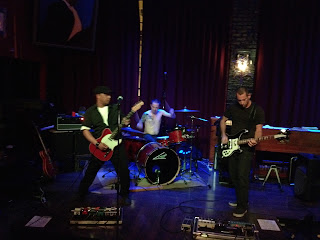 It was interesting to note that both of these Oakland bands feature front lines of Telecaster guitar and Rickenbaker bass. That said, their respective sounds were divergent enough to make for a fine opening portion of the show. 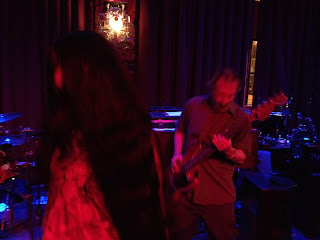 Up next, the mighty Chuck Dukowski and his band. Although billed as a sextet, this quartet, made up of Chuck, his wife on vocals, his son on guitar, and a drummer, play a heavily emotional, rhythmically shambolic freak-out Psych Rock. Although nowhere near as tidy or tight as the previous two bands, their raw, explosive set owned the evening. 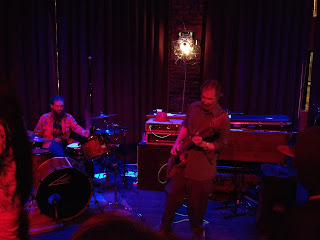 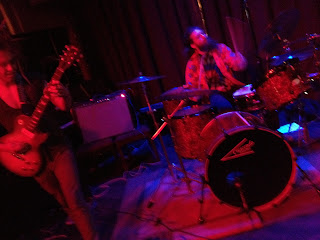 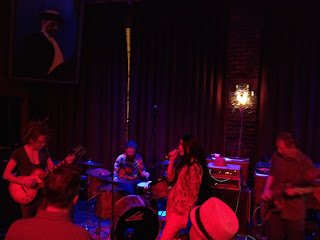 It was great to hear Chuck and his son Milo, as they played their inter-twined counterpoint, along with singer Lora Norton's unabashed wailing.
Thanks for Chuck and his band for bringing some L.A. Freak Out Energy up to Oakland. I hadn't seen them since 2003. Hopefully they'll come up this way again, with Saccharine Trust in tow! 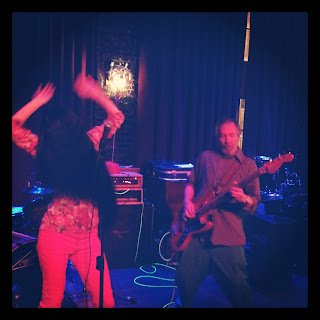 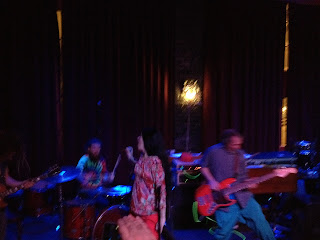 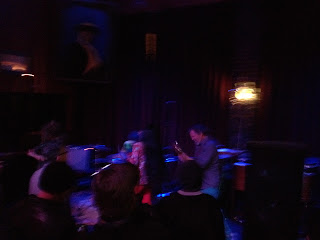 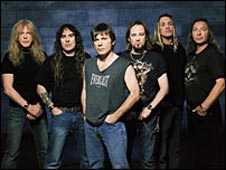 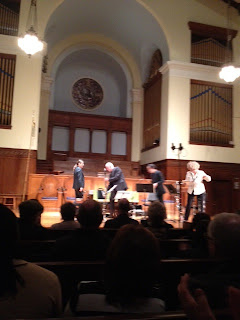 Thanks to KALX and their ticket giveaway, Mr. and Mrs. Amnesiac had the immense pleasure of attending Clarinet Thing's 21st Anniversary Performance at the lovely Old First Church in the Polk Gulch section of San Francisco.
This all-clarinet quartet, made up of Sheldon Brown, Beth Custer, Ben Goldberg, and Harvey Wainapel, all of whom are incredible players, played pieces of Jimmy Giuffre, Duke Ellington, and Dizzy Gillespie, along with their own compositions. It was instructive and delightful to listen to their Chamber Jazz versions. The all-woodwind approach reminded Disaster Amnesiac of the harmonic subtleties that the best Jazz compositions feature. 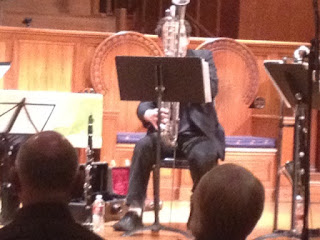 Above: Ben Goldberg wails on the contralto "paperclip" clarinet

Naturally, this being Jazz, all four members took solo turns, and all members played them exceedingly well. I felt happy to live in an area with so many talented musicians. 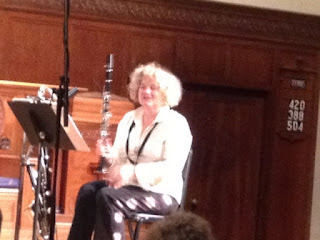 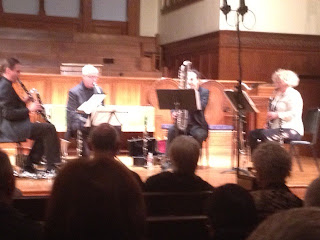 Posted by Mark Pino On Drums at 8:55 AM No comments: