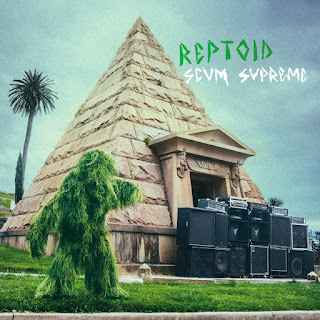 A few months back, Disaster Amnesiac had the pleasure of being surrounded by the fearsome sound and energy of Reptoid at Oakland's Golden Bull. It was fascinating and impressive to watch and listen to this manic one band as he plowed through an energetic 45 minute set; the guy was seriously pushing some air, his sounds attacking the audience with blast upon blast of tight, intricate pieces for electronics and drum set. After the set, his merch table had a sign that advertised an upcoming 7" release. He had me before the last notes of his set rang out, that's for certain.
Due to a busted turntable, now replaced, and general life stuff taking up a ton of time, Disaster Amnesiac had not been able to delve into my copy of Scum Supreme for a bit, but over the past few days I've had time to groove to its sounds, and they're kicking my ears' ass just the same way that Reptoid's live set did.
Over the course of what appear to be four tracks on the vinyl (three tracks listed on the cover), drummer/electronics controller/vocalist Jordan Sobolew thrashes and pounds his kit with over the top strength, rolling over his toms and snare as he shreds the tunes' synth arrangements. The latter are crazed,  glossy, glassy, whirling tones that leap off of the vinyl and surround the listener with their high end, treble attacks. No mere effects, though, these sounds work to make their songs quite melodically effective.
The drumming is a real highlight, at least for this listener. Sobolew is kicking serious butt with his playing, and Disaster Amnesiac, having seen him do his thing live, knows it's the real deal. His gruff vocals, shouted atop the musical melee, convey some serious angst with their Punk Rock demonstrativeness. Reptoid ain't singing about good vibes and mellow flower people, that's for sure.
The sum total of this short ride is a strong, heavy, and wrenching one. Scum Supreme strikes me as a cleansing purge, Reptoid pushing through all of the negativity that he perceives and arriving at a shimmering, metallic, peacefully drained space.
It's worth the slog, that's for goddamn sure.

Posted by Mark Pino On Drums at 6:17 PM No comments: