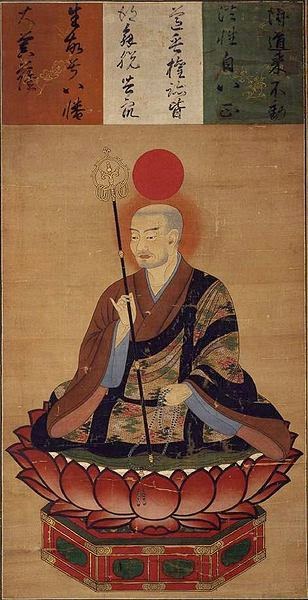 After having such a nice listening experience from Osamu Kitajama's Benzaiten, Disaster Amnesiac got to thinking about all of the great percussion music, world wide. After digging through my library's stacks for discs appropriate for the Up Half-Known Roads series, I settled on a few by Kitajama's fellow Nihon-jin, Keiji Haino and Shoji Hano. These two discs both go deep into their respective personal sound worlds and visions, and, much like Kitajama's great work, adeptly blend the aesthetic of their home island with sources from other parts of the world. Brew up some strong green tea and enjoy! 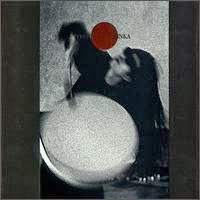 Disaster Amnesiac could possibly posit that this CD is more of an Electro-Acoustic release than a straight Solo Percussion one, but, that said, Haino's focus sounds pretty clear percussion based throughout. The proceedings evince an air of Shinto/Gregorian fusion: resonant metals are struck and let to ring, while Keiji chants his very Medieval sounding vocalizing and poetry. His use of overdub, in order to blend these elements, is great, and it provides a rich, spooky sound environment for the listener to inhabit. Drums are slowly beat and scraped with chains, chimes are struck and let to wobble until they stop, metals are bowed; the whole affair has a very ritualized feel. Deeper into the disc, a slightly more melodic turn is taken, as de-tuned biwa and reeds are played, the reeds getting especially human vocal sounds as he recites his inner, darkened visions. Beautiful, spacious music for late night trancing or early morning comin' down. Percussive as in impact. 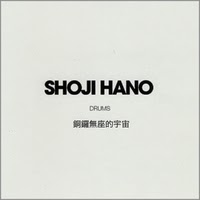 Percussive impact is very much the main focus of Shoji Hano's playing on Drums, wherein the listener is treating to five purely solo drumming excursions. Hano's incredible stick control techniques and righteously good tuning make for some great sounds. It's tough to overstate just how musical his playing is. He sounds as if he divides the trap set into discrete zones almost, moving from, say, the tom tom zone, to the cymbals zone, layering patterns atop one another from each. His drum tones ring out high pitched and clear, his cymbal tapping shimmers, and his feet make the high hat dance along with occasional accents of bursted sound. There is a very distinct call and response feel to his overall aesthetic, even when he switches to the brushes. Disaster Amnesiac has wondered whether Shoji is imagining the sounds of other instrumentalists going as he plays his solo music; there would definitely be space for them within the musical percussion matrices that he sets up. Drums differs from Tenshi in the fundamentally pointillist feel of its personal musical ritual action, as opposed to the the  wider sound spaces of latter. Still, there is plenty of mystery to contemplate therein.


In closing, Disaster Amnesiac would like to ask anyone currently in the know, as regards great Japanese drummers of the Free/Improvised music variety, who are they, and where can I find examples of their iki? 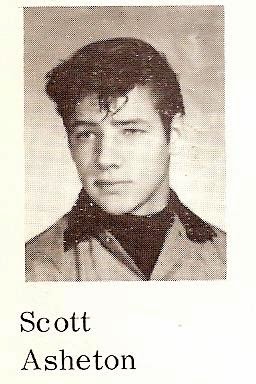 Disaster Amnesiac first heard the Stooges in about 1986, when I was in 9th grade, through my pal Patrick O'Leary, who lent me a tape that had Funhouse on it.
Their music hit me immediately. I absolutely loved the primal, primitive, grooving drumming, along with, of course, Iggy's demented front man spiel and Ron's wildly psychedelic guitar riffs. A copy of their debut was quickly acquired, on which Disaster Amnesiac found even more of that hot, simple beat. Anyone that has listened to The Stooges should know what I'm talking about: the simple, iterative patterns that develop into swinging, locked groove movements that carry the tunes.
As I ponder Scott Asheton's drumming, I keep coming back to the thought: as Johnny Ramone made it OK for a certain generation or two of individuals with limited initial talents to pick up guitars and just GO FOR IT, then Scott Asheton is very much his equivalent for those who were inclined to pick up sticks.
Scott Asheton's spare patterns on tunes such as No Fun (that intro!), 1969, I Wanna Be Your Dog, and Dirt (again, with intro!) are Rosetta Stones for a certain type of drumming that, while on its surface can sound primitive to more "sophisticated" ears, is a truly effective, physically moving approach. Rock Action's action showed many, "hey, you can do this, too."
Disaster Amnesiac is among that demographic, and I'm still grateful to Scott Asheton for the encouragement. Godspeed, Rock.
Posted by Mark Pino On Drums at 7:57 AM 2 comments: 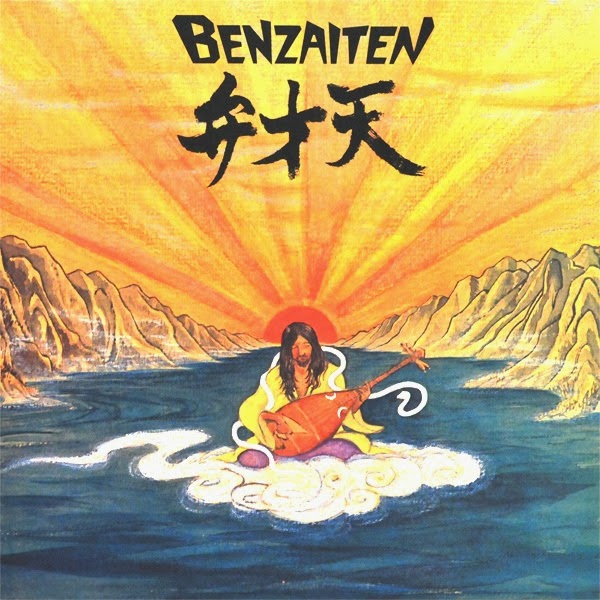 While listening to Benzaiten, Osamu Kitajama's brilliant 1976 release, Disaster Amnesiac is reminded of the Jello Biafra interview in RE/search's Incredibly Strange Music II, in which the renowned record collector speaks eloquently and at length about scores of records that he's collected. Jello's admission of being particularly enamored of releases that contain mixtures of Rock 'n Roll or Rock with the music of non-U.S. cultures applies here. The music recorded for Benzaiten features amazing mixtures of Kitajima's native Japanese Folk and Classical sounds with electric, and Psychedelic specifically, Rock influences.

Starting off with the almost Avant Funk of Benzaiten (God of Music and Water), a track that sets the general blended tone of the entire LP, Kitajama mixes thick bass lines with high pitched Japanese drums, flutes, and chanting to the sounds of Urban America circa mid 1970's.
Regal sho tones bring in Taiyo (the Sun), in which the listener is treated to a slow burbling mixture of drum machine and spaced percussion, along with beautifully strummed acoustic guitar and some seriously moving shakuhachi blowing that frames the chanting action of Kitajama. Wonderfully emotive and mysterious. His guitar playing is seriously cutting on this track, too.
More cutting guitars usher in the Heavy Metal/Noh fusion (eat your hearts out, Kiss, this stuff sounds so much better) of Tengu (a Long Nosed Goblin), whose Black Metal-like title is easily justified within its Japanese indigenous Folk and stomping, heavy Ace Tone Rhythm Machine pairing. The tune seems at times to sound as if Crazy Horse had gotten baked at Ryoanji and JAMMED, seriously spaced out within a Shinto mental matrix.
Side two, essentially on long Sino Psychedelic Noh Fusion suite, begins with Benzaiten (Reprise) and its great African, Mexican, and Japanese drumming, along with prickle-ey guitar, biwa,  and marshal Shinto chanting within its ritual space. This one gets down to some seriously swirling fusion music, a fusion of many different streams, all reaching a mysteriously enchanting ocean. This ocean drinks in the sunlight of Kitijama's musical thoughts and reflects pleasure onto the listener.
Benzaiten draws to a close with the wind swept live immediacy of Whoma (Immortality), in which a dramatic Kosmiche Gagaku sound is drawn from subtle guitar virtuosity that leads to really mind blowing shakuhachi soloing from Tatsuya Sano and punchy, high note percussive stabbing. Kitajama takes the listener out on waves of strumming that would not sound out of place at the Amon Duul commune or at Les Rellizes Denudes crash pad, while Sano beautifies it with purely Japanese tonalities. Disaster Amnesiac cheers right along with the audience, every time.
In the RE/search article sited above, Biafra bemoans the fact that more bands won't be brave enough to try and meld their own cultures' music with some serious ass kickin' Rock 'n Roll in order to develop new blends for the world's listening pleasure. A tall order, for sure, especially in light of all of the layers of obfuscation that lie between the creative act and the possible delivery of documentation of said creative act to a wider listening public. Disaster Amnesiac is thankful that, at some point in the early 1970's, Osamu Kitajama managed to conceive, document, and convince a label with good pressing plants to deliver the masterpiece that Benzaiten truly is. Some really enjoyable, real World Music can be found therein.
Posted by Mark Pino On Drums at 12:57 PM No comments: