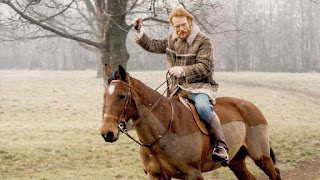 This morning Disaster Amnesiac spent some time listening to Ginger Baker's last album, Why? Dunno if you've heard it, but for me, it brings to light the diversity of musical expression that Ginger was able to wring from that aspect of his crazed life.
He started out with Jazz, moved on to the Blues and Heavy Rock, then began to incorporate the music of West Sub-Saharan Africa, and this only the first half of his career! The second half had him surprising Punk Rockers as he slammed beats for John Lydon, developing incredibly unique Fusion music with Bill Laswell and finally returning to his beloved Jazz, that last move probably being incredibly sweet for him as he was greeted with open arms by several of his musical heroes for it.
It's no secret that the man had a completely bonkers tack to his personal life. Surely there was much personal damage, alienation, and outright neglect towards those closest to him.
That said, Disaster Amnesiac has always marveled at his drumming skills, especially on releases like Album by PiL and his incredible 1989 Middle Passage. It's that unmistakable sound of his tom toms, paired with the incessant 2 and 4 click of his hi-hat that has me coming back often. Ginger's drumming surely isn't everyone's cup of tea, but Disaster Amnesiac has loved it for years, and will continue to do so.
Goodbye Ginger. May your spirit travel to where it needs to go. Those of us who were touched by your sounds will continue to bob our heads and tap our feet at your downbeats, as reliably consistent as the days are long.
Posted by Mark Pino On Drums at 4:59 PM No comments: